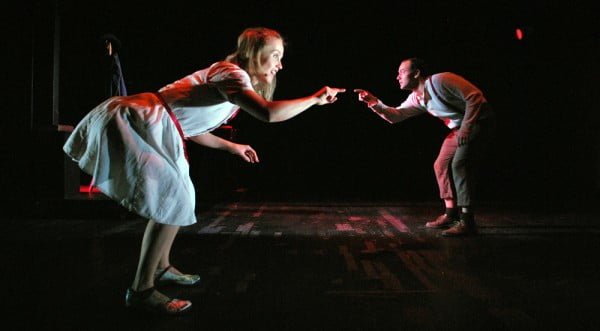 Amber Borotsik and Mark Jenkins in One

A juried festival of independent theatre, Toronto’s Summerworks blooms in August every year, offering a bouquet of dramatic delights. Here are a few reviews:

Would you go to hell and back for someone you love? That’s the concept behind this outstanding production, based on the Orpheus myth told from the woman’s point of view. Written by Jason Carnew, directed by Eric Rose and produced by the Alberta-based Redtoblue Performance company, the play is outstanding, reminiscent of some of the best of The Electric Company, a British Columbia-based group known for its physical theatre. Resembling an Alice in Wonderland character in her white dress and pantaloons, Amber Borotsik is excellent as the bereft lover, Philistine, who faces terror to reach her partner, George, played with gentle strength by Cole Humeny. Keith Wyatt is perfect as the nightmarish, stonewalling bureaucrat, perhaps a nod to Jean Paul Sartre’s notion that hell is other people. Kristi Gunther-Hansen does a great evil turn as Elishiva, a devilish Acid Queen character. Add evocative lighting and choreography and the result is a richly sensory romantic tale that captures the yearning and heartache of two lovers as they become one.

When German philosopher Martin Heidegger meet student Hannah Arendt in the 1920s, their love affair inspired both of them before she fled from the growing Nazi threat in Germany, moving to France and then the US. The relationship was only revealed in the 1990s, inspiring Calgary philosophy professor Mark Migotti and his playwright cousin Richard Sanger to create Hannah’s Turn. This production is seamless and smooth with tight direction by Mary Francis Moore. Severn Thompson does an excellent job of depicting Hannah’s intellect and passion over a 30 year period. Martin is played by Richard Clarkin with an appealing physical presence and a brooding sense of his own power and loss. The two have a great chemistry on the stage which is critical to the play. Leora Morris plays the researcher and writer, acting as a foil for the others.

This is an unflinching glimpse inside a women’s prison written by Karin Bolette Sonne, who has seen firsthand the frustrations and desperate need of the inmates in a system that offers little support beyond the camaraderie of the other incarcerated women. The ensemble cast (Soo Garay, Jonelle Gunderson, Jajube Mandiela, Erin McMurtry and Tanisha Taitt) is exceptionally strong, and director Kate Lushington keeps the action flowing and the scenes varied and compelling in what is a challenging theatre space.

In the best satirical Jonathan Swift tradition, Out at Sea concerns three men adrift in a lifeboat who must decide which of them should be eaten to sustain the others. At times hilarious and definitely thought-provoking, this play was written in 1960s communist Poland Slawomir Mrozek and revived by director Aleksander Lukac. The farcical dilemma allows us to weigh our human social traditions against our basic primal urges. Think Titanic meets Lord of the Flies. The fine cast includes Gordon Bolan, John Fitzgerald Jay, Andre Sills and Sam Malkin.