Book review: ‘Hopper: A Journey Into The American Dream’ 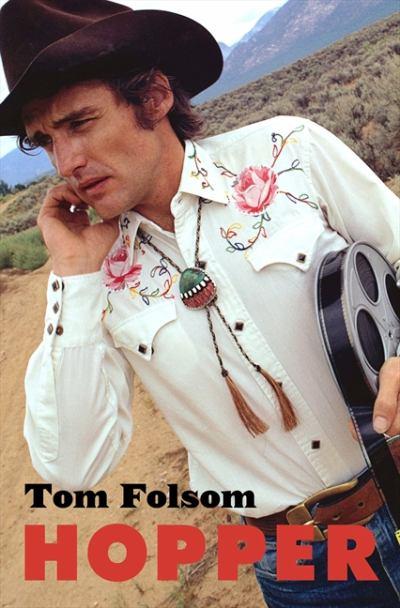 Hopper: A Journey Into The American Dream
Author: Tom Folsom

Much has been made of the rise and fall then resurrection of such mercurial actors as Robert Downey Jr. and Mickey Rourke but there was an actor/filmmaker/artist that came before them that made those guys look like members of some private school debating team–his name was Dennis Hopper.

Author Tom Folsom’s new book on the raging life of Dennis Hopper is a compact and furious read and it paints a rather even-handed picture of a guy whom many simply wrote off as a drug-addled lunatic forgetting that the drug-addled lunatic was also the guy who almost single-handedly revolutionized cinema.

Hopper came up at the same time as such young actors as James Dean (whom Hopper idolized and worked with on two of Dean’s three films–Rebel Without A Cause and Giant) and Marlon Brando, and for a time was thought of as every ounce their equal. Then Dean was tragically killed in an car wreck at 23 and, as Folsom reveals, the wheels came off for Dennis Hopper; Dean’s death had a very powerful and negative effect on him and caused his attitude to change.

He was being hired by big name Hollywood directors but would be so combative and difficult that he quickly gained a very bad reputation. The final straw came when he was working on a film with legendary Hollywood western director Henry Hathaway, and Hathaway simply decided he had had enough of Hopper and fired him, and furthermore Hathaway sent word out to all the studio bosses that Hopper was not worth the trouble he brought to a project and was almost immediately put on the big Hollywood black list. Hopper drifted around unable to work in films but still able to pick up the odd TV gig (including a very powerful episode of The Twilight Zone in which he played a young neo-Nazi who falls under the spell of the ghost of Adolf Hitler).

In the late sixties Hopper and pal Peter Fonda were living in that weird cultural suspended animation–they were living the sex and drugs counterculture lifestyle but at the same time they were well off Hollywood brats. Wanting to “explode into space” as the Steppenwolf song of era went, the pair raised a small amount of money and set off to write and produce and direct a new kind of movie, a kind of new era western that used choppers instead of horses and the two main characters were not cowboys or gunslingers but drug dealers. The film they made was Easy Rider and the smashing success of the film literally rewrote the rules of moviemaking in Hollywood almost overnight.

The staggering success of Easy Rider put a lot of pressure on Hopper–he knew he had it in him to repeat the success but drugs and the drug culture of the time mixed with his sudden new found wealth was a combustible combination. Folsom’s book painfully pieces together this lost and painful period of Hopper’s life that, all things considered, should have been the final chapter in that life. But Hopper just kept on keeping on.

Now it is the late seventies, the legacy of what Hopper started a decade previously with Easy Rider was the greatest decade in American cinema ever–one of its leaders was Francis Coppola who was embarking on his follow up to his grand successes with The Godfather and The Godfather Part II with a psychedelic operatic opus on a grand scale–Apocalypse Now. Against the advice of everyone and against his better judgment Coppola gave Dennis Hopper his break for a big screen comeback. Hopper delivered even though his character seemed to confirm that he had in fact gone insane.

In fact, Hopper was going in exactly the opposite direction–he was getting it together and cleaning himself up. All of a sudden it was okay to hire him again so he was working steadily–then in 1986 he made two films and was nominated for an Oscar–but for the wrong film. The two films were Hoosier, a nice film about high school basketball with Gene Hackman and Blue Velvet–the nightmarish, monstrous, but very effective David Lynch film in which Hopper played Frank Booth, a bad guy so repugnant and sickening that Hopper once told me ever since playing people would cross the street rather than walk on the same sidewalk that he was. Hopper’s indelible characterization of Booth was by far a better acting performance than the washed up drunk in Hoosiers but Hollywood simply wasn’t going to nominate him for playing such a sick guy as Booth, so happily the Academy just printed Hoosier on the nomination card instead of Blue Velvet and everything was good.

Hopper’s new found respectability in Hollywood lead to him stepping behind the camera to direct films he wasn’t in–like the controversial film Colors with Sean Penn about L.A. street gang and lead to him buying a spread in Venice Beach and turning it into an artists refuge where painters and photographers and musicians could hang out. Hopper would go on to publish a number of books featuring his photography work that were praised in the usually hard to please art world.

Hopper died in Venice Beach of cancer at 74 in May of 2010–and as this excellent book reminds us–this misfit of a little kid born in Dodge City, Kansas made an impact of his chosen profession that was so huge even he never really realized the true scope of what he had achieved–and in some ways, that is exactly as it should be.