Soulpepper’s ‘A Raisin in the Sun’ 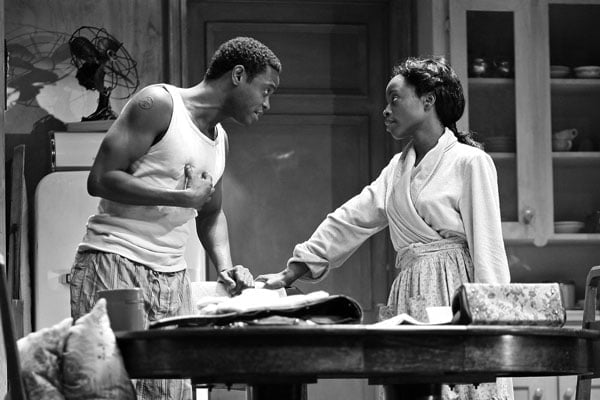 Charles Officer and Abena Malika in A Raisin in the Sun

A richly textured play that eloquently captures the zeitgeist of the post-war society in the U.S., A Raisin in the Sun is just as relevant today. In Lorraine Hansberry‘s powerful play, the characters are on the cusp of a new era of civil rights marches and affirmative action. But they struggle to realize that the pursuit of the American Dream does not replace family honour.

The Soulpepper production (a co-production with Theatre Calgary) is sensitive and well-cast, grabbing the audience by the lapels and never letting go.

The play examines material wealth and pride and how one doesn’t necessarily follow the other. When the insurance cheque arrives, mother Lena Younger is faced with a tough decision: what to do with the windfall that her husband paid for with his life, money that is her husband’s legacy, money that will alter the family’s fortunes.

The eye of the storm is Lena’s son, Walter Lee, played with tightly-wound precision by Charles Officer. A chauffeur, he wants to invest in a business. His wife Ruth (Abena Malika) longs for a home. Lena’s daughter Beneatha (played with perfect insolence by Cara Ricketts) is a university student and needs the money for medical school. Beneatha’s two boyfriends, one a cold-blooded capitalist (Michael Blake) and the other a Nigerian (Awaovieyi Agie) urging her to return to her roots, are symbolic of the growing diversity within the black society.

I was swept away by Hansberry’s dramatic dialogue, kitchen table talk elegantly distilled into the essence of what really matters. “Once freedom used to be life. But now it’s money,” laments Lena. “It was always money. We just didn’t know it,” retorts Walter Lee.

The cast consists of a group of film and theatre veterans who honour this fine play with their efforts. Lena, the matriarch, is captured with world-weary pride by Alison Sealy-Smith, the founder of Toronto’s Obsidian Theatre Company. Malika is fragile but feisty as Ruth and enhances her performance with her fabulous and soulful singing voice. And Kofi Payton, as Lena’s young grandson Travis, handles the large role with balanced maturity.

The playwright’s own story formed the basis of the play. Lorraine Hansberry, who came of age in post-war Chicago, saw her own father battle racial prejudice as he sought to purchase a home in a white neighbourhood, asserting his legal rights all the way to the US Supreme Court. Hansberry herself was a pioneer as the first black female playwright ever to have her work appear on Broadway.

Tragically, Hansberry was only 34 when she died. She had completed five other plays, but A Raisin in the Sun is the one that endures as her seminal play.