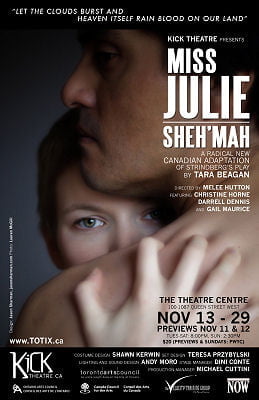 Swedish playwright August Strindberg‘s masterpiece of class conflict has been adapted successfully in Kick Theatre’s inaugural production, playing at the Theatre Centre until Nov. 29. Miss Julie was originally published in 1888, a tortured tale of an aristocratic young woman who has a sexual dalliance with her father’s servant.

While class distinctions have largely lost their shock value when it comes to love affairs, Canadian playwright Tara Beagan has added a racial angle by setting the play in 1920s in the Nicola Valley in northern British Columbia. Incidentally, her grandmother and later her mother worked on an Englishman’s ranch in Merritt, B.C. Hence her addition to the title: ‘sheh’mah’ means white person in the Ntlakapamuk dialect.

The set, designed by Teresa Przybylski, effectively creates a soaring watercolour mountain vista while framing the interior, complete with spare furnishings and woodstove, all in a rather challenging black box venue.

As the coquettish Miss Julie, Christine Horne is a strong performer, giving the character a coltish fragility. As she pirouettes in her flapper gown, she is both pedestal material and come hither femme fatale. It doesn’t hurt that she resembles a young Mia Farrow. By contrast, her character spews forth the worst kind of offensive notions about the aboriginal servants being more animal than human. While the record of white-aboriginal relations has not always been congenial, this ranting seems exaggerated in the Canadian context.

As Jonny the servant, Darrell Dennis is a powerful physical presence but seemed less confident about his lines. Still he plays the conflicted Jonny with a tightly-wound energy as he struggles to behave as properly as he perceives his employer’s family does. He tries to be a pragmatist before Miss Julie cracks the veneer of strength over his secret yearnings. “Love is a luxury for those who can afford it,” he claims. These are two characters who completely misunderstand each other. Not only has she given up her honour during their frenzied cabin sex, but he has betrayed the trust of his mate, Christie Ann. He is horrified to discover Julie is just as powerless as he. Their spiralling conversation examines some hard feminist and racist ideas in this historic setting.

Deftly played by Metis director and writer Gail Maurice, Christie Ann is Miss Julie’s foil, a hardworking and faithful cook who holds still in the centre of this dramatic and ultimately tragic storm.

Overall, Kick Theatre (launched by Melee Hutton and Christine Horne) has created a powerful and memorable piece of theatre adaptation that contains all the gems of the original. It’s a challenging play both for the actors, who must enliven far more talk than action, and for the audience – there is no intermission in this two-hour dramatically taut production. Watch for more intriguing performances from Kick Theatre in the future.