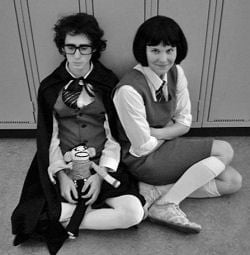 Vaudeville for the 21st century is the only way to describe the fast-forward production, Legoland, running at Theatre Passe Muraille. The one-hour show is a tale of innocents abroad in the world, told with music, puppets and a comic narrative. Siblings Penny and Ezra Lamb (played by Celine Stubel and Amitai Marmorstein) are home-schooled chidren on a hippie grow-op commune in Saskatchewan. After their parents are busted, they are sent to a Catholic school from which they escape to go on a rambling road trip to Florida to follow a teen pop idol turned gangster rapper.

Legoland was the characters’ parents’ term for the world outside Elyssian Farms, and the Lamb siblings’ exploits from panhandling to eating at Mcdonald’s – all new experiences – for the basis of the performance. Stubel is excellent as the apologetic teenager and Marmorstein is a great foil as her Nietzsche-spouting brother whose deadpan delivery and faux English accent are reminiscent of Stewie on TV’s Family Guy. Both UVic theatre grads, the actors handle their parts, including the physical comedy, with the skill of stage veterans.

Produced by a Victoria company called Atomic Vaudeville, the show has won a handful of awards on the Fringe Festival circuit. In fact, if you like Fringe Festival-style theatre, you’ll laugh out loud at this outrageous production. AV founders’ thumbprints are all over this show. Jacob Richmond wrote the script and directs the tightly-paced show with co-founder Britt Small.