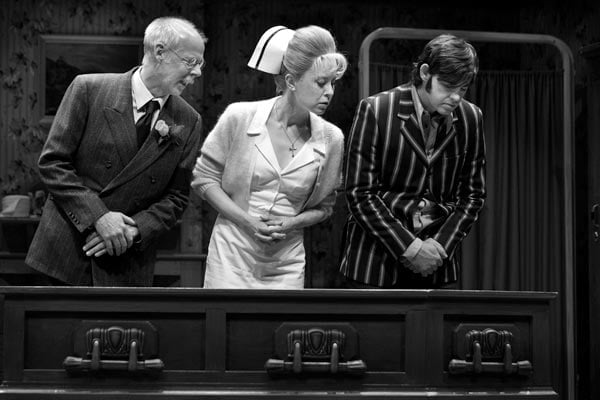 On until August 1
The Young Centre – 55 Mill Street

Money makes the world go around, they say, and in Soulpepper’s latest production, Loot, it’s what makes this farce fly. Old Mr McLeavy has no time to grieve for his dead wife. His wife’s nurse (Nicole Underhay) is distracting him with her charms. His son Hal (Matthew Edison) and Hal’s boyfriend Dennis (Jonathan Watton) have robbed a bank and find an ideal hiding place for the loot in her coffin. Now what to do with the corpse? And how can they keep one step ahead of McLeavy’s gold-digging nurse, and Truscott (Michael Hanrahan), the mysterious man from “the water board?”

Directed by Jim Warren, who ably stickhandled Black Comedy last season, Loot is as good as it gets in this production. The strong cast develop their outsized roles with varying degrees of success. Oliver Dennis, as the grieving, befuddled widower McLeavy, shows off his mastery of physical comedy. Nicole Underhay as Nurse Fay sashays and wheedles her way through with just the right amount of vulgarity, reminiscent of the classic, bawdy British Carry On comedies. Finally, Hanrahan gives Truscott, the police inspector, a delightfully dim air of egotistical illogicality.

Some of the social commentary (targets include British integrity, religion, fidelity), biting and controversial though it might have been in 1965, is definitely less humorous now. As a result, there seemed to be lulls in the stream of laughs while the script features jabs at the Catholic church.

As usual, it’s the playwright’s backstory that enhances the fiction. Orton died at the age of 34, murdered by his lover, Kenneth Halliwell in London. For him, life did really attain the dramatic heights of his fiction.