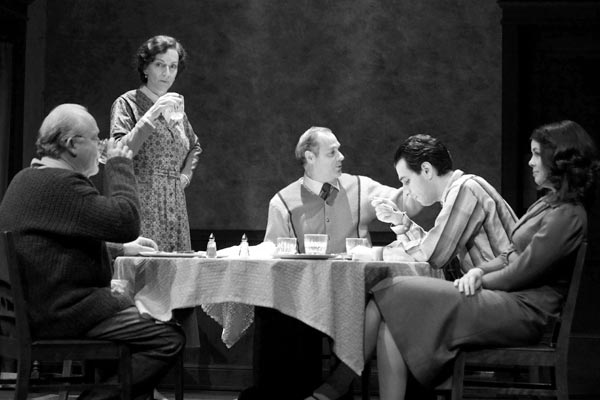 On until July 31
The Young Centre – 55 Mill Street

Clifford Odets’ kitchen sink drama, first produced in 1935, revolves around a Jewish family’s struggles to survive in the Bronx during the Depression. Odets’ play was back on Broadway in 2006, earning the Tony award for best revival that year. By 2007, it was playing in London. Now Soulpepper’s competent production brings the play to Toronto audiences.

As usual with Soulpepper, the play receives excellent treatment from the company’s talented members. Peter Hartwell‘s set design captures the bleak apartment handily while creating an unusual centre hall entrance to manage the action. The flaws in this production lie with the script itself as Odets muddies the message in this ensemble effort with too much drama: a suicide, a pregnancy, a quick marriage and a betrayal. It verges on melodrama.

Directed by Miles Potter, Awake and Sing! is more satisfying as a piece of dramatic history than a stand-alone theatre event. As an avowed communist, Odets reflects the attitudes of the period and gives voice to a sector that was not often heard from. Odets’ association with the legendary Group Theatre (founders included Odets and Lee Strasburg) and his later work (screenplay for Sweet Smell of Success) are more reasons to see the play.

Although the script captures the Jewish idioms, the characters’ lives seem quite secular, containing no hint of faith as though a yearning for money has supplanted every other belief system. As matriarch Bessie Berger (played by Nancy Palk) says, “Here without a dollar, you don’t look the world in the eye.” She’s a harsh realist as well as a nagging and vindictive woman as oppressive as the capitalist rat race. Palk’s braying Edith Bunker delivery gives the role a lighter tone.

The exception is Bessie’s father Jacob (played with William Webster), who quotes the Biblical passage from Isaiah that includes the play’s title. “In my day, the propaganda was for God. Now it’s for success. A boy don’t turn around without having shoved in him he should make success,” said Jacob. Paradoxically, he is also the mouthpiece for Odets’ communist leanings. In the end, even his posturing as a barber philosopher is suspect with the discovery that most of his beloved philosophy books were unread with pages uncut.

But it is the second generation, the adult children Ralph (Jonathan Gould) and Hennie (Sarah Wilson) who rage against the family’s situation and give the play forward motion, just as the children do in Tennessee Williams’ The Glass Menagerie or Arthur Miller’s Death of a Salesman. Their decisions aren’t always the right ones, as Hennie discovers. Wilson deftly captures her mercurial nature from insouciance to despair.

Disabled war veteran Moe (Ari Cohen) has his own ideas about life, giving the play depth and texture. As Hennie’s lover, he nicknames her “Paradise,” an indication of his own religion of the flesh.

Ralph’s struggles with balancing his grandfather’s beliefs and his mother’s realism are the core of the play. As he says, “We don’t want life printed on dollar bills, Mom.” Gould handles the character’s Hamlet-like uncertainty with aplomb.

This is a worthwhile production and an important play that, in the current economic downturn, can continue to resonate with audiences.