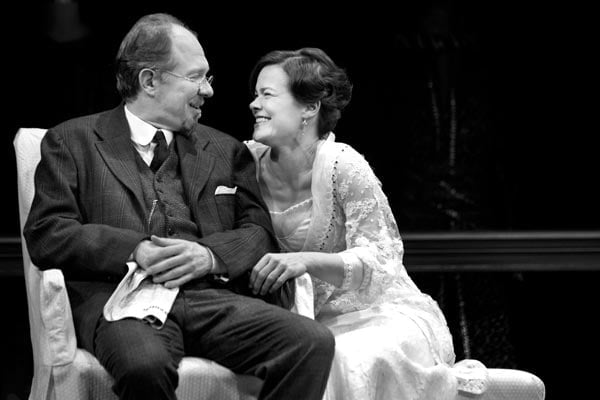 Diego Matamoros and Kristen Thomson in Soulpepper's The Guardsman

It’s no surprise that Hungarian playwright Ferenc Molnar‘s popular tale, which premiered in Budapest in 1910, was translated and has been embraced by the English theatre. The story of disguising a character to test a lover’s fidelity is a familiar one, employed in many a performance from classic mythology to Shakespeare.

In Molnar’s hands, the story becomes that of a married couple whose blissful happiness is tainted by jealousy to the point where the husband goes to ridiculous lengths to woo his wife while dressed as an ardent soldier. The question is: does she see through his disguise and play along or is she really willing to start an extra-marital affair?

To exaggerate the emotions, Molnar’s characters are Nandor, an actor (played with petulant perfection by Soulpepper artistic director, Albert Schulz) and his wife of only six months, Ilona, a much-feted actress (played by Kristen Thomson). Thomson handles the secretive and somewhat shrill diva with elegance and her actions at the end leave the plot outcome amusingly open-ended.

Supporting characters in this production are strong without over-acting, especially Diego Maramoros as the sardonic critic and confidante and Dawn Greenhalgh as Ilona’s dresser and mother-figure.

Hungarian director and Soulpepper regular Laszlo Marton moves the action along with skill and grace, never stepping over the line into all-out farce with too much physical comedy. His interpretation still delivered roars of delight from the audience as the identity of the guardsman was revealed to his wife.

The set by Camellia Koo is cleverly transformed from an elegant house to the anteroom behind the box seats at the opera with the deft use of a few curtains. This isn’t the first Molnar play that Soulpepper has produced; The Play’s the Thing was mounted in 2003. Obviously the marriage of Molnar wit and Soulpepper ability is not a relationship that needs to be tested, and the result is fidelity from the audiences. Go and see this production.