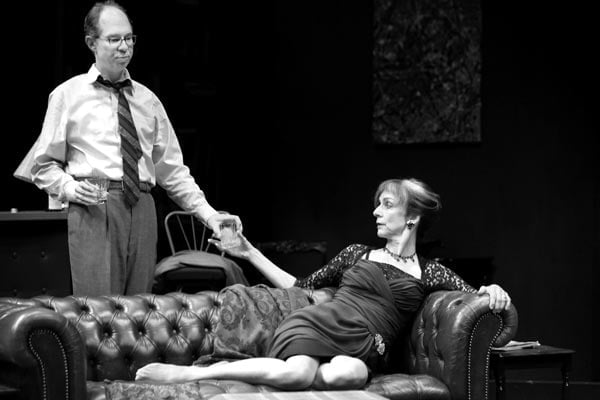 Nancy Palk and Diego Matamoros in 'Who's Afraid of Virginia Woolf'

Difficult, yes, but not impossible.

Soulpepper’s production of Who’s Afraid of Virginia Woolf is true to the hellish glimpse of the marriage of academic George (Diego Matamoros) and his domineering wife Martha (Nancy Palk). The younger couple – biology professor Nick (Tim Campbell) and his delicate wife Honey (Diana Donnelly) are invited in for a nightcap after a faculty party. Their presence offers the perfect foil for the older couple’s vicious putdowns. Director Diana Leblanc drives the play frenetically and elicits very strong performances for the most part from the four characters.

While Palk infuses Martha’s character with the requisite raunchy, vulgar spirit, she occasionally offers too much braying similar to her portrayal of the mother in Awake and Sing, presented earlier in the season. Her almost farcical approach earned laughs in some of the wrong places. Matamoros is suitably plodding and sarcastic as George, and Campbell hits the right note physically and theatrically as the Adonis-like new biology professor. Finally, Donnelly does a creditable job of presenting barely contained hysteria.

Set designer Astrid Janson has created a living room on a raked stage, making the awkwardly-placed furniture compliment the emotional twisting and turning the characters endure as they verbally joist. Portraits of George and Martha Washington sit on the bookshelf as a reminder of the main characters’ namesakes.

With three acts and a running time of three and a half hours, the play is wrenching. More than a glimpse of a twisted and dysfunctional relationship, the experience for the audience is like watching an increasingly bloody car accident unfold in slow motion.