Inside Out film fest to ‘entertain, educate and engage’ 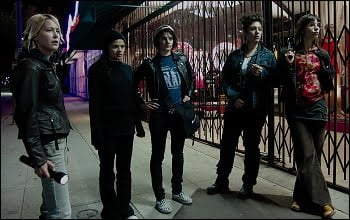 A stylish crowd gathered at Toronto’s Gladstone hotel recently to soak up the nouveau tavern decor and welcome the line up for this year’s version of the Inside Out Film Festival.

Expected to attract 30,000+ filmgoers to 276 films that examine the GLBT experience from just about every angle possible, Executive Director Scott Ferguson called the range of offerings from all over the globe “an eclectic mix of the avant garde to the accessible”. At Inside Out, Canada’s largest celebration of film with gay, lesbian, bisexual and transgendered themes, it’s never just about film. “At the heart of the Festival the community,” Ferguson says, pointing out Inside Out’s history of partnering with local GLBT organizations, and initiatives like the Queer Youth Digital Project, a mentoring program, the results of which make up one of the Festival’s many screenings. “The 17th edition of Inside Out will entertain, educate and engage.”

Brand new Director of Programming Jason St. Laurent hails from Ottawa, bringing a mix of artistic and curating experience. “Am I ever delighted to be part of the biggest edition of Inside Out ever!” he declared, before outlining some of the Festival’s highlights. The Opening Night Gala will feature a modern retelling of the Oscar Wilde classic, The Picture of Dorian Gray, given a treatment St. Laurent describes as “a visual and intellectual romp through New York’s art scene” starring 7th Heaven teen idol David Gallagher. The Canadian premiere will feature director Duncan Roy in attendance.

Korean smash hit King and the Clown makes up the Festival’s Centrepiece Gala. The film by Lee Jun-ik broke box office records in its native Korea with the story of Joseon Dynasty ruler Yeon-san and his growing infatuation for one of his court jesters. The sumptuous period piece has been described as spectacular and engrossing, and a Gala ticket includes a cocktail reception before the show. King and the Clown is part of Inside Out’s East Asia focus, drawing on a remarkable flowering of GLBT expression in areas of the world where society is still quite repressive. Other offerings in the Asian focus include The Chinese Botanist’s Daughters by Sijie Dai, and a special screening of Wong Kar-Wai‘s Happy Together, winner of the Best Director award at the Cannes Film Festival when it premiered in 1997.

Despite some murmurs in the crowd at what was described as largely gay-centric programming, with an emphasis on the lurid and near pornographic material, Inside Out will feature some prominent L-word films. The Closing Night Gala will screen Itty Bitty Titty Committee, a politically charged comedy from director Jamie Babbit, (who’ll be in attendance) and originating from LA, lesbian collective Power Up. Organizers promise a secret Hollywood guest at the screening and gala.

US Director Ned Farr‘s The Gymnast also looks to be a must see, the story of a former Olympian trying to put together a Cirque du Soleil-esque acrobatic troupe, with gorgeous visuals and, of course, a love interest. Triple X Selects – The Best of Lezsploitation by US director Michelle Johnson, is part of the Guilty Pleasures series. Johnson culled girl/girl scenes from over 20 different movies, cutting them together over a groovy soundtrack and snippets of “advice” on lesbians from scientific journals.

Anniversary screenings include the 30th birthday of Can-gay classic Outrageous, with some of the original cast in attendance, and the 20th anniversary screening of I Heard the Mermaids Singing. One of the highlight parties will surely be Double Dutch, an homage to Amsterdam in partnership with Art Metropole, and co-sponsored by underground Dutch mags Butt and Girls Like Us.