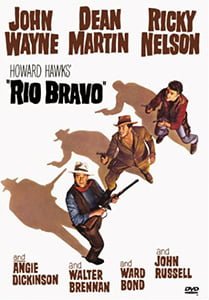 Quentin Tarantino tells a story about his love for Howard Hawks‘ 1959 Western Rio Bravo, which was rumored to have been made by John Wayne and Howard Hawks specifically as a right wing response to the hit film High Noon. Tarantino said that when he was younger and met a new girl he was interested in he would take her home to his apartment and put on Rio Bravo for her to watch… “and she better fucking like it…”

There is a lot to like in this wonderful Western, and this new 2-Disk Ultimate Collector’s Edition from Warner Home Video is the best way to see this film at home. Rio Bravo, in a digitally restored new print, was featured at this years Cannes International Film Festival in a special presentation – and take it from me, Cannes is a cool place to see any movie, but for those who didn’t happen to catch that screening – this new DVD edition is the best version that will ever be available of the film.

Personally speaking I have never referred to Rio Bravo as the best Western ever made, although it would certainly be in the top ten (after The Searchers, Red River, The Wild Bunch, The Good, The Bad, and The Ugly, and The Outlaw Josey Wales) â€“ and I say that because unlike the others on my list, Rio Bravo really isn’t about anything. A sheriff named Chance (Wayne) protecting a small Texas town while helping out an alcoholic pal named Dude (a nice performance from Dean Martin) and a young gunslinger named Colorado (a terrible performance by teen heartthrob of the day Ricky Nelson). There are gunfights, there are exchanges of dialogue about what it is to be a man and about what honor is – there are even a few songs (which was the only reason Ricky Nelson was cast in the film – to capitalize on his popularity with kids) and there is a sexy woman, played by a young Angie Dickinson to provide that sexual tension dynamic. 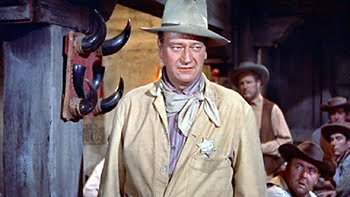 But it is that familiarity, that comfort food quality that Rio Bravo has that makes it so good, so enjoyable. This movie is pure Howard Hawks, it is pure John Wayne – this is what American Westerns were in the 40s and 50s – they were simple tales of strength and will and guts and violence – they were about the growth and establishment of a new country. Rio Bravo is a bit lighter fare than films like The Searchers (also available in a wonderful two-disk Ultimate Collector’s Edition) and High Noon but it still contains enough of the elements that make old Westerns so much fun to watch that it ends up standing out above a lot of others.

John Wayne was very good as Chance but again, this was the John Wayne persona at its most familiar. The walk, the slow delivery of his lines, the quick trigger, the underlying heart of gold â€“ and this is another reason why this film is so enjoyable – because it is The Duke!

The extras that come with this set are first rate. The commentary is done by film historian/critic Richard Schickel from Time Magazine and by none other than horror filmmaker John Carpenter who is a die hard Howard Hawks fan (he remade the classic Howard Hawks produced The Thing in 1982). There is a wonderful documentary on Howard Hawks from 1973 called “The Men Who Made The Movies” as well as two new documentaries â€“ “Commemoration: Howard Hawks’ Rio Bravo” and “Old Tucson – Where Legends Walked” (Old Tucson was the Western movie set used by Hawks to make the film – and he built his town to 7/8th scale so all his characters would appear a bit larger than life).

There are also some geek goodies in the box as well â€“ a reprint of the comic book edition of Rio Bravo and scaled down reprints of a lobby card set and press book from the original release.

All in all Rio Bravo is one of the most memorable traditional old time Westerns you’ll ever see and you will not see it better anywhere than in this two-disk Ultimate Collectors Edition.