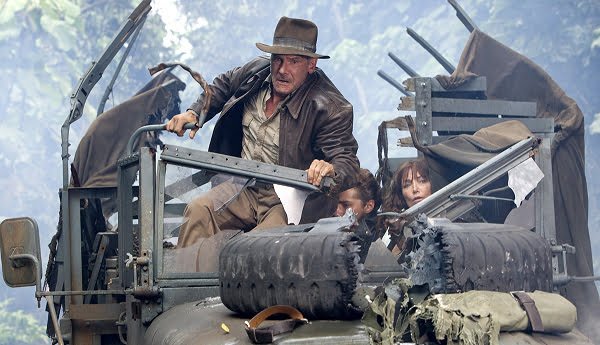 Hollywood gets serious about blockbusters this week with the return of a film icon people have been talking about for weeks. As anyone will tell you, Indiana Jones is back this weekend, and he has a lot to make up for after his nearly 20-year absence. With few other studios interested in taking on this huge franchise, there is really only one other film going up against Indy’s whip: Uwe Boll‘s latest disaster, Postal.

Indiana Jones and the Kingdom of the Crystal Skull
His adventures have captivated us for close to 30 years, and after fighting the Nazis twice, overcoming the Knights Templar, and a crazy religious group, he’s back for at least one more shot at finding another incredible, lost treasure.

After so many years away, and the unmistakable fact that Harrison Ford is not getting any younger, it was perhaps questionable for at least some of us if director Steven Spielberg and producer George Lucas could still give Indy a worthwhile adventure.

The good news for all of the fans, including a whole new generation of them who have just discovered the series on DVD, is that film reviewers have mostly great things to say about Indy’s search for the Crystal Skull.

Certainly, the series is looking a bit different since Indiana Jones and the Last Crusade, but after being screened at the Cannes film festival, most critics have been gushing about the movie.

“I can say that if you liked the other Indiana Jones movies, you will like this one,” said Roger Ebert of the Chicago Sun-Times, “and that if you did not, there is no talking to you.”

Richard Corliss of Time Magazine called the film “instant nostalgia – a class reunion of the old gang who in the ’80s reinvigorated the classic action film with such expertise and brio.” He did however warn that it’s not exactly a film trying to be fresh. “Spielberg and Lucas, and screenwriters David Koepp and Jeff Nathanson, are looking not forward but back, to the first three films.”

This means that for most fans of the series, Kingdom of the Crystal Skull will be a fun ride to remind you of all the best moments in the franchise, while taking on a new adventure. Other movie fans will have to decide how much they liked the first three films and whether they want to see the iconic Ford and friends revisiting familiar, but definitely hallowed, ground.

Uwe Boll has made a name for himself as a director of movies based on video games, and he is uniquely positioned to be one of the modern day’s most unloved filmmakers. Postal on the other hand was one of the more controversial video games of the late 1990s, which set the “Postal Dude” loose with a weapon on an unsuspecting public.

With very little original story to go on, the film adaptation stars Dave Foley and Zack Ward, along with a gang of women in commando outfits, taking on Osama bin Laden. With non-stop satire, bad jokes, and constant spoofery, Postal is meant to be an irreverent commentary on modern culture, but it’s questionable whether Boll can deliver on that lofty premise.

“Boll does mean to provoke,” Dennis Harvey of Variety said in his review, “but to pull off a satirical critique of the volatile subjects here would require sharper wit than he and co-scenarist Bryan C. Knight generally provide.”

Coming to theatres May 30
HBO’s popular series brings the ladies to the big screen with Sex and the City: The Movie, and in The Strangers, Scott Speedman and Liv Tyler are a young couple trying to live through a terror-filled vacation.