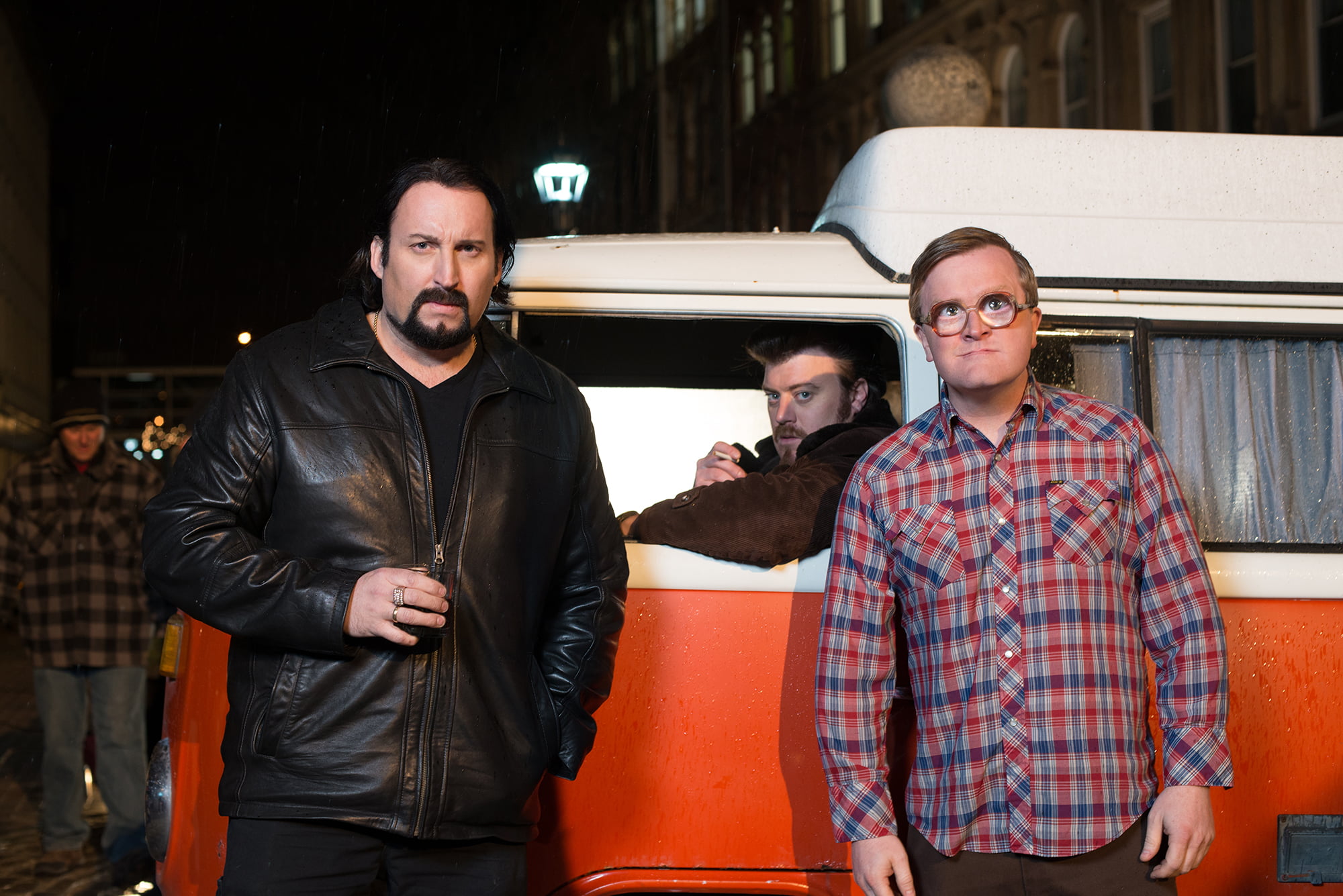 For the last 13 years, I’ve avoided the Trailer Park Boys. I grew up in New Brunswick in an area that could just have easily been the backdrop for the series, so I know what they are going for, and that didn’t really interest me. When I was offered a chance to speak with the stars of the series though, I knew it was time to take a trip to Sunnyvale and see what was going on.

After all, I may not be a fan of the series, but it’s hard not to respect the empire that the series has inspired around the world.

Kicking off in a local dump, Trailer Park Boys: Don’t Legalize It revolves around the three incredible buffoons: John Paul Tremblay as Julian, Robb Wells as Ricky, and Mike Smith as Bubbles as they try to get along after all these years. They’re also doing their best to stay out of jail, but you can probably guess how that will turn out.

To stay away from drug dealing, Julian has taken to stealing urine from a local military base, which he is packaging up for sale. Why would someone buy pee, you might ask? To pass drug testing, of course.

Meanwhile, Ricky has moved his grow-op to a house in the suburbs, and he’s thriving like never before while poor Bubbles lives under J-Roc’s (Jonathan Torrens) deck, and re-sells fried chicken from his bicycle.

For once, and despite his other two friends, Ricky is certain he’s finally going to be successful at something, but that’s when the Canadian government announces that it’s going to legalize marijuana. With the deadline for a public hearing approaching, Ricky decides that he needs to protect his illegal business by going to Ottawa to petition the politicians to keep marijuana illegal.

Since Julian’s pee trade requires a trip to Montreal, and Bubbles discovers that he has inherited a home in Ontario, it seems like a good opportunity for a road trip, except that Julian and Ricky don’t want to have anything to do with each other, leaving Bubbles in the middle to try and bring the two fools together.

In the end, through misadventures with the cotemptuous and misguided Jim Lahey (John Dunsworth), the trio do end up together, and get in to the kind of trouble that only seems possible for guys who smuggle pee and sell dope out of their jackets. The trip also offers a funny glimpse of real heart as Bubbles connects with his long, lost parents, who passed away and left him a run-down home filled with childhood memories.

If you’re like me, and you have never watched Trailer Park Boys before, I think it’s fairly easy to jump into this film without knowing anything else about them. There’s a history there that can be explored in the series, or in the other films, but the basic premise is simple: trailer trash get up to no good.

The cast is generally fantastic at what they do, all the way from Tremblay down to Torrens and the smaller supporting roles, but the trouble with Trailer Park Boys lies with the script, which is simply not very funny. There are jokes, but most of them fall flat, and the antics that are probably meant for bigger laughs are just dumb. I’m not even sure they’re dumb in the high-school sort of way that would be funny for teenagers and the Buttheads of the world. I probably laughed more at the beginning, with the car that can only drive in reverse, than at anything else in the film, and we’re talking about a movie where guys are smuggling pee across three provinces.

Director Mike Clattenburg knows these characters well, and for all their stupidity, he presents them perfectly, but well-presented characters are not necessarily funny. The story is also sparse, and in a film that isn’t very funny, that’s not a great setup for big adventure.

Hardcore Sunnyvale fans may jump all over this film for no other reason than because it exists, but it’s hardly worth the price of a ticket. Save this one for when it inevitably arrives on television, or on Netflix.

For me, I’m glad I took the trip to this strange, backwater place, and that I spoke to the show’s stars (who did the interview in-character), but I may need to go back a few seasons for the good stuff, because this feels like the characters are just getting old and tired.