Full disclosure–I am a huge fan of the disaster epic genre and always have been, so when I saw early trailer footage for San Andreas I was a bit excited but it looked like the real deal. And it is.

Like all good disaster films San Andreas has a very simple premise–the hundred year overdue massive earthquake along California’s San Andreas fault hits and one man, an LA Fire and Rescue helicopter pilot (Dwayne Johnson) and eventually his ex-wife (Carla Gugino) head deep into the worst of the disaster to save their daughter (the stunning Alexandra Daddario).

A disaster epic of this nature is helped by story and characters you want to care about but ultimately a good disaster film works or doesn’t work based on the execution of the effects and how those effects are arranged within the running time of the film. San Andreas clunks a bit here and there but all in all this is a very good entry in the genre.

From as far back as 1937 when John Ford directed the disaster epic through my favourite period of the genre–72, 73, 74, when three of my all time favourites were made: The Poseidon Adventure with Gene Hackman; The Towering Inferno with Steve McQueen and Paul Newman; and Earthquake, which San Andreas is practically a remake of, with Charlton Heston–disaster films have been made seemingly to take advantage of advances in technology. In 1974 Earthquake employed something called Sensurround–which was more or less huge bass speakers that shook theatre seats during the earthquake scenes–in San Andreas we see 3-D being used to great effect as these earthquakes take apart every building, bridge and damn from Nevada to San Francisco. 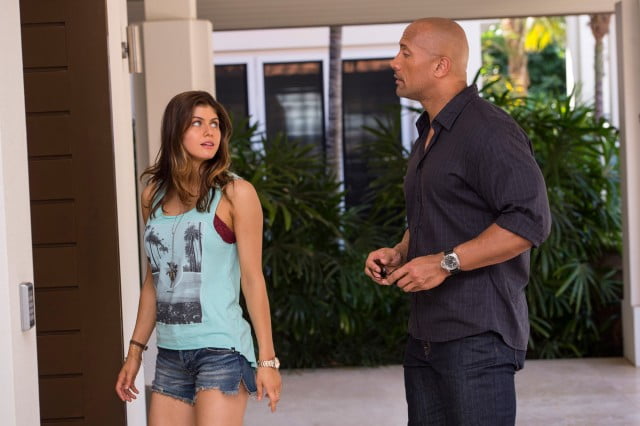 Gander, Newfoundland born director Brad Peyton does a great job on this huge movie, especially given the fact that kids movies were his métier before this. Let’s face it, a movie like this is pretty much in the hands of the computer CGI guys but Peyton is ultimately responsible for shaping the action and the performances and in that regard he has done a good job. He also has directed Dwayne Johnson before and manages to get a pretty good performance out of the old Rock once again.

I am not the biggest fan of Dwayne Johnson’s but he is good in this movie even in his couple of emotional scenes–my problem with him is that he is too damn big! Any time Johnson is in a scene with another normal mortal he looks like a cartoon figure, like an over-pumped gorilla. His enormous size is a distraction. But that said, in this movie he is able to protect a kind of vulnerability that adds to the overall impact of the film. 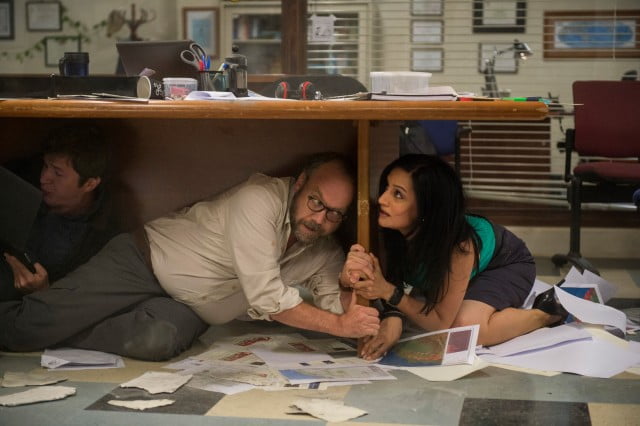 Other performances are also disaster movie solid–especially British actor Hugo Jonstone-Burt as a secondary hero, and the love interest of Alexandra Daddario’s Blake. Daddario is an exquisite creature to look at and a good actor–she is perfectly cast in this movie. Paul Giamatti–if there is a more versatile character actor there I certainly cannot name him or her–he too is perfectly cast as the seismologist who sounds the initial warning and then is around to passionately explain the science of it all throughout.

There are always complaints about movies like this, that the dialogue is cheesy (of course it is, it is supposed to be–were this stuff to be realistically portrayed everyone would be stumbling around in catatonic shock or screaming in the face of such disaster) and that the endings are always predictable (again, of course they are, this is a disaster movie, if things didn’t end on an up beat note there would be no reason to sit through them past about he 20 minute point). People who make such complaints shouldn’t go to movies like San Andreas in the first place.

I attended the advance screening of San Andreas with my actor friend Josh Stone and he pointed out to me as we were exiting the theatre that several audience members were wiping tears from their eyes. That is a very good sign for this movie–it means that audiences members are drawn in and drawn over the awkward dialogue and the predictability of the various outcomes of the big sequences.

San Andreas is one of this year’s terrific summer movies; you get your popcorn, settle it, strap on the glasses, and go for a two hour thrill ride.