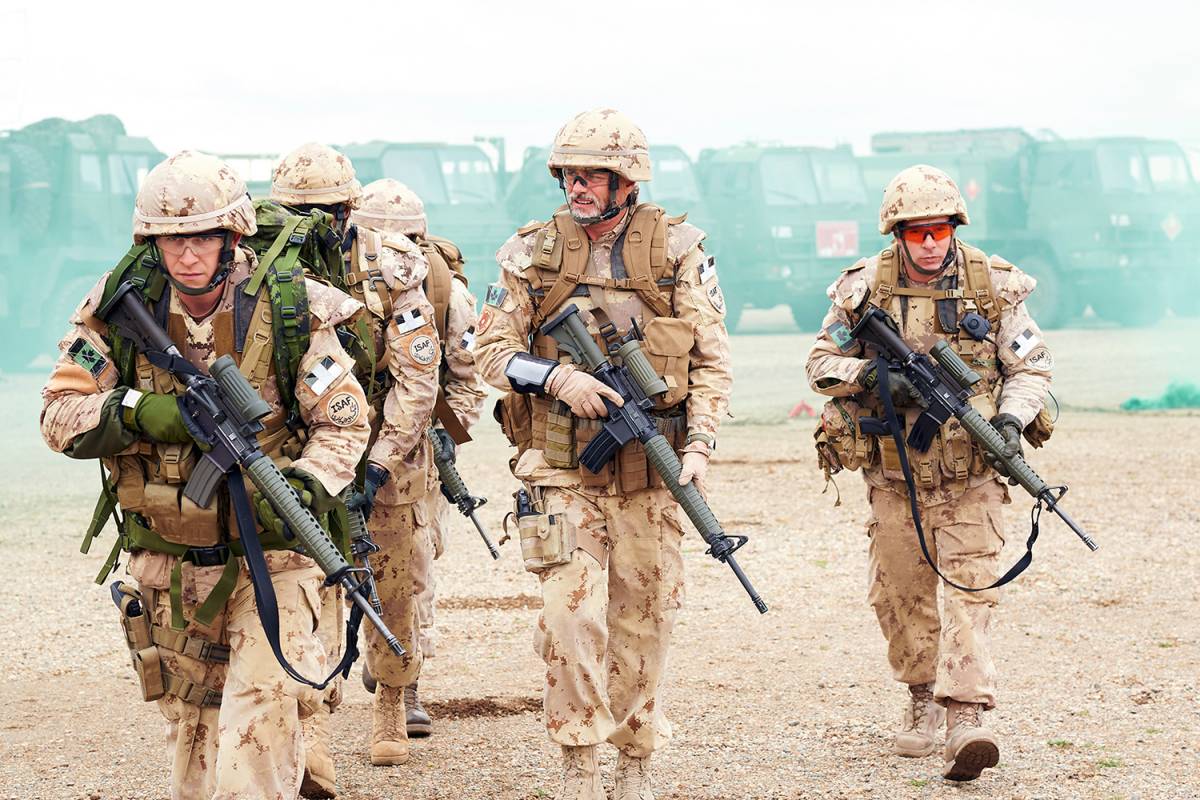 For Canadian actor, writer, director, and producer Paul Gross, the term “daunting task” doesn’t seem to exist anywhere in his common lexicon. Previous to this hugely-scaled film on the Canadian campaign in the Afghanistan war, Hyena Road, he tackled Canada’s role in The Great War in Passchendaele, so when the opportunity presented itself to hang out with Paul Gross for a morning’s worth of Hyena Road conversation, I had to find out what his definition of a daunting task meant.

Since getting a film off the ground these days is tough, no matter who you are, I was curious to know–especially after the Herculean task of getting his last film, Passchendaele, made–if the idea of making a huge war film set in Afghanistan was something that caused him even a moment of hesitation before deciding to go down that road.

“I had gone back to Afghanistan with a camera to shoot some stuff on my own and speak to as many service people as I could, after an initial trip to the war zone to visit our service people there, and when I got back and started organizing the notes it struck me that there was a movie there,” said Gross. “I called Niv [Fischman, his producing partner] and told him what I thought and I just heard a protracted moan on the other end.”

I was interested in whether that first trip to the Afghan war zone lit the imagination fuse in him that made making Hyena Road an inevitability.

“It was certainly not my intention on that first trip to research or plan anything like this,” said Paul Gross. “But when I got there and it all hit me and I was trying to take it all in I realized how little I knew about what was going on there, what our fellow citizens were doing and going through there. Everything I discovered made me want to know more.”

The Hyena Road screenplay, written by Gross, which he states is pretty much all based on service people he met and their actual stories, required an attention to detail that was crucial to the overall authenticity of the movie and the message, perhaps more so than on anything he has ever written before.

“Service people have a language all of their own,” said Gross. “For expediency or simplicity they speak in acronyms and abbreviations and they invent words or use words in ways I wouldn’t like the word ‘engagement’–they use that word to mean something much different that I know the word to mean. So for authenticity’s sake I ran everything by a military advisor before I considered the script complete.”

He went on to tell me about getting bored with writing the actual grid coordinates of the areas he was dealing with over and over so he started to invent grid coordinates, “then the advisor had a look and noticed the discrepancy immediately and informed me that my dialogue was sending the guys somewhere in the South Pacific!” In the end, when talking about the screenplay, Paul Gross said, “it almost feels like I didn’t really write it at all. I mean the story and the characters, it was like it all just came together and grew out of what I had seen and heard from the service people I met and hung out with there.”

Making Hyena Road was also a physical feat that just added to the already stressfully omnipresent nature of the difficulties in trying to finance a Canadian movie. When you see the movie it seems as if you are watching a film that took six months to shoot with a budget in the fifty to sixty million dollar range, but that is not the case.

“We had to shoot the entire movie in thirty days,” said Paul Gross. Which, when you see the movie, seems astounding given the size and scope of look of the movie that included tons of military gear, many actors and extras and lots of pyrotechnics, as well as location-shooting in places like Wadi Rum in Jordan and CFB Shilo in Manitoba, “and there were a few occasions when the money was so tight I thought it would cause the whole thing to collapse.”

The budget was in the vicinity of $12.5 million which is sizeable for a Canadian movie but a fraction of what it looks like it costs. “I think a lot of that can be put down to the stuff I had shot on the earlier trip to Afghanistan involving helicopters and heavy equipment rolling,” said Paul Gross. “And the Canadian military was very cooperative. We couldn’t have made this movie the way it needed to be made without their help.”

Having been to Afghanistan himself and having gone on patrols with the troops gave Gross the advantage of knowing exactly what the place not only looked like, but felt like. “Being there, even at the base, was like nothing I had ever felt before, everything was heightened and intense,” said Paul Gross. “Even though I wasn’t there all that long when I came back here and was in a meeting about a TV show, I almost lost it. The banality of the conversation was all of a sudden just impossible for me to take. Which made me really feel for what our service people must face when they get back to life here after a deployment.”

When it came to casting, Paul Gross was equally careful to get just the right people in the right roles, including himself. Having been to the war zone gave Gross a real sense of what he needed his characters to look and sound like.

“I knew I was going to be in the movie, certain aspects of the financing were contingent upon that, but there were roles that I knew I couldn’t play effectively,” said Paul Gross. “When I met Rossif [Sutherland], I saw not just a very good actor but he he had this look about him, like a tough guy but a tough guy with the soul of a poet and that was just what the role of the sniper Ryan needed.”

To his credit, Gross wrote in a couple strong female characters and put them in crucial roles alongside their male servicemen counterparts–roles nicely played by Christine Horne and Nikki Duvall. I asked Gross if these women were based on real people he had met in Afghanistan; “Not really to the extent that the males characters are based on real people,” said Gross. “I wanted these female characters to be closer to the action of the story than women are placed. No woman has held as high a position as Jenn in the movie [Christine Thorne], but a few are close and it is coming. I was also interested in having a mix of men and women service people in the thick of the action to illustrate what modern warfare looks like.”

I wondered aloud if ultimately the movie ended up being the movie Gross envisioned it would be back when he was putting together his screenplay after a few reconnaissance trips to Afghanistan. “You know, it is,” said Gross. “In some ways it exceeds what my hopes for the movie were, especially in terms of how veterans are responding to it. After a screening for veterans held in Kingston a number of them came up to me to thanked me for giving them something they could direct family and friends to show them what they went through over there, with the hope that it would help them understand the whole thing. Hearing that was wonderful and certainly made me feel that we had done this right.”

As our long conversation in a west-end Toronto Cafe ended I could see that filmmaker, as trim and fit as he is, was getting worn out. Ever since Hyena Road debuted at TIFF he and members of his cast have been criss-crossing the country promoting it, but I could also tell that to Gross it was all worth it.

Hyena Road is a solid movie in every way and much of the credit for that is due to Gross who served as writer, director, producer, and plays the crucial role of intelligence officer Peter Mitchell in the film. Other terrific cast members delivering memorable performances include the aforementioned Rossif Sutherland playing a conflicted sniper, Republic of Doyle‘s Alan Hawco, and Clark Johnson.

The story is told earnestly and intelligently without sacrificing the action that those seeking an exciting war movie will look for. We are most fortunate to have a guy like Paul Gross representing the Canadian film industry–he has the passion, the talent and the stamina to tell Canadian stories on screen and not just tell Canadian stories but tell them in a way that is not usually the norm for Canadian films, he tells them much, much bigger.