A terse family drama that increasingly gives way to a more intense psychological thriller, Edge of Winter, the debut feature from filmmaker Rob Connolly, takes a simple approach to a simple idea and results in a simple, but well mounted film. Shot in the snowy woodlands in and around Sudbury, Ontario, it’s a chilly looking film with shivering undercurrents of malaise and maliciousness that start to take hold around the halfway point. Connolly and co-writer Kyle Mann deliver exactly the kind of film one would expect from the premise, but there’s nothing wrong with someone getting an easy premise right on the first crack.

Rising stars Joel Kinnaman (currently on screens in the DC Comics adaptation Suicide Squad) and Tom Holland (the new Spider-man in the Marvel Comics cinematic universe) play an estranged father and son due to spend a weekend together. Holland’s Bradley and his younger brother Caleb (Percy Hynes White) are dropped off by their mother (Rachel Lefevre) and stepdad (Shaun Benson) to spend some time with their down-on-his-luck father, Elliot (Kinnaman), for a weekend visitation. Bradley isn’t too thrilled to go along on the trip, having entered his sullen teenager phase, but twelve-year-old Caleb seems a lot more understanding and accommodating.

While out on an adventure in the wilderness to show the boys how to fire a rifle, an effort to show Bradley how to drive causes their truck to crash, and the family is stranded thirty miles from any sort of civilization. After spending a night in their car to avoid freezing to death – where the kids break it to their father that mom plans on moving the family to England because of her new husband’s promotion, which Elliot does NOT take well – they make their way to a secluded cabin in the woods where they’re further stranded by a massive snowstorm. Essentially trapped in the cabin, Bradley and Caleb finally start to see the depths of their father’s growing desperation to keep the family together.

Connolly has picked a perfect choice of subject for a debut feature, as it’s one that relies heavily on actors and settings, and less so on grand set pieces or intricate plotting. A wrinkle arises when a pair of Quebecois hunters (Shiloh Fernandez and Rossif Sutherland) happens upon the cabin the family holes up in, but really these new characters are yet another means of escalation. Connolly never loses sight of the family dynamic, placing the focus squarely on Kinnaman, Holland, and White at all times. 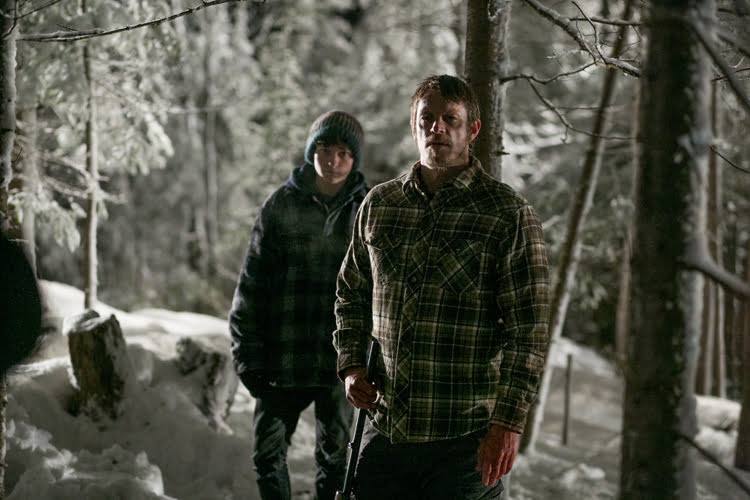 In what might be his best cinematic performance to date, Kinnaman wonderfully conveys sadness, rage, and desperation. Outside of moments where Elliot’s frustration peaks, Kinnaman allows the character to simmer in his own pain. It’s not clear at first if Elliot wants his sons to get to safety or if he’s snapped and is trying to keep them closed off from the outside world. Connolly’s fast pacing of a slowly unravelling plot allows for Kinnaman’s performance to come across with the proper immediacy.

Holland and White have a great chemistry together as the brothers, and they play well off Kinnaman’s increasingly erratic behaviour. While the film never goes over the top dramatically or in terms of mounting suspense, Connolly’s work does match the unease displayed by Holland and White’s characters.

It’s kind of a shame that the rest of the film around these great performances and sense of place couldn’t be more surprising. It’s a straightforward three act film where every plot development can be seen coming from a ways off. Everything one expects to happen occurs in almost the exact order one would expect it to. Edge of Winter is the kind of film you could set a watch to, but it keeps time well.

Watch the trailer for Edge of Winter: