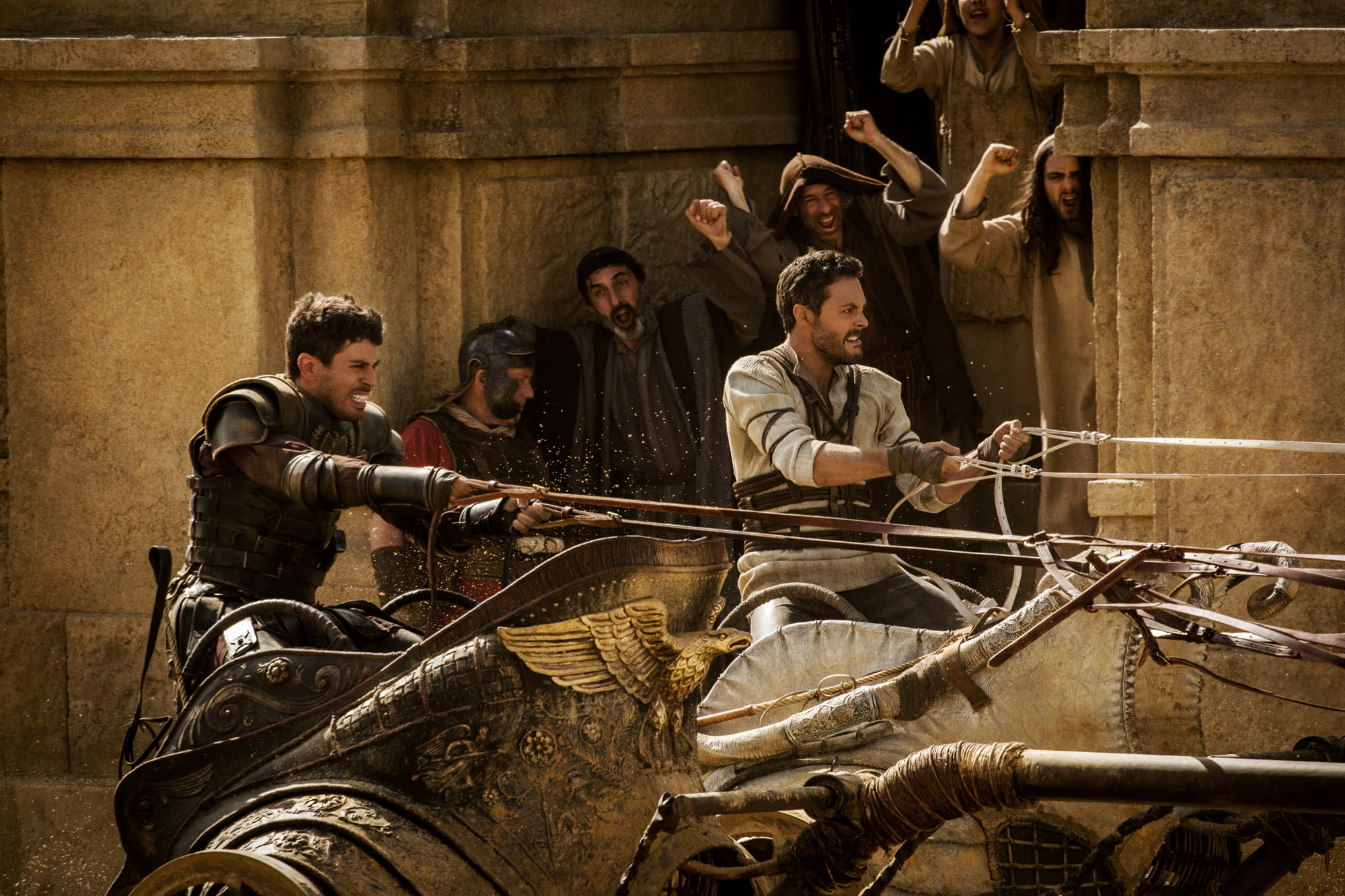 No one asked for a reboot of Ben-Hur, one of the greatest cinematic and religious epics ever made, so I suppose the best that can be said about a loose remake helmed by the director of Abraham Lincoln: Vampire Hunter is that it isn’t consistently awful. I’m sure there are plenty of people waiting for me to trash this one, and make no mistake when I say it’s still rather worthless, but there are a few praiseworthy elements here.

Once again drawing on Lew Wallace’s 1880 novel depicting events happening during the age of the crucifixion, it’s the story of a Jewish prince of Jerusalem – Judah Ben-Hur, played by Jack Huston – and his strained relationship to his adopted Roman brother and best friend, Messala, played by Toby Kebbell. Once as close as brothers could be, they drift apart when Messala goes off to join the conquering Roman armies. Years later, Messala returns to Jerusalem as a hero to Rome and a villain to the Jews he once called friends. Messala asks Judah for a favour, hoping the well liked prince can stop the people of Jerusalem from rioting long enough to allow for Pontius Pilate (a gleefully evil Pilou Asbæk, stealing many scenes) to pass through safely. When a young man Judah and his sister were helping to nurse back to health in secret tries to assassinate Pilate, the prince attempts to take the blame in exchange for leniency against his family. He doesn’t get said leniency from his former friend – now forced into giving Rome the blood they so richly desire for such a trespass – and is sold into slavery.

William Wyler’s 1959 adaptation of Ben-Hur had three and a half hours to work with, while Bekmambetov (Wanted, Nightwatch) has just a shade over two, meaning a fair amount of cuts have to be made for time consideration. Immediately, the richness of the best film or television adaptations of the story will be lost, but on paper and in theory it’s not an insurmountable task. Unfortunately, Oscar winning screenwriter John Ridley (12 Years a Slave) and co-writer Keith Clarke (The Way Back) can’t quite figure out what should be cut and what should stay. It’s wholly unfair to compare any remake, reboot, or reimagining to an original because there’s no such thing as creating the exact same film twice (no matter what Gus Van Sant tries to say), and no matter what’s being remounted, there will always be someone in the audience for whom this story is new and fresh. Not everyone has seen everything. The easiest way to tell that Bekmambetov’s Ben-Hur is failing is that even if you were to take the novel and Wyler’s film out of the equation, there would still be an undeniable sense that something is missing here. It’s not a bad story, but bad storytelling.

For Ben-Hur to work as a story the betrayal of Judah by his closest confidant has to be set up to a gut wrenching degree. In this version Morgan Freeman’s character (a saviour of sorts who doesn’t actually materialize until over halfway into the film) narrates the first fifteen minutes of the film to try to patch over all the bits they don’t have time to show. It shortchanges everything that follows. Messala’s arrest of his friend and the condemnation of Judah’s mother and sister to terrible fates both seem mildly inconvenient instead of devastating. From the opening that foreshadows the expected climactic chariot race, the audience already knows that Judah will have his revenge, but all we know of the relationship between these brothers is that they’re chummy and that’s about it.

It should also go without saying that Bekmambetov isn’t up to the challenge of creating a slow burning, character driven epic. He seems bored and antsy with any sequence of dialogue or character progression, and all such scenes are captured with a useless shaky-cam aesthetic (which is awful to behold in 3D) with the conviction of a sugar addled six year old stomping around and wondering when his or her parents are going to get to the fireworks factory. There aren’t too many sequences requiring said fireworks here, so the majority of the film finds Bekmambetov barely masking his contempt for the material by making sure every shot in the film’s quieter moments has enough smoke pumped into the frame to make the viewer think they might be developing glaucoma.

To underline how little Bekmambetov despises anything coming close to character development, in one scene where Judah and Messala are trying to have a serious conversation, the sound mix is so muddy and cluttered that it sounds like there’s a reverb effect. In another moment when Judah has a conversation with his useless, often weeping love interest (Nazanin Boniadi), her dialogue has been dubbed with ADR that’s wholly unconvincing. Why? Because the actress’ lips never move. If someone isn’t shouting, getting stabbed, blowing up, getting run over by a chariot, or falling off a boat, Bekmambetov can’t be bothered to care. 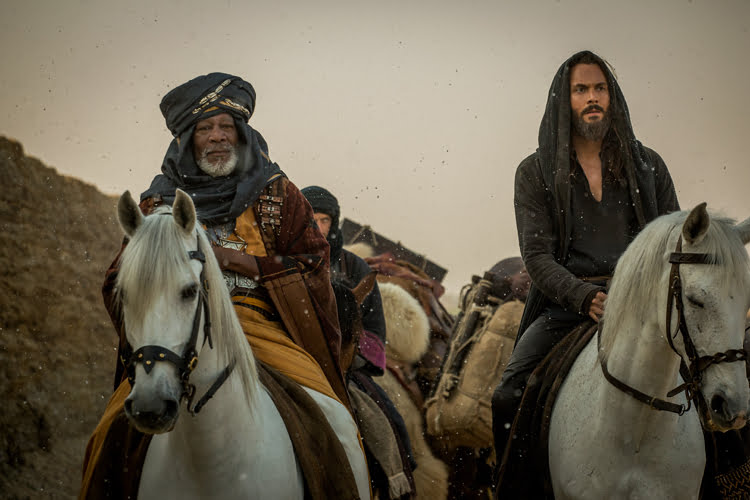 But the film’s random sense of cutting (including some truly horrid, jarring edits, sometimes in the middle of lines of dialogue) also damages Bekmambetov’s love for enormous action set pieces. Entire battle sequences are played out disappointingly as montages, and even the admittedly well done chariot race showdown between the vengeful friend and his betrayer misses a key shot that would explain exactly how the race ends the way it does. It’s at times bafflingly incoherent, but then again, that’s literally every film Bekmambetov has made to date.

And in an obvious, desperate bid to appeal to a Christian audience to hopefully recoup the film’s massive budget, there are scenes sprinkled throughout (especially at the end) involving Rodrigo Santoro as Jesus that feel like they weren’t a part of the original script. These scenes are shoehorned into the film somewhat callously and disingenuously, but if it gets Mark Burnett and Roma Downey (two of the biggest names in Christian cinema and television) to put their seal of approval on this as executive producers, then so be it, I guess. Then again, Judah does straight up murder several people who pissed him off here, so I guess that kind of makes him a terrible Christian, anyway.

So in a film where this much is wrong, what good could there be lurking within it? The answer is Jack Huston and Toby Kebbel, but especially the former. They’re both too good for this movie, and through their generous and committed performances they provide the audience investment the rest of this soulless exercise lacks. Huston expertly conveys Judah’s warmth and vengeful rage to a point where the viewer wants him to succeed, but not do anything the character will regret. Kebbel, probably because of how the script has been written, plays Messala like one would portray a wounded teenager. In many ways, it’s remarkably close to what Kebble tried to do in last year’s ill fated Fantastic Four reboot as Victor Von Doom, but with admittedly better results and slightly better material this time out.

And, of course, the chariot race is pretty cool. Ditto the naval battle at sea where Judah is able to free himself from indentured servitude. Shockingly, the chemistry between Huston and Kebble makes the film go further than it would have otherwise. They’re the only things stopping this from being an inert waste of time and effort produced by a lot of people who should have known better than to try and attempt a remake of Ben-Hur. It works in fits and starts, but such small graces don’t make a great film if that’s all it has going for it. It’s a useless and somehow a fitting end to a summer movie season full of useless letdowns.

Ben-Hur opens at theatres across North America on Friday, August 19, 2016.

Check out the trailer for Ben-Hur: