A lot of people probably won’t like The Light Between Oceans, and I can see why that would be. There’s nothing politically incorrect, offensive, or button pushing about it, but more of a film where people might question why it was ever made in the first place. The latest film from writer-director Derek Cianfrance (Blue Valentine, The Place Beyond the Pines) hearkens back to the kind of awards bait prestige projects of the 1970s and 80s. It’s a restrained, stately looking effort full of simmering, restrained, tastefully delivered melodramatic emotions. It’s the kind of film that once had its time and place, but the filmmaking landscape has moved on from to a great degree. Really only British auteur Terence Davies continues to make this kind of picture (and sometimes Ken Loach), but to see an American take a crack at it feels at least somewhat novel and refreshing.

Based on the bestselling tearjerking 2012 debut novel of the same name from Australian novelist M.L. Stedman, The Light Between Oceans takes place in post-World War I Australia where returning war hero Tom Sherbourne (Michael Fassbender) has requested a solitary naval position in an effort to get his bearings back. He initially signs up for a temporary six month contract as the solo worker at a lighthouse on a secluded island, but that gets extended to several years following the previous worker and his family going a bit mad from living there.

In the town closest to the island he meets the charming and beautiful Isabel Graysmark (Alicia Vikander), a young woman from a family that lost their two sons to the war. They fall in love, get married, move back to his island posting, and attempt to start a family. After a pair of miscarriages, Isabel begins to feel hopeless about their chances of conceiving a child. One day, Tom spots an errant dinghy off the rocky shoreline, and upon pulling it in to shore he finds a dead man and a living baby girl. The still grief stricken Isabel takes this as an offering or sign of some sort, and begs the usually straight-laced Tom to cover up their discovery and claim the baby as their own. They pull off the ruse for quite some time, but Tom’s guilt begins to get the better of him when he has a chance run in with Hannah Roennfeldt (Rachel Weisz), daughter of the richest man in town (Bryan Brown) and mother to the baby the lighthouse couple has taken in.

Much like he did with his generational crime drama The Place Beyond the Pines, Cianfrance’s take on The Light Between Oceans places emphasis on feelings of grief, sadness, and regret, and he’s not in any particular rush to offer up easy to see epiphanies and solutions. Cianfrance has proven adept over his last two films at drawing the demons of his characters to the surface and watches as they wrestle with them in painstaking detail. This time, however, the filmmaker doesn’t have anything particularly flashy or salacious to fall back on outside of lensing the gorgeous countryside and raging ocean.

There’s a certain degree of predictability to the decisions made by Tom and Isabel, but the characters don’t see it that way. They struggle with the morality of their choices – especially Tom – and try to insulate themselves from pain and darkness. We know what Tom and Isabel have done is wrong, and yet Cianfrance takes plenty of time to establish the characters and get them to a point where the viewer feels sympathetic towards them and can understand why they would essentially resort to kidnapping. It’s a moral twist built into the fabric of the story that takes a lot of effort to look credible, and Cianfrance does so by patiently waiting for every aspect of the story to fall into its right place. And when Weisz finally shows up in the film around the halfway mark, Cianfrance takes just as much time to explain her point of view and the trials and tribulations she had to endure both before and after losing her child. It’s a film about generally good hearted people who wrestle with the weight of responsibility and the consequences of their actions at all times. It couldn’t be more genuine if the characters literally had hearts stitched onto their sleeves. 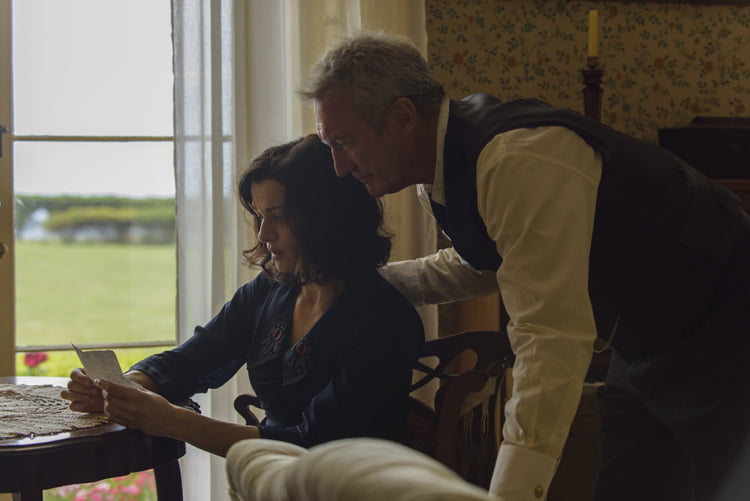 Cianfrance clearly cares about all the characters involved and shows no judgment towards them or their actions, which I think most viewers will find admirable, but he has also crafted the kind of stately, almost rapturous looking melodrama that can make casual filmgoers antsy. The Light Between Oceans allows for Fassbender and Vikander to show a remarkable amount of chemistry together despite their characters being different people on emotional levels, but when they crack and break down they never reach the point of hysterics. Most of the tears shed here are of the “single droplet floating down a cheek” variety, which some might find cheesy, but I think it fits the consistent tone of what Cianfrance attempts to accomplish here. The somewhat stifled approach works well in scenes involving Tom and Isabel’s already insular, but loving relationship, but less so when Tom’s conscious starts getting the better of him and he starts seeking amends with Weisz’s understandably pissed off and confused widow.

In terms of visual style, The Light Between Oceans cribs liberally from the two Terences – Davies and Malick – for something that could easily be derided as derivative, but again I think it works for the tone Cianfrance wants to establish. There are plenty of longing gazes at the star covered Australian night sky, no less than half a dozen magic hour shots containing well placed lens flares, wide angle shots that literally let the viewer see the forest for the trees. It’s exactly how one would expect this sort of epic filmmaking to look, all set to Alexandre Desplat’s piano and string heavy musical score. Considering that Cianfrance hasn’t attempted a film on this large of a scale before, I’m willing to forgive his falling back on established tropes. He clearly decided he wanted a film that looked gorgeous and felt the way he thought it should feel, and since he’s a writer and director who often places emotion over theatricality, he made a choice that fits into his wheelhouse perfectly.

Such decisions make The Light Between Oceans a bit too earnest and on the nose for its own good, but that earnestness kept me invested. While so many other up and coming filmmakers with a few critical successes under their belt might have attempted an ironic take on the material, I appreciate that Cianfrance tries to remain genuine throughout. It’s a film that gives every actor involved something of substance to do, every craftsperson something worthwhile to tackle, and viewers ample amounts of time to formulate nuanced opinions of the characters.

If The Light Between Oceans had been made in 1985, pundits would have told readers to stop the Oscar race and anoint it as the next coming of American cinema. Almost thirty years later, the same kind of film will sadly be looked down upon as an afterthought. It’s a cynical thought, but we also live in cynical times. I doubt it will play well with audiences or many fellow critics, but I at least appreciate the dedication to craft shown here by Cianfrance.

The Light Between Oceans opens in theatres across North America on Friday, September 2, 2016.

Check out the trailer for The Light Between Oceans: