Structured like a quixotic quest borne from misguided honour and principal, Kicks, the debut feature from filmmaker Justin Tipping, reinvents the inner city drama for a new generation. There hasn’t been a film as fresh, original, and layered about life in the ‘hood since John Singleton dropped Baby Boy in 2001. It’s not a perfect film, sometimes relying too heavily on a foreboding,  poetic style that doesn’t always stick over actual substance, but there’s still some major cause for celebration here.

Tipping and co-writer Joshua Beirne-Golden cast up-and-coming talent Jahking Guillory as Brandon, a shy teenager from Richmond, California. Girls don’t really notice him. His best friends – Albert (Christopher Jordan Wallace, son of Faith Evans and the late Notorious B.I.G.) and Rico (Christopher Meyer) – seem to only hang around Brendan just so they can feel a little better about themselves. His mother is never around. His family doesn’t have a lot of money, and he’s constantly teased because he’s had the same pair of ratty sneakers since junior high.

Looking good is a status symbol in the inner city, but it can also make someone perceived as weak into a target. Brandon saves and hustles all he can to buy a fresh pair of Air Jordans (authorized replicas based on the original black and red Nike’s that cemented the cultural iconography of the brand) from a shady dude out of the back of a van. Almost immediately, Brandon is looked at differently, gaining slightly more respect from his friends and treating the kicks as if they were his babies. He doesn’t even have them for a day, however, before he’s jumped, beaten, and robbed of the shoes on his way home by six dudes, led by the psychotic Flaco (a truly terrifying Kofi Siriboe), a highly feared thug from nearby Oakland. Having received a taste of respect, Brandon uneasily coaxes Albert and Rico into following him to the other side of the bay area to get his kicks back by any means necessary.

Kicks works on a number of levels. Primarily, it’s an indictment of how toxic masculinity can be compounded by socio-economic barriers to a point where being hard headed and fighting for things based solely on principal can have dire, life changing consequences. We know Brandon is a good kid despite his propensity for going down a path where he’ll have to do terrible things and put his friends’ lives in jeopardy all for a pair of shoes. He’s been down for so long that he’ll do anything to avoid getting bumped back down to the bottom, especially at the hands of an outsider and no matter how dangerous Flaco continually proves to be.

One could easily call Kicks a coming of age story, and in some respects that wouldn’t be wrong, but it’s more of a snapshot of daily life. Tipping makes it know that this is a major period and a defining moment in Brandon’s life, but it won’t be the only thing to define this young man. It’s more of a film where Brandon has to fight through the clutter of contradictions, warring ideologies, and too many wayward moral compasses all pointing in different directions. In short, it’s a coming of age story insomuch as it’s about a young man learning how frustrating it can be to be an adult, crooked or otherwise. 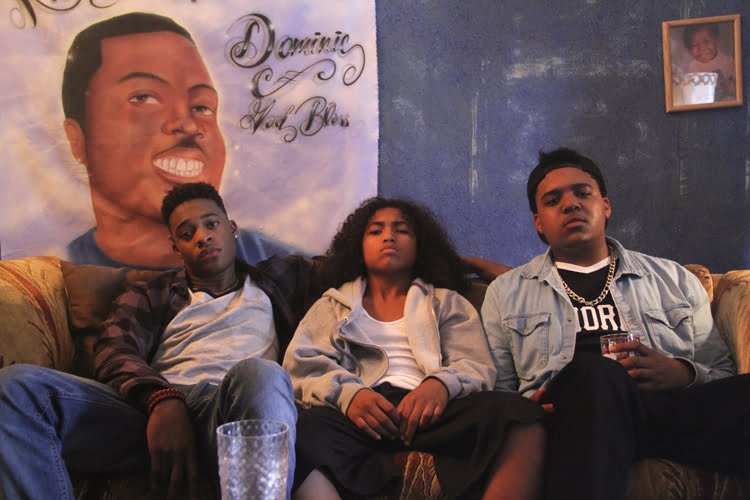 Tipping also takes some subtle, but pointed shots at internet culture throughout. Every time there’s a tragedy or someone gets beat down, a bunch of wannabe tough guys pull out their cell phones and start acting like hosts of their own television shows. No one mentions World Star, but the implication here that wilding out over someone getting knocked out isn’t honourable even by the code of the streets, yet it has become an unstoppable and troubling phenomenon that only perpetuates hood stereotypes and rotten behaviour. It might be an easy point to make, but Tipping handles it well here.

These warring definitions of manhood, which the film believes can’t be defined, comes across brilliantly via the chemistry of the three talented leads. Much like the people they’re placed in opposition to, Brandon, Rico, and Albert are very different in how they view the world and how the situation regarding the shoe theft should be handled. The main difference is that despite their differences and their propensity to mock one another, deep down they all accept each other for who they are. They never want to see Brandon get in too deep, but if he’s in trouble, Albert and Rico want to be there to help their buddy out. They’ll rightfully complain about Brandon’s behaviour (especially in the film’s final third when things actually start to get deadly), but they won’t back down from a difficult situation within reason.

It’s all quite accomplished in scope, ambition, and storytelling technique, but there are a few moments where Tipping can’t help but offer up some really obvious visual metaphors (like putting a gun on a bed next to a baby, an effective, but groan inducing way to underline the film’s messages) to go alongside the film’s more subtle, interesting choices (like how Brandon always daydreams of being an astronaut floating in space in perfect solitude). He also sometimes seems a bit too enamoured with making Kicks feel like a music video, packed with slow motion, quick edits, and ambitiously long camera takes from gorgeous looking angles. It’s almost too slick in terms of production design to seem as grimy as it needs to feel, but Tipping certainly isn’t hiding that he knows his stuff. Much like the new Jordans that drive the plot, Tipping wants to show off his stuff, and a lot of what he has in the trunk is pretty great.

Check out the trailer for Kicks: