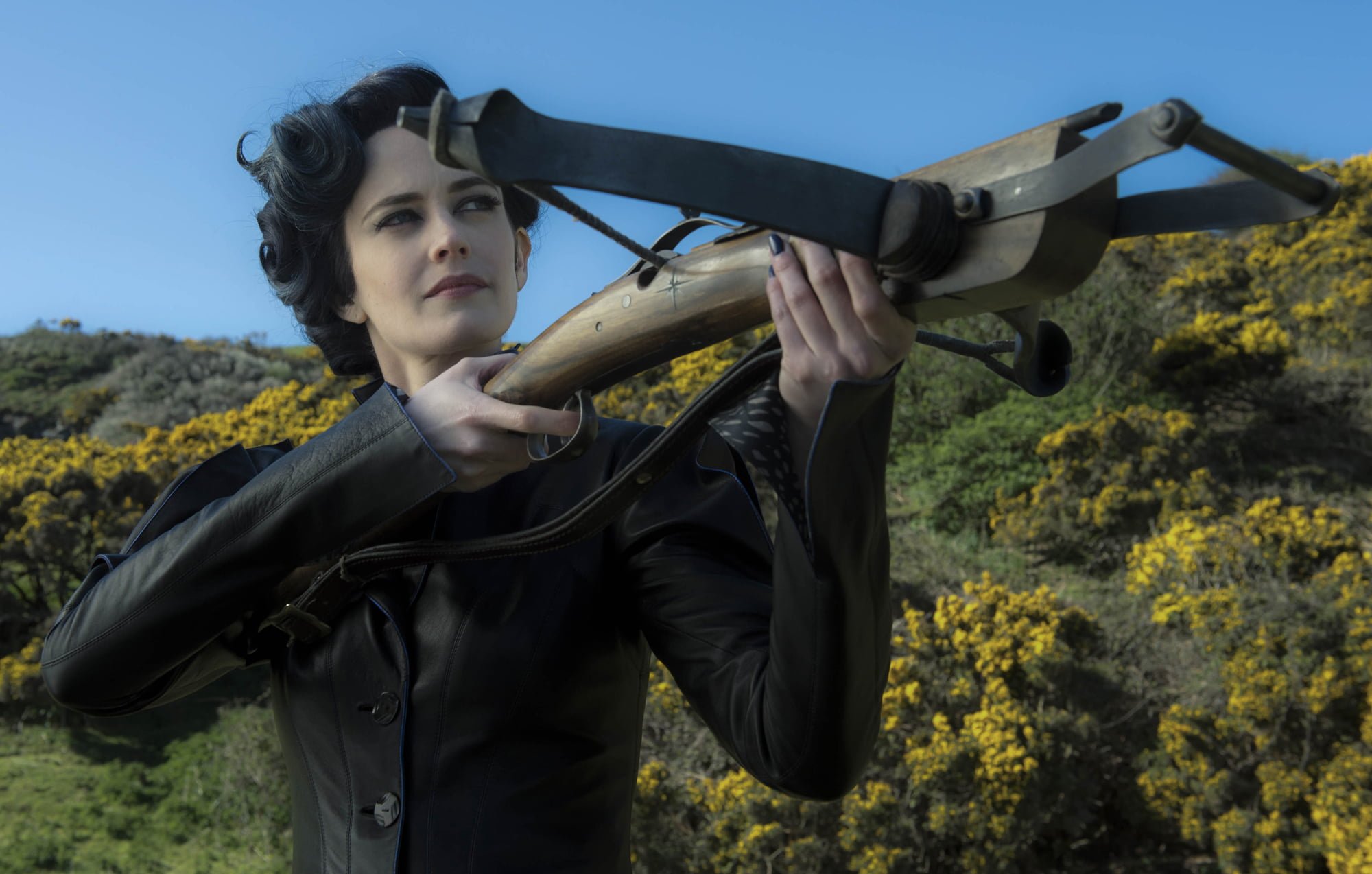 The elements of a great film – and perhaps the next great cinematic franchise to be spawned from a young adult novel – are initially on display in director Tim Burton and screenwriter Jane Goldman’s adaptation of Ransom Riggs’ Miss Peregrine’s Home for Peculiar Children before the picture more or less collapses on itself. There’s some fun mythmaking and world building going on here for viewers of all ages, but once Burton and Goldman are tasked with turning Riggs’ material into a blockbuster for mainstream teens and kiddos, things start to go off the rails.

Awkward, shy teen Jake Portman (Asa Butterfield) has his world rocked when his beloved grandfather (Terence Stamp) passes away. Before dying, the long thought senile and crazy gramps mumbles some nonsense to Jake about travelling to a remote island of the coast of Wales to find a time loop that would send him back to September 3, 1943. It’s all tied to fantastical tales Jake’s grandfather used to tell him as a youngster about a school for gifted, peculiar children with special abilities. Jake’s doubting, lazy photographer father (Chris O’Dowd, fighting valiantly to maintain an American accent) begrudgingly agrees with his son’s shrink (Allison Janney) that a trip to such an iconic location from grandpa’s childhood could bring the young man some much needed closure.

Of course, once Jake gets there it turns out that gramps wasn’t only telling the truth (there wouldn’t be a story if he’d been nuts), but that the old man was once an integral part to the survival of Miss Peregrine’s compound and the children within it. Jake travels back to the forties by way of a magical cave to meet Miss Alma Peregrine (Eva Green), a matronly figure and teacher to kids with unusual gifts and freakish physical abnormalities. Her main talents are the ability to turn into a bird and create time loops that are able to reset September 3, 1943 back to the start – the day the de facto orphanage was nearly destroyed by a German bombing raid over the island during World War II.

While there he meets a lot of assorted “gifted types,” and it’s clear why frequent X-Men scribe Goldman was contacted to work on this adaptation. It’s sort of like a 1940s version of Charles Xavier’s School for Gifted Youngsters combined with a healthy dash of Hogwarts. While not a ton is known of the circumstances that brought each of the children to the school (something the X-Men films similarly suffer from), Goldman still shows a kind heart towards those society shuns, making her worldview and that of Burton’s nicely aligned here.

Jake starts palling around with Emma (Ella Purnell), a girl with the ability to control air who’s so lightweight she needs lead shoes. Their flirtation annoys the jealous Enoch (Finlay MacMillan), who possess the ability to make anything living, dead, or inanimate into a mind controlled puppet. There’s Olive (Lauren McCrostie), a firestarter; Bronwyn (Pixie Davies), a super-strong tyke; Hugh (Milo Parker), who can shoot bees from his mouth; and several others. Miss Peregrine protects these children not only from the often cruel outside world and certain death via a Nazi bomb, but also from a band of evil, power hungry “peculiars” – led by Samuel L. Jackson’s mad scientist type – who eat the eyes of other gifted folk to maintain a somewhat human form instead of turning into monsters that look curiously like they just stepped out of a Silent Hill game.

Burton and Goldman have a lot of set-up to get through here in just a shade over two hours, but it’s in that building of place and character where they excel, and the film feels vibrant and whole. It’s very easy in the early going to get lost in the world of Miss Peregrine’s Home for Peculiar Children. While Burton could have easily given into the temptation to make something akin to his candy coloured, effects heavy efforts Charlie and the Chocolate Factory and Alice in Wonderland, he instead errs on the side of relative restraint. There’s something about films set in present day and period pieces that bring out the best in Burton, and a fantasy like this that takes place in both kinds of worlds simultaneously plays to his strengths as a filmmaker. Films like Alice in Wonderland and the overblown macabre of Sweeney Todd showcase the wrong side of Burton, a side where the creation of a total fantasy world from the bottom up is a bit too much. This feels more closely indebted in its early going to something like Big Fish, Ed Wood, or the Margaret Keane paintings showcased in his underrated biopic Big Eyes. It’s warm, somewhat dark, but always balancing the fanciful with a humanist sentiment. 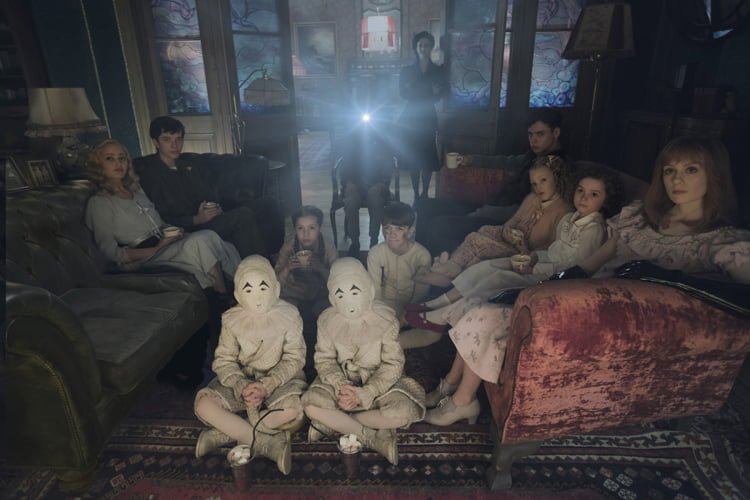 Visually, Burton pulls back on the reigns a bit as well for something more in his classical gothic wheelhouse than something a lot more needlessly fanciful. While the production design is gorgeous, the focus is placed squarely on how the characters behave within Goldman and Riggs’ narrative constructs instead of how the background looks. It’s also a nice touch that the beautiful, subtle score provided by frequent Burton collaborator, but first time composer Michael Higham and Matthew Margeson (who worked on several films penned by Goldman and produced by Matthew Vaughn) is able to come through and punctuate the film as well as it does. It’s one of the best pairings of music and visuals I’ve seen all year.

But while the lead up is all well and good, things start falling apart in the second act of the film and deflate rapidly during the climax. So much energy is spent trying to build up the characters, establish the world around them, and make the audience care for them that the danger the villains pose feels unclear. These evil peculiars seem easily thwarted and they only stumble across Miss Peregrine’s home seemingly out of a momentary lapse of stupidity from Jake. Add to this a time travelling narrative device that starts off remarkably novel, but quickly becomes a way to mask a choppy transition from book to screen, and things become a lot less fun. It rushes, seemingly because the film seems to have run out of an allotted amount of time.

Jackson’s fun to watch as a hammy villain, playing a sort of supernatural variation on his character from Kingsman: The Secret Service (another Goldman/Vaughn production, which along with this and the recent X-Men films all suffer from similar problems), but the viewer has already gone into this film probably knowing it’s the first film in an intended franchise. He can’t do anything too terrible or else the series won’t continue. While that would be a clever swerve that I hope someone achieves in the future, all it amounts to here is Burton and Goldman pulling off one of the most out-of-nowhere deaths of a major side character since Jackson died in Deep Blue Sea. That doesn’t make this film any better, but it’s a notable high point that occurs while the rest of the film is in decline.

The film stops trying to make sense of all the wibbly-wobbly, timey-wimey stuff and launches headlong into a bafflingly unenthusiastic climactic set-piece at a boardwalk amusement park. Entire characters are forgotten about entirely and without explanation, with the viewer left wondering whatever happened to them. What was once an interesting film about thoughtful characters put in peril devolves into a CGI mess that neither Goldman nor Burton seem all that excited about. Even the numerous extras watching these freakish kids doing battle with invisible monsters in broad daylight just seem confused and nonplussed by what they’re seeing. It’s one of the worst action climaxes I’ve ever seen tacked onto what’s ostensibly still a decent enough movie. Thankfully, the strong cast, especially Butterfield and Purnell, keep things watchable throughout.

It leaves me curious to see where the franchise goes from here. To draw another parallel to the Fox owned X-Men franchise, the first Bryan Singer film in that series was fun, but wonky; full of potential but building to very little of real consequence. That’s the same feeling here. Miss Peregrine’s Home for Peculiar Children isn’t so much a Tim Burton film in the traditional sense, but a franchise starter that doesn’t have nearly enough time to work with as it needs to succeed. That usually means the next film will be a step up. While there’s still a lot here worth liking, it remains to be seen if the potential franchise can improve on the whimper this one goes out with.

Check out the trailer for Miss Peregrine’s Home for Peculiar Children: