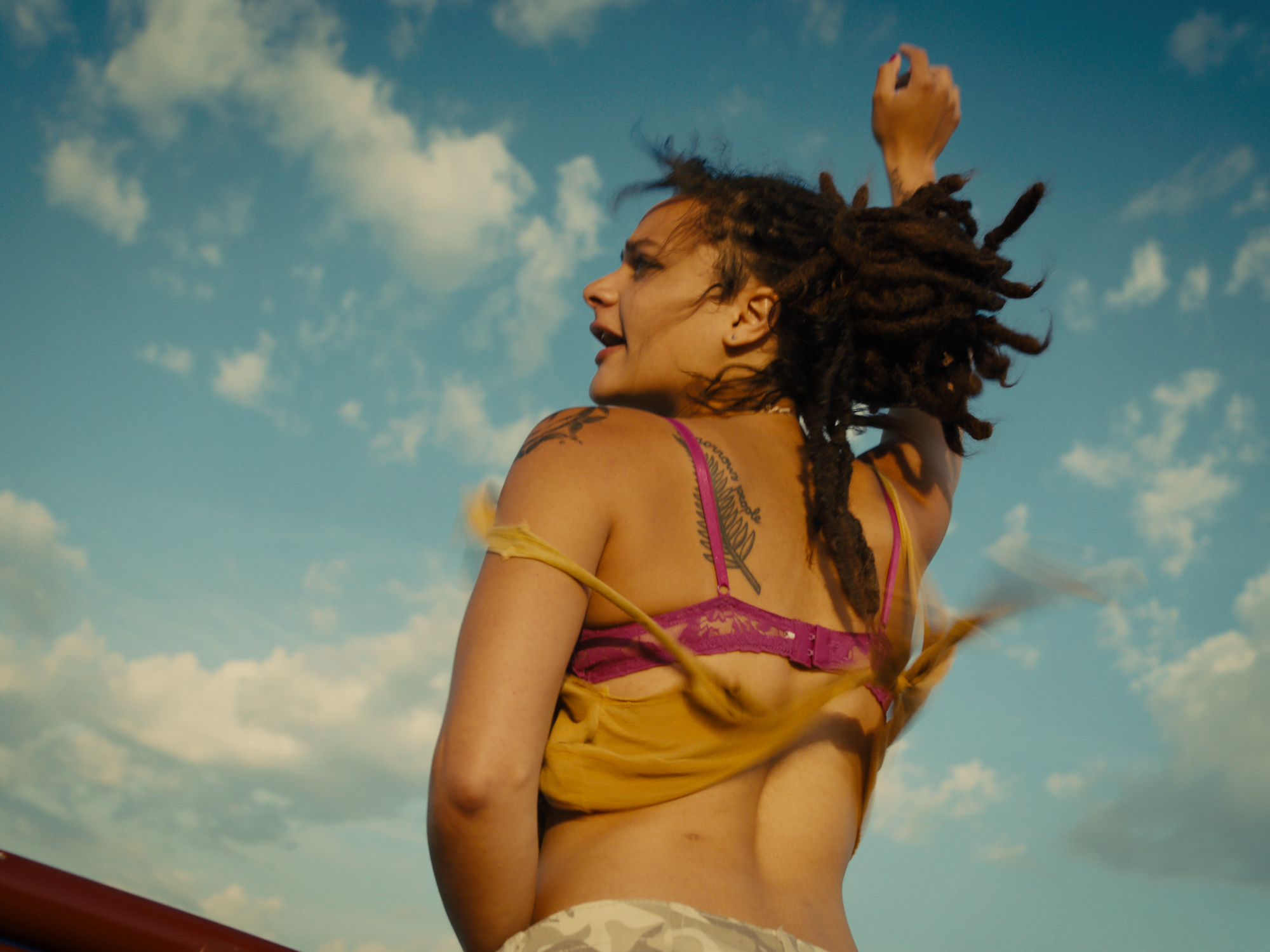 American Honey, filmmaker Andrea Arnold’s sprawling, warts and all look at modern Americana, is both a staggering achievement and a bit too unwieldy for its own good. As a look at life, happiness, and everyday conflict on the margins of American society, it’s almost unparalleled. No one has captured characters quite like this before or since, yet many viewers will instantly recognize these kinds of people, and probably just as many young people will find themselves identifying with the characters in the film. It’s just a shame that the film itself goes on far longer than it needs to, and long after it has run out of new and interesting things to say.

Star (Sasha Lane, making her big screen debut) has plenty of love, empathy, and skepticism to go around despite only being eighteen. When Arnold’s film begins, she’s dumpster diving for food and taking care of her white trash boyfriend’s kids. Desperate for escape, she has a chance encounter with the charismatic, laid back, and charming Jake (Shia LaBeouf), who manages and trains a band of hard partying young adults who go door to door on behalf of their money hungry boss (Riley Keough) as part of a pyramid scheme selling magazine subscriptions. Star leaves her old life behind and joins up on the crew’s massive road trip, where they cater their sales pitches and appearance to the general level of affluence in whatever neighbourhood or state they find themselves in. They hit up truckers at rest stops, oil field employees starved for female attention, wealthy rednecks, and impoverished trailer park residents that aren’t much better off than they are.

There’s an uneasy, on-and-off romance that sparks up between Star and Jake that informs both characters, but that’s really just a unifying thread for Arnold’s vision. American Honey isn’t a film about destinations and resolutions, but one about a constantly evolving journey among a group of lost boys and girls. Much of American Honey has a documentarian quality to it where it feels like the viewer has ample time to take in the surroundings and become acquainted with the subculture being depicted. With a cast comprised mostly of young men and women who lived this kind of transient lifestyle instead of trained actors, American Honey looks and walks the part. There’s an unshakable genuineness to what we witness on screen, whether it be drunken sing-alongs in the van, cruel fights where the two lowest sellers have to duke it out in front of everyone else by orders of the Queen Bee, or random encounters with various customers that Star is occasionally enthralled or disgusted by. Each new turn in the road taken by Arnold feels like a new film featuring the same people. That’s mostly a compliment.

It’s also uncannily realistic. I definitely recognize these kinds of people. They’re the ones with hardly a dollar to their name, looking to hustle and eke out a living by any means necessary. There’s a brashness and bravado to them that never acknowledges that they’re not living their best lives. They think they’re living it, and they’re happy in the moment, but the scariest part of American Honey is pondering what these young people will do when the bottom drops out. These are the kids from the literal wrong side of the tracks. Often they come from failed manufacturing cities and towns or suburbs that were too square to contain or understand them. These people are as real and American as it gets. Some might call them “ugly Americans,” but they’re as genuine as it gets. If they don’t remain confident and constant in their goals, they don’t survive. That’s America in a nutshell, pictured in glorious, unembellished full frame cinematography instead of anything grandiose and poetic. The only think close to pastoral is a love scene between Star and Jake, and even that feels like a fleeting memory in the grand design of Arnold’s work. This is America and it is what it is. Arnold (Fish Tank, Wuthering Heights) simply turns her camera and ear onto this world and takes in what she sees with an almost anthropological bent. This is the Easy Rider of its generation in many respects and insomuch as this generation could actually HAVE an Easy Rider equivalent. They went out looking for the American dream, and they’re still searching for it. 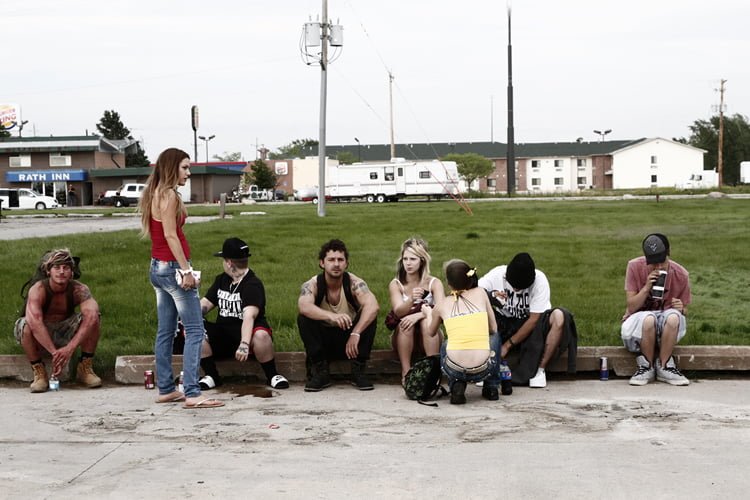 Lane and LaBeouf are perfect guides to this world because neither is wholly likable, and both have the capacity to ruin things and act terrible to those around them. They betray each other, and they betray their own ideals; shrugging it all off so that the guilt of poor decisions doesn’t consume them. It’s easy to be around them, though, because they aren’t inherently bad human beings with evil intentions and neither seems to have been crushed by the world yet. It’s easy to forgive their mistakes because the viewer never wants to see either of them harmed. Keough provides a perfect foil for this as a Machiavellian character who has been crushed by the world (although we don’t ever find out how), and who has morphed into a charismatic bully.

It’s all rather hypnotic and engaging for about an hour and forty minutes or so, and it doesn’t really matter where American Honey heads or if there’s any resolution. Where the film stumbles is that it’s a two hour and forty-six minute opus that starts to grow rather predictable. With each progressing scene, regardless of how it fits in to Arnold’s point of view, American Honey grows stagnant. Early on, the turns in the road are novel, but then around the halfway point, every passing encounter can be telegraphed before the characters can even get there. Each passing scene grows more and more predictable, testing patience in ways that are counterintuitive to Arnold’s M.O.

It’s still an energetic film on a visual and emotional level, but the material starts growing thin and weary, giving the cast less and less to do. Just when things should be getting interesting, American Honey becomes a passive viewing experience instead of an immersive one. It’s like going on a really great trip and about halfway through the hosts tell you they have nothing else for you to do, so you cobble together the best you can come up with to pass the time. It’s the kind of film that could end at any time, but it would have been a lot more satisfying and succinct without sacrificing any kind of feeling if it were to end sooner than it ultimately does.

American Honey has no real resolution, but it also never really had a plot beyond the arc of its protagonists. It doesn’t need to go anywhere, but it could have benefitted from some consistency. I’m not saying that the film needs some major swerves, suspense, or manufactured fakery to come together, but I have a hard time believing this is the best that the second half of a really strong film could come up with. The only other film that I could compare this to that makes a similar mistake is Stanley Kubrick’s Full Metal Jacket, but that, like this, remains a fascinating film in spite of its faults.

Check out the trailer for American Honey: