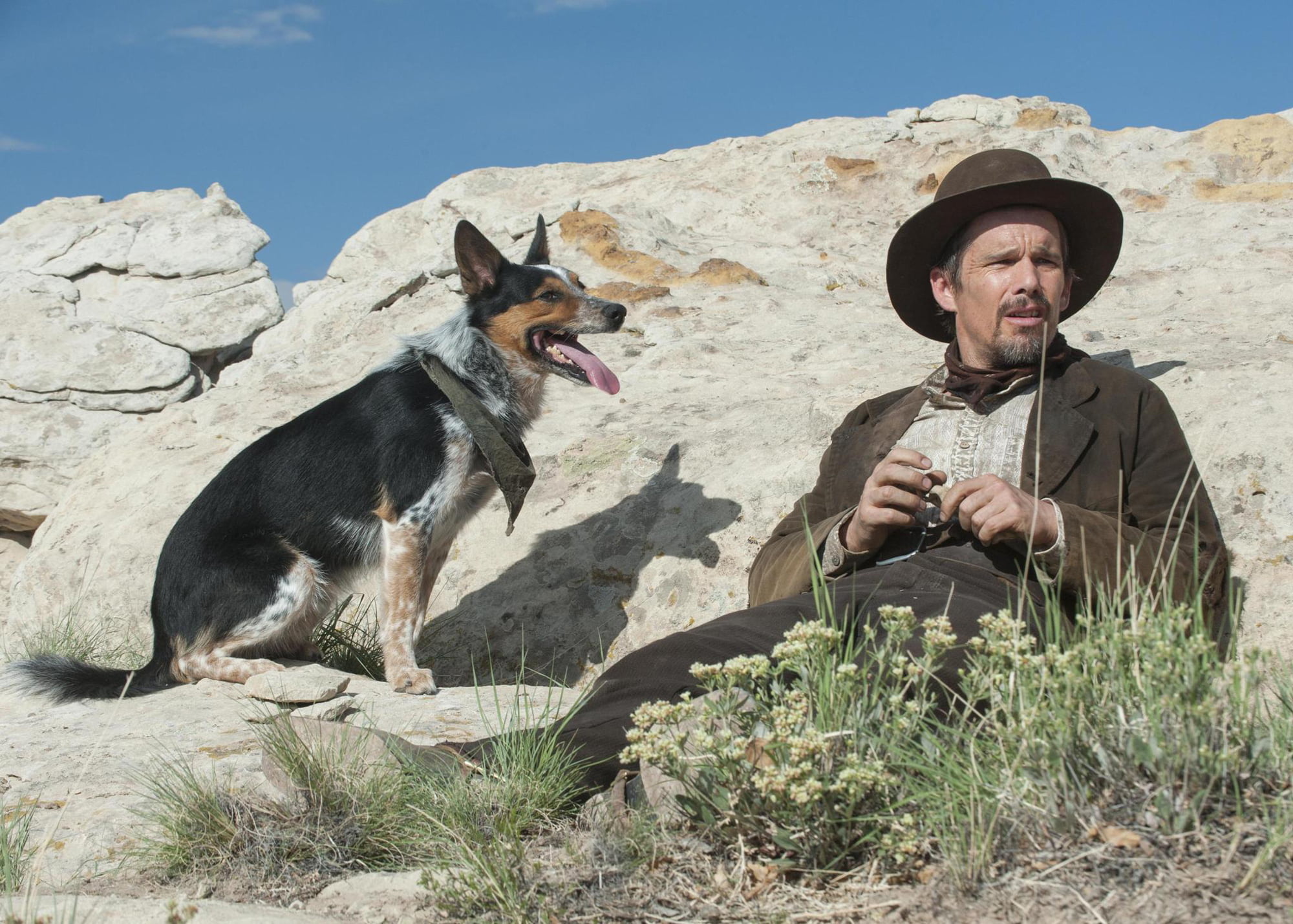 We continue our coverage of the 2016 Toronto After Dark Film Festival with reviews of the sci-fi/action flick Kill Command, the western In a Valley of Violence, and the horror thriller From a House on Willow Street. The all genre film showcase- celebrating its 11th anniversary – is now happening at Scotiabank Theatre in downtown Toronto through Friday, October 21st. For a full list of films, directions, tickets, or more information, check out the Toronto After Dark website, and keep checking back throughout the week for more looks at films from this year’s festival!

The low budget “soldiers vs. killer robots” yarn Kill Command is a shining example of making something look like a grand epic on a shoestring budget. For his debut feature, writer and director Steven Gomez has fashioned a simple sci-fi/action plot that comes with a maximum wow factor for such a low budget production. There wasn’t a single moment of the film where I wasn’t questioning how visual effects artist Gomez was able to pull all of this off. I was questioning plenty of other plot points, but the spectacle of Kill Command and a handful of great ideas carry things a long way.

Sometime in the future, Marines have almost been entirely phased out in favour of drones and fighting robots. Most of the human soldiers left are kept around for show and sent out on routine, often boring training exercises that amount to nothing more than a waste of everyone’s time and money. On one such seemingly pointless exercise a band of soldiers is accompanied by Katherine Mills (Vanessa Kirby), a cyborg-ish human/robot hybrid thingy (honestly, I can’t totally explain what she is) who works for Harbinger, the U.S. government contractor who supplies the fighting robots. When they arrive to the training grounds somewhere in the middle of the woods, however, the Marines find themselves up against robots that seem to have gone rogue, switching out their blanks for live ammo and hunting the human troops down one-by-one. The troops don’t trust Katherine, who can control all their weapons simply by looking at them and shutting them down, but seems to be have trouble controlling the renegade bots. She’s their only hope for survival, but she also has no clue what’s going on.

The plot is basically that of Walter Hill’s Southern Comfort, but with robots instead of rednecks (something I never knew I wanted until I saw Kill Command) and a healthy dash of the Alien franchise thrown in for good measure. It works, and Gomez keeps the action moving with few slow lulls where cracks in the plot start to become noticeable. It’s also fairly predictable and nothing really comes as a surprise, but the sheer scope and ambition of such a low budget sci-fi flick is more than commendable. It sounds on paper like something that should be showing on the SyFy Network, but it’s way better than that. Here’s hoping Gomez gets some more money for his next effort because he has certainly made a heck of a calling card here.

Check out the trailer for Kill Command: 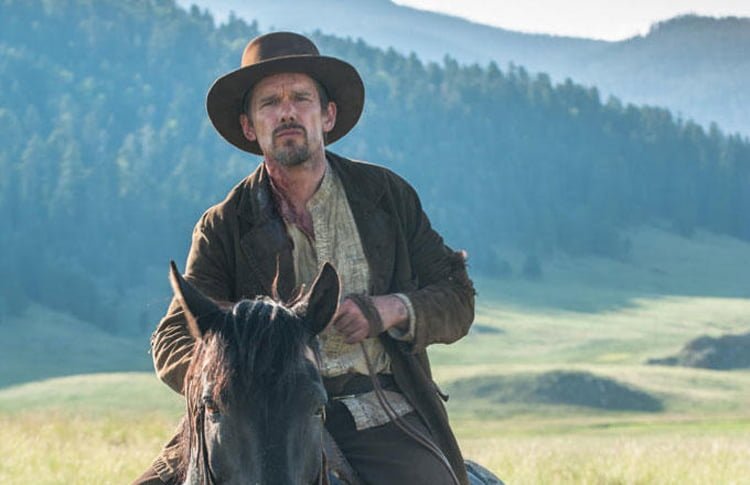 In a Valley of Violence

Filmmaker Ti West (The House of the Devil, The Innkeepers) abandons the spooky stuff for the unpretentious western throwback In a Valley of Violence. It isn’t quite as deep or clever as West’s past efforts, but as a no-frills approximation of bottom-of-the-card-on-a-triple-bill drive-in fare goes, it does the trick.

The plot can best be summed up as John Wick Goes West, but not nearly as exciting as that sounds. Ethan Hawke stars as Paul, a U.S. Army deserter who walked out on the American-Indian War after witnessing unspeakable atrocities and having a change of heart. En route to Mexico and with his trusty dog Abby in tow (played by Jumpy in as great of a performance from an animal you’re likely to see all year), he makes a stop in the tiny former silver mining community of Denton. It’s a community where good people are fearfully lorded over by the sadistic Gilly (James Ransone, doing an old west riff on his character from The Wire), the town’s deputy sheriff and son of the town’s chief lawman, Clyde Martin (John Travolta). After Paul refuses to take crap from Gilly, knocks him out, and quietly attempts to leave town, the deranged deputy rounds up a band of his cronies track him down in the middle of the night to send him a message, thus kicking off a pretty standard western revenge plot.

West has clearly studied the storytelling dynamics of how to make a stripped down oater, but the film’s settings and pacing work against his usual sense of style, leading to a decently written film from West that feels pedestrianly directed. But when one has a cast this capable of providing entertaining B-movie thrills (including a nice sisterly dynamic between Tassia Farmiga and Karen Gillan as hotel proprietors who want to see Paul stay and leave, respectively, and Burn Gorman as an alcoholic, less than holy preacher) it’s hard not to be invested by it. In a Valley of Violence isn’t a great western or even all that memorable of one, but it’s a fun time in the moment.

Check out the trailer for In a Valley of Violence:

From a House on Willow Street

Director Alastair Orr’s South African produced horror flick From a House on Willow Street starts off as a home invasion thriller, morphs into a paranormal film where a kidnap victim turns the table on her abductors, and ends in Evil Dead territory. Not all of it works, but From a House on Willow Street is packed with more than a handful of great moments, expert pacing, and some clever ideas.

A band of kidnappers – led by Hazel, played by You’re Next star Sharni Vinson – abduct Katherine (Carlyn Burchell), the adult daughter of a wealthy diamond magnate. Not long after they get Katherine to their abandoned warehouse hideout do the abductors realize that they likely won’t be getting a ransom for the girl’s return, but that they’re in way over their heads. Instead of doing something they thought would make them rich, they might have done Katherine a favour by letting her out of her Willow Street home.

Outside of a few miscast supporting characters with wonky performances and a couple of nagging questions about certain plot details I can’t reveal without spoilers, From a House on Willow Street takes a story that reveals only a little at a time, but never allows it to feel like a slow burn. Orr keeps things moving along briskly and plays the mental breakdowns of everyone involved play out concurrently with the plot’s slow reveals. There’s a really nice element here that connects the character of Hazel directly to Katherine that adds quite a bit of emotional weight to things, and it’s refreshing to see a film like this anchored by two female characters instead of alpha males. Vinson and Burchell are great, as are some truly stellar make-up effects that provide more than a few gory delights. Overall, it’s a solid thriller with some well explored concepts that will keep viewers guessing even when they think they have everything figured out.

From a House on Willow Street screens on Thursday, October 20th at 9:30 pm.