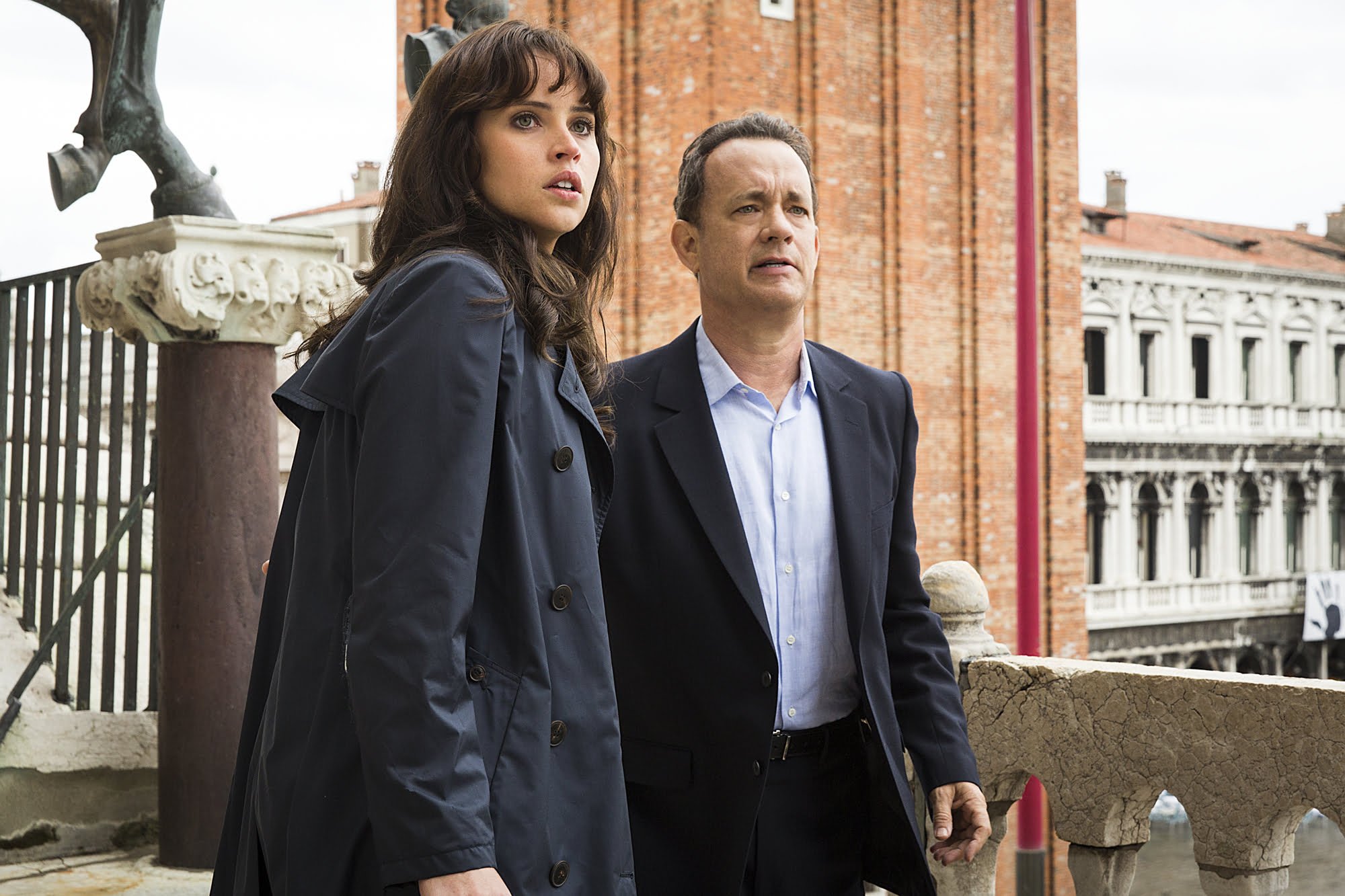 I don’t think there are many people out there who would call author Dan Brown’s potboilers literary masterpieces, just as I doubt there are many who would lavish lofty praise on the director Ron Howard’s cinematic adaptations of them. These are silly stories with risible plots, outlandish characters, more twists than a pretzel factory, and a resigned sense of almost knowing idiocy that consistently walks the fine line between seriousness and outright parody of itself at every turn. They’re pretty crappy books, but easy to get caught up in, and the films tend to serve as a faithful reflection of Brown’s prose.

Hot on the heels of Howard’s wildly successful adaptations of Brown’s The Da Vinci Code and Angels & Demons comes Inferno, the most successfully cinematic Robert Langdon yarn to date. In comparison to its brethren, Inferno is still dumb as a box of rocks, but at least it’s light on its feet, offering up a more streamlined thrill ride instead of lots of ponderous, sometimes pretentious exposition that ties the core mystery back to famous art and literature that has no business being brought up in the same breath as one of Brown’s books. It’s a two hour chase film with a ticking doomsday clock and increasingly laughable swerves, but at least it’s never boring and what the material lacks in smarts, Howard makes up for in energy.

Tom Hanks returns as Langdon, an academic who specializes in religious iconography and symbolism who’s constantly getting dragged into potentially deadly situations with worldwide implications. Inferno thrusts Langdon headlong into his latest adventure with little warning or set up. Langdon wakes up in a hospital room in Florence with no idea how he got there from Boston or why he went there in the first place. As soon as he wakes up, a mysterious figure attacks the hospital and makes an attempt on the professor’s life. He goes on the run with his doctor, Sienna Brooks (Felicity Jones), and the pair try to piece together Landon’s lost time. It’s all tied to a deadly virus set to be unleashed by a recently deceased, reclusive, megalomaniacal tech billionaire (Ben Foster) who wants to spread the disease in a bid to forward his population control agenda.

The clues to deciphering the mystery here come tied to Dante and Carvaggio (in case you couldn’t tell from the title), but they’re all largely secondary to the fast and furious action on display here. Taking place over roughly a twenty-four hour period, Inferno doesn’t have time to dilly-dally, and veteran genre screenwriter David Koepp (Jurassic Park, Mission: Impossible) knows that keeping the set pieces and double crosses moving means viewers have less of a chance to add up in their head that none of this makes a lick of logical or narrative sense. It’s a decent enough primer in how to make a lunkheaded action picture with a thin veneer of prestige and glamour to it. Inferno in no way requires viewers to familiarize themselves with Howard’s previous Brown adaptations (but considering those were blockbusters, they probably are) since the amnesia gambit means a viewer can be just as lost as the main character and have a fun time getting caught up in the kinetic nature of the mystery. 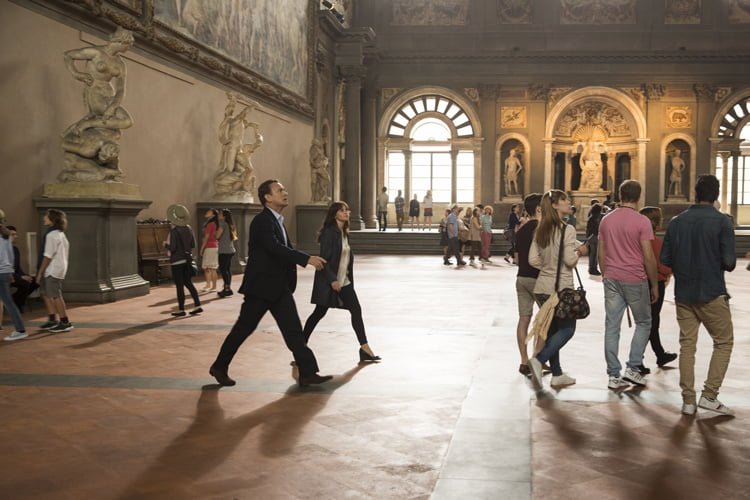 As with previous entries, Howard has populated the cast with solid character actors to play off the always reliable and watchable Hanks. Even though he’s in little of the film, Foster seems to be relishing the chance to play a smarmy rich man with a not so hidden agenda and evil intent. Jones fills her rather obvious sidekick role nicely. Omar Sy and Sidse Babett Knudsen lend the film some much needed dramatic heft as duelling officers from the World Health Organization trying to stop Langdon from unwittingly releasing the virus. The biggest scene stealer, however, is Indian superstar Irrfan Khan as the ass kicking, take-charge head of a “risk management” firm who gets involved when he realizes that getting involved with Foster’s billionaire was an awful idea.

Howard still isn’t a masterful stylist as a filmmaker, but he does know the right people to hire. Outside of landing Koepp (a master when it comes to telling such convoluted, fast paced tales), he has spared no expense in trying to give the film a real sense of scope and wonder. Whereas the other films in the series felt a bit like travelogues in their slowest moments, Inferno has no slow spots, meaning that the art department and camera crews have to capture the beauty of Langdon and Brooks’ artistic surroundings in as little time as possible. The effect is like being led on a guided tour by a sugar addled eight year old, and instead of that being a negative, it’s rather quaint here considering the story being told.

Is Inferno a good movie? Barely, but it’s the best in a relatively asinine franchise. It isn’t even that great of an action film, meaning it’s only clearing one of the lowest bars possible for success. Outside of some septuagenarians who might need to realign their pacemakers, there’s very little here that will shock or surprise, and Howard, Brown, and Koepp’s big reveal towards the end is so obvious that the character it’s tied to might as well have a neon sign around them saying “IT WAS ME! IT WAS ME ALL ALONG!” Still, these kinds of stories have their time and place and if one were to put it on a sliding scale alongside other adaptations of dubious literary bestsellers, Inferno still comes out relatively on the high side. Energy counts for a lot when it comes to these films, and for the first time in three attempts, Howard seems to have finally cracked the code.

Check out the trailer for Inferno: