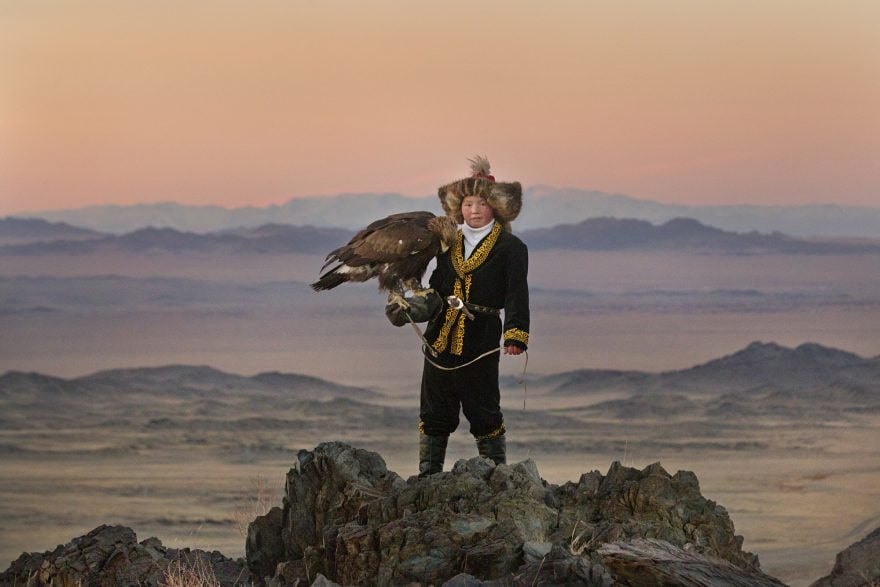 Empowering, often thrilling, and rigorously cinematic, Otto Bell’s debut feature The Eagle Huntress has all the elements to create a rousing, crowd pleasing documentary. In fact, it looks and moves so much like a fictional film that viewers might often forget that they’re watching a documentary. Edited to keep things at a fast pace, packed with dialogue that feels like scripted bits of exposition (although they might not be), and set to a score befitting of an action film, this look at a young girl’s desire to become one of the best in a male dominated field both benefits and suffers from the wealth of style being employed, but overall it’s a fun watch.

Narrated in parts by actress and producer Daisy Ridley, The Eagle Huntress follows thirteen year old Aisholpan, a young woman living with her family in the mountains of Kazakhstan. A skill normally passed on from father to son by hunters in the region, eagle hunting is equal parts practicality and show. It involves capturing a baby eagle, raising it as one’s own, and training it to help ensnare, incapacitate, or kill fast moving prey like foxes and rabbits. It’s a necessary skill for at least one member of each family to master, but like many cultures in the region, teaching such skills to a girl is looked upon skeptically by many. Her father Nurgaiv (who explains much of the specifics of eagle hunting, and oddly the film’s plotting, to the audience) embraces his daughter’s wish to compete in a yearly show competition, but the real test of Aisholpan’s abilities will lie in the sometimes harsh winter hunting season.

While most documentaries on such a subject would often let things play as they would in reality, The Eagle Huntress swings for the emotional and visual fences at every turn. Bell tries to get in as many sweeping shots of the mountain pocked skyline and slow motion action pieces of eagle swooping down from on high to land perfectly upon the arms of their owners. It’s all edited for maximum suspense, and in ways that lead to entertaining, accomplished sequences that sometimes strain documentarian credibility. There are parts that speak to Aisholpan’s schooling (which takes place at a live-in academy several hours away from home), but that’s not nearly what interests Bell and his crew.

An already death defying sequence where Nurgaiv lowers Aisholpan down a rocky cliff side to retrieve her first baby eagle from a nest doesn’t need too much embellishment since the task at hand already seems harrowing. Bell doesn’t think this is quite enough, and keeps cutting back to shots of the mother eagle circling overhead, but politely never getting involved in the kidnapping of her baby. It’s like adding a ticking clock to an already tense situation, and it’s hard to believe if the mama eagle were that close that it wouldn’t swoop in to attack Aisholpan immediately. At times The Eagle Huntress is a film about the natural world that wants to defy the laws of nature in the name of more standardized methods of storytelling. 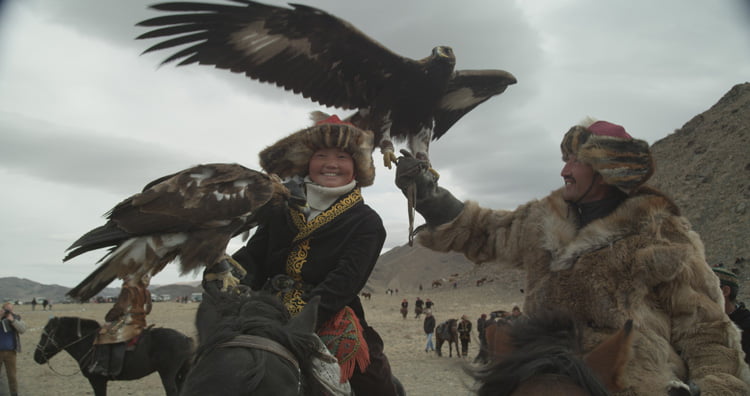 But even when the film’s structure strains credibility, it’s easy to root for Aisholpan. One doesn’t need a documentary to know that it’s tough being a young woman in one of the world’s most staunchly patriarchal cultures, and it isn’t until relatively late in the film that Bell broaches the prejudices she faces by choosing hunting as a skill she wants to learn. That’s a smarter choice than a lot of the other stylistic gambits being employed here, with the film creating a strong heroine with a supportive father figure who still can’t get any respect after proving her worth. She’s going up against a culture made up almost exclusively of old men, and she deserves just as much respect for that as she does her growing talent. While Bell might be trying to make something closer to fiction out of reality, he certainly doesn’t insult the social intelligence of the viewer.

For all that can be frustrating about The Eagle Huntress, it’s still a harmless bit of inspirational filmmaking. If it can make at least one little girl living in a similarly oppressive place or help someone to be a better mother or father to their kid, then I think Bell’s film would be a qualified success. It’s an overly slick and polished sort of documentary of the kind that usually raises a few skeptical eyebrows, but the heart is always in the right place and the message is one worth delivering to as large an audience as possible.

Check out the trailer for The Eagle Huntress: