For those who like their sleaze with a thin layer of prestige, a great leading performance, and a director with a knowledge of all things dirty and psychosexual, Paul Verhoeven’s Elle will hold a great deal of appeal. You do really have to like or at least be comfortable with the sleazy part of that equation, though. For his first foray into French language cinema, the Dutch auteur and one time can’t-miss director of English language studio blockbusters teams up with leading actress Isabelle Huppert for a refined, but still purposefully off-putting thriller.

Huppert stars as Michele Leblanc, a hard charging co-owner of a video game producing software company with a literary and publishing background. Her adherence to making a storytelling a priority over playability of the product makes her somewhat difficult for the programming staff to work with. Her personal life is a mess, vaguely carrying on with a boyfriend she seems disinterested in (who also happens to be the husband of her best friend and company co-owner), harbouring a quietly sexual crush on the husband of her neighbour across the street, constantly having to deal with her sex addict mother, wrestling with the memory of her nefarious criminal father, and trying to figure out what to do about her ex-husband and soon-to-be-unhappily-married adult son. She’s so wrapped up in herself that a potentially life changing event – getting raped at the hands of a masked home invader – barely registers with her. She simply puts her head down, keeps going, and decides to deal with the fallout and trauma seemingly when she feels like she’ll have time to do so.

Although an original and slow burning approach to the well-worn and resolutely sexist rape revenge subgenre of thrillers, Elle wouldn’t be half as engaging without Huppert’s involvement. Screenwriter David Birke’s adaptation of Philippe Djian’s novel emphasizes character over plotting – which is a smart move – but it’s still just an excuse to throw out a bunch of lovingly crafted red herrings for Michele to puzzle over as she attempts to uncover the identity of her assailant. While Birke quite deftly sets up a lot of separate but equal problems for Michele to deal with amid her quietly simmering crisis, the main character is written in such a way that the reveal of the rapist (which is painfully obvious despite any and all efforts of obfuscate it) becomes immaterial. The real psychological reveal about Michele’s motivations has been telegraphed so long by Huppert and Verhoeven that it barely registers as a blip. 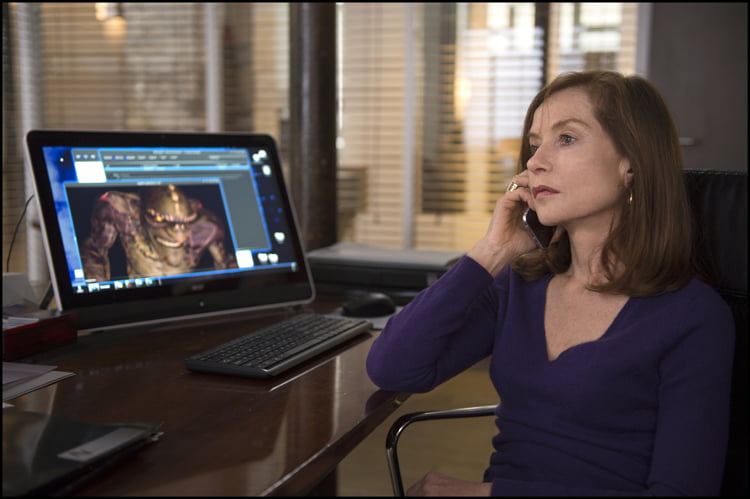 With such obviousness permeating throughout the material and nothing remotely in doubt, Verhoeven doubles down on the script’s few humorous beats for maximum ironic effect. It’s not a bad choice, and something that the talented filmmaker brought to many of his best and most memorable efforts. But at 130 minutes, the detached feeling of Elle becomes a chore to sit through, especially during the film’s plodding final third that attempts to answer how Michele’s life has changed after figuring out who assaulted her. Verhoeven mounts a few clever disses to Catholics and video gamers and his love of all things Hitchcockian (underlined by a scene where Michele pleasures herself while spying on the neighbours) remains firmly intact, but they feel more like slight spice when compared to what Huppert is doing for the film around her.

Despite Verhoeven’s best directorial efforts, Elle entertainment and intellectual value becomes solely about watching Huppert singlehandedly carrying material that’s always in danger of having the wheels come off in the film’s second half. Huppert’s Michele can put someone in their place physically, psychologically, sexually, or with something as simple as a well placed scowl. Huppert depicts Michele as cold, but not entirely uncaring; the result of someone who spent so much of her life being talked down to that her thick skin has left her cynical, but her heart remains ever so slightly sympathetic. Huppert brings out the latent darkness of the character and beautifully pulls off the feat of making someone so stoic into a relatable, powerful, borderline admirable human being. She’s in almost every frame of the film, and she commands the screen more than Verhoeven or the script. Even when the film isn’t exactly a delight or a thrill to sit through, she’s consistently watchable.

As for the obvious claims some could make that Elle might be too sexist or sleazy for its own good, I would leave that argument to the individual viewer. Elle could be read as a sexist bit of trash from a filmmaker who wrestles with that charge constantly or as a different kind of look at feminist empowerment. I can’t add anything to the discussion because it’s not that interesting of a film to have such a conversation about it, and the fact that it can be read both ways speaks to just how little Elle has going for it. Not every film needs a trajectory, but a film that thinks it’s as clever, perceptive and ironic as Elle does should have one. It’s not a nihilist or anarchistic work, so the lack of anything approaching even a muddled sort of morality comes across as puzzling and cold. It’s not a terrible film by any stretch, and I mildly liked it, but without Huppert it becomes instantly forgettable.

Elle opens in Toronto and Montreal on Friday, November 18.

Check out the trailer for Elle: