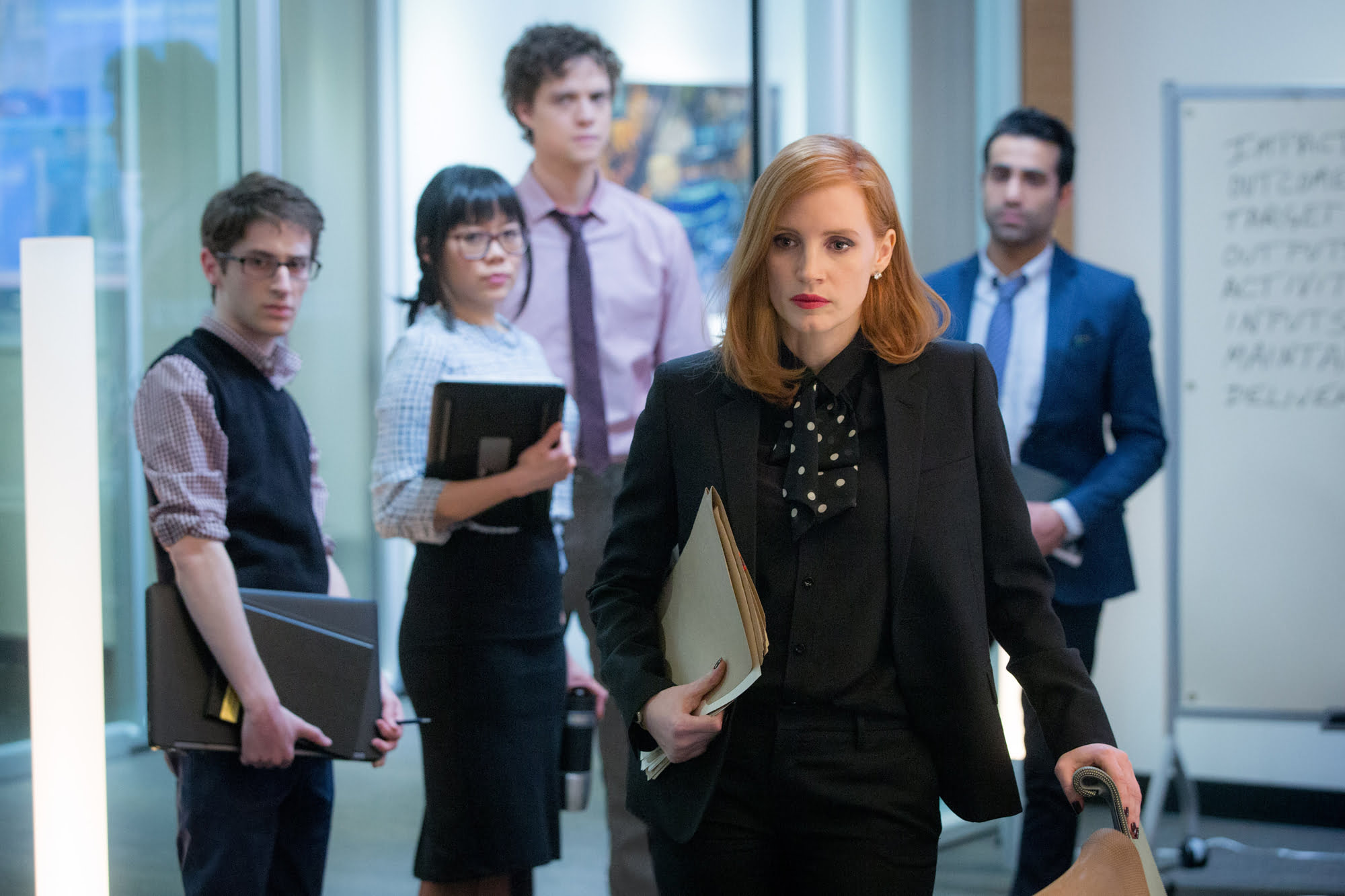 Jessica Chastain once again plays a hardnosed, take-no-prisoners professional type in Miss Sloane, the latest effort from director John Madden (Shakespeare in Love, The Best Exotic Marigold Hotel). It’s a well meaning, agreeable tale of do-gooders, master manipulators, and profit driven evil types trying to navigate a broken American governmental system where lobbyists with bottomless budgets and politicians’ personal interests take precedence over any attempts at change and reform, but it’s also a rather silly film that’s more entertaining than righteous in its cause.

Chastain channels the same kind of balance of idealism and ire that she displayed in Zero Dark Thirty as Elizabeth Sloane, a gruff, demanding lobbyist and consultant for one of Washington’s most sought after firms. She’ll use any means necessary to make sure her clients win – bribery, blackmail, staged protests, flat out lying, nothing is off limits – but she’ll only take on cases and clients that she can find herself in moral agreement with. When her perpetually apoplectic boss (Sam Waterston at his most “on edge”) approaches her to work with a Second Amendment organization (the film curiously never once says the letters NRA, but it’s heavily implied) to make gun ownership a women’s rights talking point, she quits. She takes a job for a much smaller firm run by Brady Bill backer Rodolfo Schmidt (Mark Strong) in an effort to sink the gun lobby, stick it to her former employer, and implement the mandatory background checks that gun rights advocates lose sleep over.

The tactics employed by Sloane don’t change between firms, and the best elements of first time screenwriter Jonathan Perera’s story come from the tension the character exhibits towards those around her. The biggest and best trick in Chastain’s stuffed to bursting bag of acting talents is the effortless ability to convey moral ambiguity, and without her involvement Miss Sloane might not have worked as well as it ultimately does. Chastain revels in playing characters that are as admired as they are feared, and Elizabeth Sloane is no exception. People in her office want to watch what she’s doing because they think they’ll learn something, but when they see what she’s doing, they wish they were never around her. She’s addicted to winning, talks down to everyone around her equally in a bid to assert her moral and intellectual superiority, pops amphetamines like Tic-Tacs, and likes to have sex with gigolos as a way to calm down at the end of the day. To place a character this borderline amoral and almost sociopathic at the fore of such an admittedly noble and just cause gives the film an intensity that a story about a goodie-two-shoes going up against the evil establishment would have lacked. That narrative gambit, Madden’s tightly paced direction, and Chastain’s more than game involvement is really all Miss Sloane needs to succeed.

The bulk of the story deals with Sloane and her team (many of whom followed her Jerry Maguire-style from her last gig) trying to secure the votes of 60 senators in 84 days to pass gun control legislation, which leads to some dutifully constructed, fast paced, Sorkin-esque walk-and-talks that play out between the warring sides. At Sloane’s new gig, her ace-in-the-hole (and potential self-destruct button) is Esme (an underused Gugu Mbatha-Raw), a true believer in the cause and a survivor of a school shooting that wants to leave her past in the past instead of using it as fodder for the campaign. Her equally Machiavellian opposition at her old firm, played by Michael Stuhlbarg, also has a secret weapon: Elizabeth’s former personal assistant, played by Alison Pill, who stays behind because she doesn’t want to ruin her growing reputation in the industry. 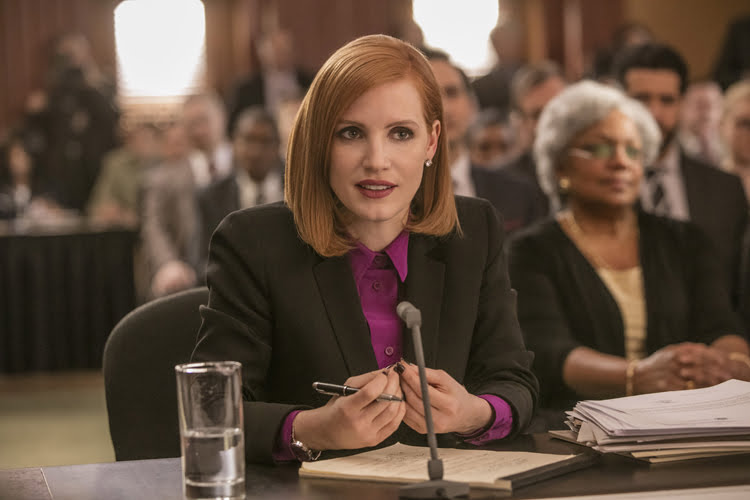 Watching both sides counter, thrust, and parry through their legal manoeuvrings is fun, but it never comes across convincingly as being real. While it’s not based on a true story and it doesn’t need to be, there’s a large suspension of disbelief needed when approaching Miss Sloane. As the villains start learning more and more about Elizabeth’s persona endeavours and past shady deals in an effort to discredit her, the audience has to forget that she’s a smart, tough character who should have been able to see all of that coming. As the twists involving the personal lives of these characters continue to mount, things get sillier and a lot more obvious. Still, there’s a distinct sense that each of the potential rail jumping twists are building towards some kind of grand reveal towards the end that Sloane always planned for. Some of these reveals are obviously foreshadowed and others are quite novel and involve people putting aside their egos, but it all feels more like a heist film that’s trying to get one over on the audience than a film that’s trying to make a serious, distinct political statement.

And while that works just fine for a dramatic film that’s trying to deliver a healthy dose of entertainment and a tiny bit of education, there’s always a sense that Madden and Perera expect the material to do more than it can. In the current American political climate, there’s an important discussion to be had regarding gun control and the role women will play in that discussion, but Madden and Perera get so caught up in their shell game that no amount of impassioned speeches or pained looks on an actor’s face can hammer home the message that’s getting lost here. Miss Sloane could have been an important film with high entertainment value, but instead it’s just a pretty good bit of entertainment with some mildly interesting subtext that should be text.

Also, it might bug some people that a large majority of Miss Sloane – which employs a large amount of notable Canadian actors in smaller roles – was obviously filmed in Toronto and not Washington D.C. Anyone who has been to either of these cities will tell you they look almost nothing alike, and the differences are sometimes painfully obvious. Next to The Whistleblower trying to convince viewers that Toronto’s City Hall is the U.N., this is the most obviously “Toronto” film in years. But I do have to give it points for one thing. Sloane uses Spadina’s venerable Gold Stone Noodle as a place for late night dinners and power lunches, and on a personal level I completely stand by her decision.

Miss Sloane opens in theatres across Canada on Friday, December 9.

Check out the trailer for Miss Sloane: