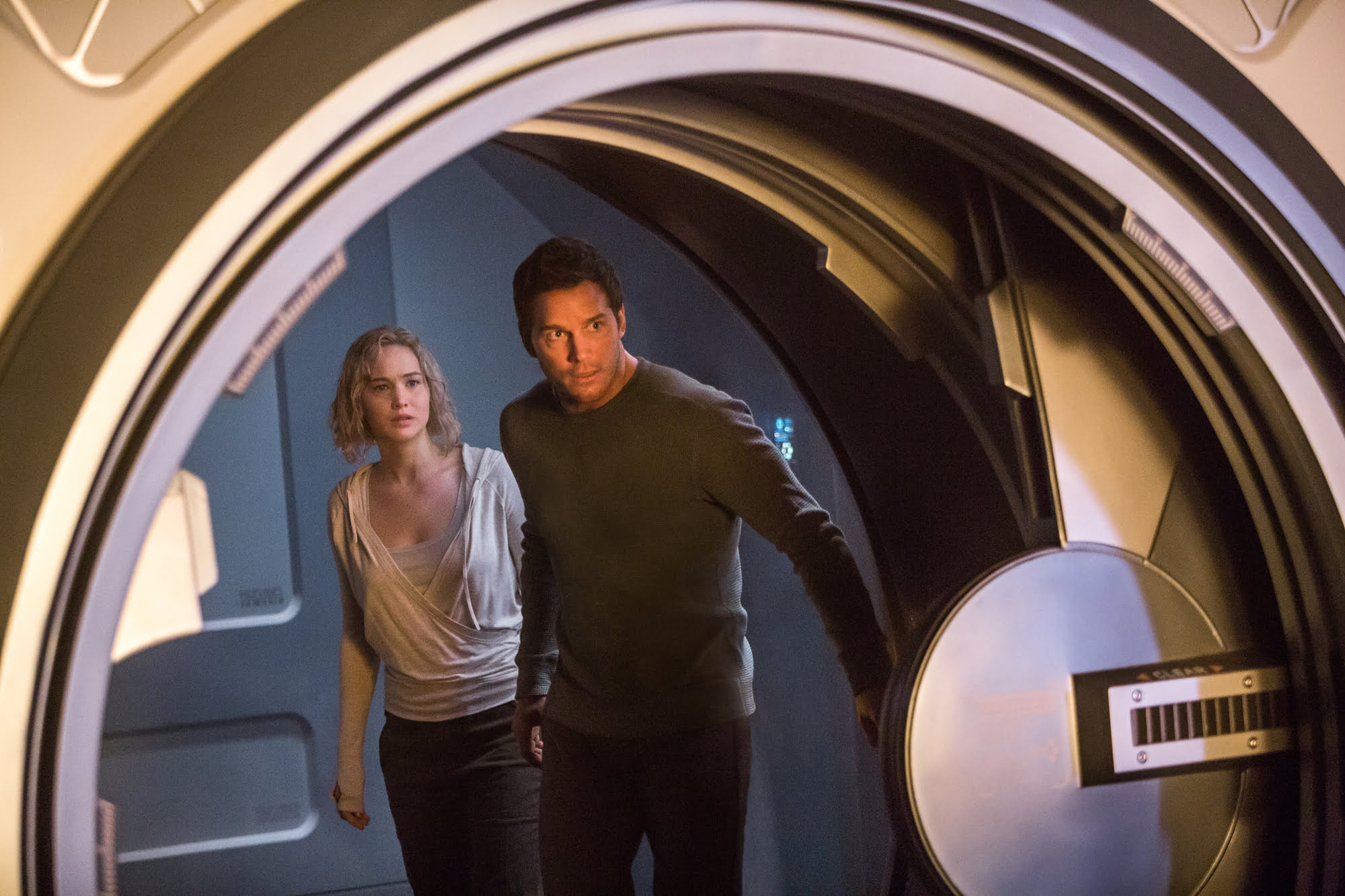 Passengers is the worst sci-fi romantic adventure to be released by a major studio around the holidays since Heartbeeps. It’s a baffling disaster where one wonders why so many talented people and so much money would be wasted on something so wrongheaded, empty, and risible. Outside of scant handful of visuals that are suitably grand and Michael Sheen cheerfully mugging his way through a supporting role as a robot bartender, there’s nothing worth commending here and plenty of condemnation to go around.

In the distant future, the passengers and crew of the Starship Avalon are en route to the soon to be colonized planet of Homestead II, a place where people are going because Earth is too crowded and too expensive. The plan immediately makes no sense because once one of the ship’s holograms states that it’s too expensive to live on Earth it’s already known that a trip aboard the Avalon is prohibitively pricey. But I digress…

It’s a journey that takes 120 years from start to finish, with all 258 crew members and 5,000 passengers hibernating for the duration of the trip, due to wake up four months before they reach their final destination to allow for ample time to wake up and acclimate themselves. Wondering how these pods stop the aging process or why beards and hair seem to only grow outside the pods instead of within them? Well, you can stop reading the rest of this review and just know that you’ll hate this film. If you like your sci-fi smart and questioning of technological limitations or moral quandaries, you’ll check out before the plot even kicks in.

I take notes during movies so I can keep everything I see straight and accurate. I average one small notebook page of notes per film. Before the plot of this hopeless tale took shape, I already had a page full of notes full of things I hoped would be answered, but none of them get remotely talked about. I ended up with three pages of notes, and most of the third page simply said, in bold letters, “I am in hell. Help me.” I think that I put more thought into watching Passengers than screenwriter Jon Spaihts (Prometheus, The Darkest Hour) did into coming up with it.

One day, a random passenger named Jim Preston (Chris Pratt) is woken up from hibernation accidentally. It’s only thirty years into the trip, and there are ninety to go. It takes over 50 years to send and get a response to earth. There’s no way to get back to sleep because the ship’s builder’s apparently never thought of anything bad happening and say that the pods are foolproof. Clearly the ship was a death trap waiting to happen, but don’t expect any questioning of corporate culture and cost cutting here. He’s the only person awake and outside of the aforementioned android barkeep. He has no companionship or any clue how to solve his predicament. He’ll be alone until he dies. He’s an unexceptional man, but apparently pretty handy when it comes to hacking robots and breaking and entering. He can’t access any area of the ship that houses anything technical, and the crew has a highly secured lockdown area where he can’t attempt to wake anyone up. Even worse, he has what amounts to a coach ticket on the ship, meaning his solitary life isn’t as comfortable as he would like.

One day in a drunken stupor he comes across the pod of Aurora Lane (Jennifer Lawrence), a vision straight out of Sleeping Beauty for lonely old Jim. She’s the daughter of a Pulitzer Prize winning author, and a writer in her own right, with the equally idiotic plan of travelling 120 years into the future to spend a year on a new planet before headed back to earth on another 120 year trip just so she can see what the REALLY distant future is like. Instead of trying to wake up anyone of substance or use his unexplained and out-of-nowhere technical skills into trying to get back to sleep or wake up someone of substance (which he COULD do since every passenger has a manifest and backstory that anyone else on the ship can watch as if they were dating videos), the nutty and companionship starved Jim wakes Aurora up on purpose, essentially murdering her while lying and saying that her early rousing was totally an accident.

Instead of a brainy sci-fi thriller about one man’s attempts to survive his futuristic Robinson Crusoe trappings in the middle of what looks like a shopping mall someone shot into space (and one curiously devoid of any scope to suggest over 5,000 people are on board since the whole film takes place in a total of nine rooms and a little bit outside the ship), Spaihts and director Morten Tyldum (The Imitation Game, Headhunters) turn Passengers into a meet-cute rom-com, where a stalker essentially tries to woo his prey and hide the fact that he has quite selfishly doomed her because he’s an idiot with no clue how to actually survive. Instead of spending his year alone coming up with a feasible plan, he decides to thaw someone out so he can have a partner to play a DDR knock-off and shoot some hoops with. He also really wants to bang her.

His plan works, at least for a little while. Tyldum, Spaihts, Lawrence, and Pratt all make a massive deal out of just how unlikely of a couple Jim and Aurora make, and the sickening, unearned, sugary nature of their relationship gets underlined right about the time they start having sex on a commissary table and Tyldum cuts to a cutesy shot of vacuuming robots valiantly trying to keep up with the mess being made on the floor. Eventually, in the film’s only truly outstanding scene, Aurora wises up to what Jim did and she reacts how most sane human beings would to such a revelation, and just as Passengers looks like it’s about to turn a corner and become somewhat morally interesting, engaging, and maybe even a bit suspenseful, that’s when everything goes horribly, irredeemably wrong. 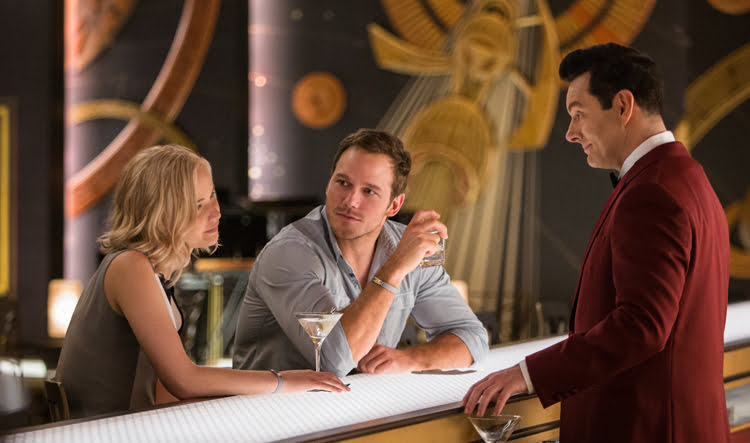 I can list plenty of things wrong with Spaihts’ screenplay, but the ultimate failure of Passengers has to be laid at the feet of Tyldum and somewhat on Lawrence and Pratt for being unquestioning enough to go along with the director’s piss poor decisions of what to do with this material. Part of me thinks that Spaihts wrote Passengers to have a dark undercurrent to it. Many scenes play out atonally, showing disconnect between what’s written and how it’s being directed and performed. I think that Spaihts, in the one thing he probably got right here, wants viewers to question Jim’s mindset and motivations, almost as if Passengers were to evolve into a sort of Pitch Black styled horror film where someone has to rely on the villain for their survival. Tyldum and Pratt in particular want none of that, preferring to show Jim as a wounded, charming man who’s trying to do his gosh-darn best under extreme circumstances, when he’s really just a complete idiot who ruins everything and sentences those he seems to love to death. Jim is so incompetent, he make’s Pratt’s character of Andy Dwyer from Parks and Recreation look like a MENSA member.

It’s also Pratt’s fault for not realizing this character should have some edge to him, and his performance borders on being legendarily misguided. Lawrence isn’t great in the film (but who could be with this material), but she has enough Oscar nominations to weather any storms in her career to this point. I have a feeling that Pratt’s hangdog expressions and falsely charming leading man bravado will have some questioning if audiences’ love affair with the actor should continue being a real thing. It’s a blandly heroic turn for any film, but delivered by way of a character that should never be seen as a romantic leading man or anything remotely heroic.

Just about the time that things look like they’re about to turn interesting, a third character briefly awakens whose sole functions are to remind Jim and Aurora that life is a beautiful thing worth fighting for and to tell them that (SURPRISE!) the ship is screwed and they need to team up to save the lives of everyone on board. The obvious twist is painted in bold letters throughout thanks to Tyldum having no clue whatsoever what subtlety is. Passengers launches headlong into one of the most insanely incompetent, illogical, and unintentionally hilarious third act action climaxes in cinematic history, building to a supposedly inspirational final scene (just before abruptly smash cutting to the credits and an Imagine Dragons song so insipid it sounds like a dying turtle trying to recreate 80s era Paul McCartney on a keyboard) so subtly stupid that I want to spoil it and talk about how it’s the icing on a cake made of pure shit. I will refrain. Some disappointments are best left experienced for maximum effect.

And yet, Passengers could have worked if it were a horror film or survival thriller. That’s not the movie that’s on screen, though. The film that emerges is an uncomfortable mess directed and performed with the maximum amount of earnestness and the least amount of thought or care. It’s a film that thinks the viewer is an idiot, incapable of complex thought or introspection. It’s a film that thinks viewers just want to watch good looking people acting attractively in well lit environments instead of anything coming close to being a rationally entertaining film. Passengers should be held up as “exhibit A” as to why modern Hollywood blockbusters have gone so resolutely downhill in quality. It proves that mainstream audiences have given up and we have reached peak idiocy as a society.

It’s a nothing film that will give viewers less than they would get out of standing in place and eating a family size bag of Cheetos while staring into space. The endorphin rush would be just the same. It’s a film that in no way improves on the experience of doing nothing at all.

Check out the trailer for Passengers: