Review: ‘Why Him?,’ starring Bryan Cranston and James Franco 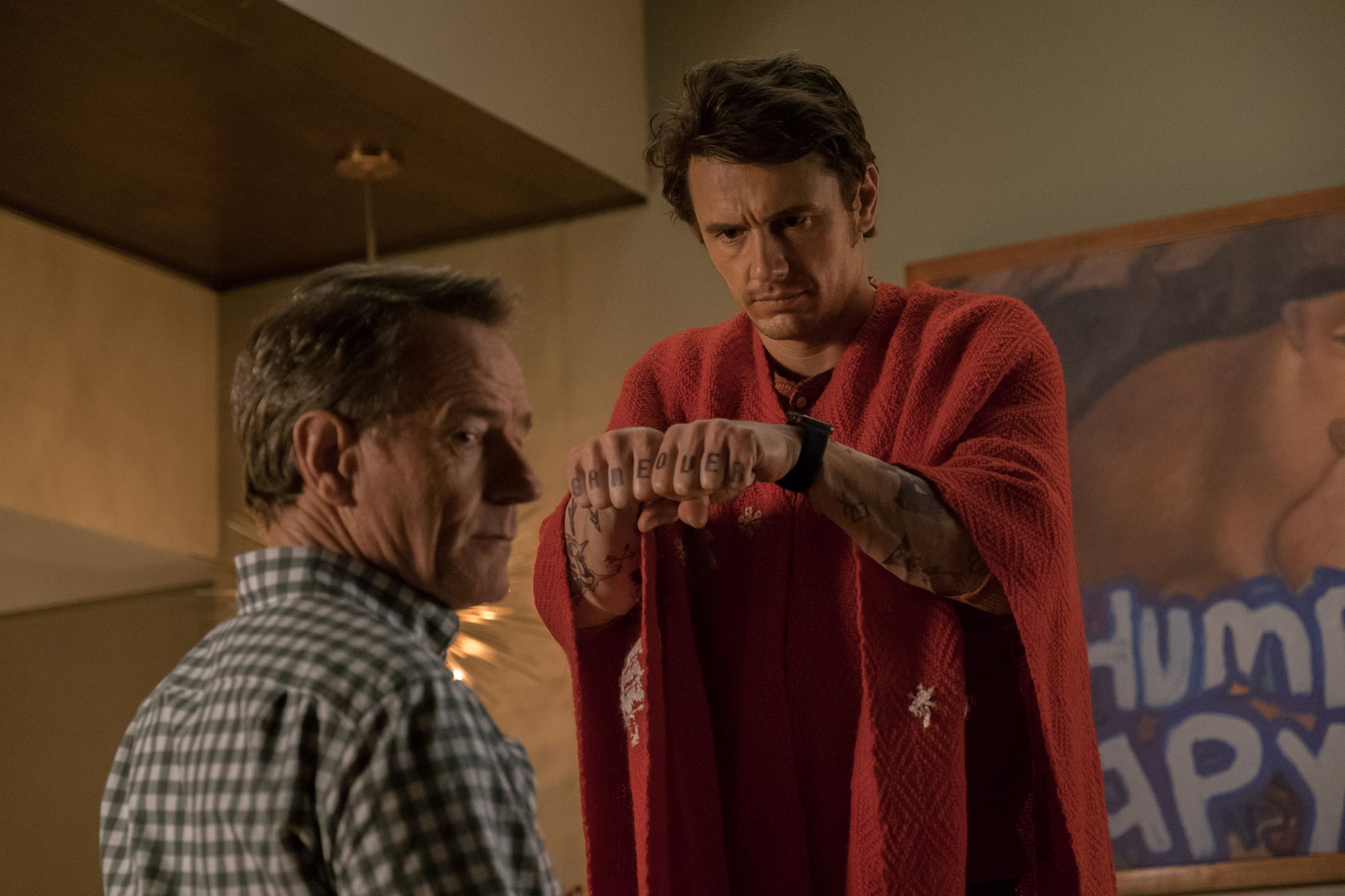 Partly a profane, raunchy comedy full of embarrassing moments for its characters and partly an earnest “getting to know the in-laws” picture, the holiday release Why Him?, starring Bryan Cranston and James Franco, is so standardized and unsurprising that the bigger question for the audience and those involved in the making of the film should have led to something titled “Why Bother?” It’s not an awful movie, and far from being a late contender for one of the worst films of 2016, but it’s clearly made for viewers that don’t give a shit what they’re watching as long as it drops some f-bombs and tries to offer up some sort of manufactured, contrived sense of emotion by way of lighthearted manipulation. As far as Christmas movies go, this one is like that dusty candy grandma has tried to pawn off on people for years. It still tastes like unexceptional candy, but something’s off about it.

Ned and Barb Flemming (Cranston and Megan Mullaley) and their teenage son Scotty (Griffin Gluck) are about to spend their first Christmas away from their home in Grand Rapids, Michigan so they can visit with their grown up daughter, Stephanie (Zoey Deutch), in Palo Alto, California and get to know her new boyfriend. Immediately upon their arrival, they notice that Stephanie’s intensely wealthy app developer beau, Laird Mayhew (Franco), is an eccentric free spirit. Heavily tattooed, cussing with every other word, and bearing nothing remotely resembling a verbal or moral filter, Laird is the exact opposite of the squared up and straight-laced Ned; right down to the fact that Ned is heavily in debt because his old school paper goods business is floundering and on the verge of bankruptcy.

Laird is all about things like openness, molecular gastronomy, modern art, living with minimal amounts of waste, and, in the film’s only good subversion of what audiences are probably expecting from such a goof, being open and honest with people about what he thinks. Ned’s all about internalizing everything, acting suspicious of kindness, afraid of the future, and staunchly against his daughter potentially walking away from her last year and a half of university to spend her days with some dirty bro ten years her senior. This is where one should say “They’re the original Odd Couple” and cue the laugh track because the shenanigan train is leaving the station.

Only the gags that arrive are already worn down to a nub. There are bits involving Japanese self-cleaning toilets, a misunderstanding of what “bukkake” means, and Scotty’s latent desire to motorboat anything with breasts that read like a dusted off primer on how to tell old people filthy jokes they’ll never understand. The plot follows suit offering up no twists that will surprise anyone above the reading level of a six year old or anyone who has ever seen a movie. Will Ned and Stephanie have a huge falling out because daddy is getting paranoid he’s losing his daughter? Will Laird eventually get Ned’s blessing to pop the question to his daughter on Christmas Day? Will Laird’s wealth help save the family business? Will an omnipresent Siri-ish device (voiced by Kaley Cuoco, referred to in the film by Laird very specifically as “The Big Bang Theory’s Kaley Cuoco”) both help and hinder everyone’s plans whenever the plot needs it to? Will everyone except Ned start to realize that Laird isn’t that bad of a guy once they get to know him? Will Ned and Barb’s love of KISS play into the story at all? Will that giant dead moose floating in a vat of its own piss in the middle of Laird’s living room function as a “hi-f**king-larious” Chekov’s gun at some point? If you answered, “Gee, I don’t know” or “I doubt it” to any of these questions, you’ve never seen a film and this one might just blow your mind. 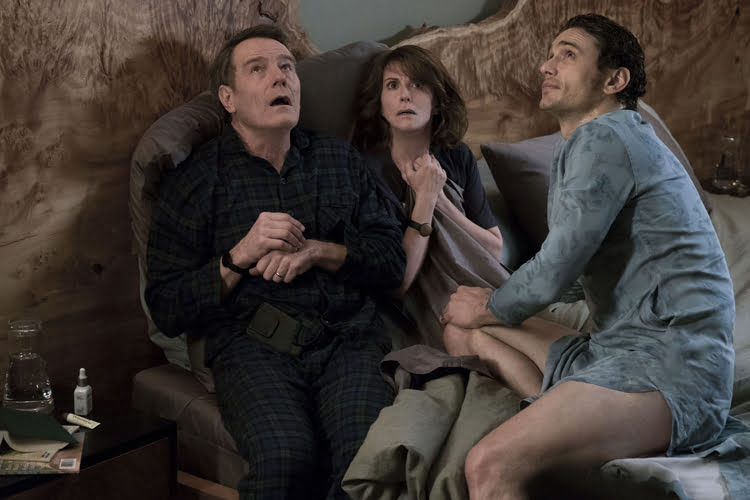 Director and co-writer John Hamburg (writer of the Meet the Parents franchise) goes for the bare minimum here, thinking that the same old, same old will leave them rolling in the aisles as long as he doesn’t screw any of it up. To his credit, he doesn’t really botch anything too horribly, aside from a few moments of choppy editing that suggest this has been pared down from a longer film than its currently overlong 115 minute run time can hold. Then again, if you try just hard enough to not fail, you’ve risked nothing and the final result will be proof of a complete lack of ambition or extra effort.

Some of the cast are trying and perhaps a bit too hard in some cases. Mullaly looks like she’s having some fun, and gets the best scene of the film, taking a stock sequence of a wasted spouse begging for sex and actually turning it into something amusing. Keegan-Michael Key shows up as Laird’s faithful assistant and steals every scene he’s in. Franco has some moments here and there where he’s quite watchable, but for the most part he’s just running roughshod over everything in an attempt to make things work. Thankfully, this never gets worse than the opening scene where Laird randomly lists off the names of Netflix shows in hopes that the titles alone will make viewers convulse with chuckles. It can be overpowering any time Franco starts throwing everything he has at the wall to make anything stick, but in something this resolutely uninspired, the effort starts to become appreciated the longer the film drags on.

Shockingly, one of the biggest problems of the film is the normally reliable Cranston. While he has played protective dads and high strung worriers in the past, he’s never played someone as conservatively straight as Ned. He proves to be surprisingly bad at it. He can’t play the straight man and elevate such lacklustre material at the same time, and to be fair, that’s a bit like asking someone to juggle chainsaws while gargling tacks. Watching him play someone devoid of any kind of wit whatsoever is curiously off-putting.

Why Him? isn’t awful, but I almost wish it were. As it stands, it’s a monument to cinematic mediocrity, and another reminder that 2016 was a year full of mainstream and indie films just like this. I actually feel bad having spent so much time writing a review of a film that most viewers will forget about ten minutes after they’ve left the theatre.

Why Him? opens in theatres everywhere on Friday, December 23.

Check out the trailer for Why Him?: