The historical drama Hidden Figures takes great liberties with its admittedly uplifting subject matter, but it’s still an admirable film that isn’t any better or worse for it. Yes, it’s about as boilerplate as these kinds of Hollywood productions tend to get, full of logical fallacies and grandstanding speeches from the heart at perfectly timed intervals, but it’s also quite charming, entertaining and boasts an important message that could inspire future generations to do the great things that we’ve taken for granted for far too long. I don’t love Hidden Figures, but I love that it bothers to stand for something instead of lingering in empty sentiment.

In the early 1960s, the United States found itself facing two issues that would forever change the course of the nation’s history: the space race and the civil rights movement, and the second feature from filmmaker Theodore Melfi (St. Vincent) examines a key moment where both overlapped. Following the launch of Sputnik into space by the dreaded Russians, the engineers, scientists, astronauts, pilots, and mathematicians at NASA are working overtime to try and keep up. The moon landing is still a ways off. They still need to get someone into space before they make that “one small step for man and one giant leap for mankind.”

Hidden Figures shifts the focus from the usually celebrated astronauts and top brass and to some of the more unsung heroes at the government run aerospace behemoth in Langley, Virginia: members of the “computer pool,” a team of intelligent, predominantly coloured women who would be loaned out to various departments strictly for the purposes of performing calculations wherever needed. They’re on the verge of becoming obsolete thanks to the arrival of an enormous IBM machine (that, in one of the film’s best running gags, no one knows how to use or install yet), but at this crucial point in the nation’s history, their contributions are invaluable.

The script from Melfi and Alison Schroeder (adapted from the book by author and academic Margot Lee Shetterly) reduces a rather large department to the stories of three black women and friends. The ostensible lead of the group is Katherine Johnson, played by Taraji P. Henson, finally gets a leading role in a film that’s truly worthy of her talents. Katherine is a brilliant mathematician and single mother bogged down in a system that sees nothing but the colour of her skin, but she’s given an enormous opportunity to show her skills working for the demanding, but compassionate Al Harrison (Kevin Costner) and the brilliant, but somewhat bigoted Paul Stafford (Jim Parsons) as they try to figure out their spacecraft’s trajectory using math that probably hasn’t been invented yet.

Then there’s Dorothy Vaughn (Octavia Spencer), the de facto supervisor of the “computer” department who isn’t making what a supervisor should make. She looks to be the only person competent and intelligent enough to help NASA transition from human calculators to the IBM machine, but she’s constantly running afoul of her blatantly racist and arrogant superior (Kirsten Dunst, so evil you can practically see her growing a moustache she can twirl). There’s also the story of Mary Jackson (Janelle Monae, who between this and Moonlight will hopefully have a long acting career), a woman of equal intelligence to Katherine who dreams of joining NASA’s engineering program, but thanks to racism and tacked on prerequisites to get into classes she’s already overqualified for finds herself jumping through hoops.

There are little bits of fat on the story to Hidden Figures that could be trimmed and dramatic contrivances so convenient and well timed that they border on becoming laughable, some of which are problematic. While Spencer’s character does just fine without a male figure front and centre in her life, Henson and Monae both get saddled with romantic partners that do nothing to propel the film along. Katherine continues a flirtation with a kindly national guardsman (Mahershala Ali, wasted here), while Mary constantly battles with her proud, borderline militant husband (Aldis Hodge), who thinks that trying to impress “the man” is another form of oppression. Spencer and Monae’s roles are already underwritten and given less screen time as it stands, so tacking on more dudes to a film about women feels like the wrong approach. 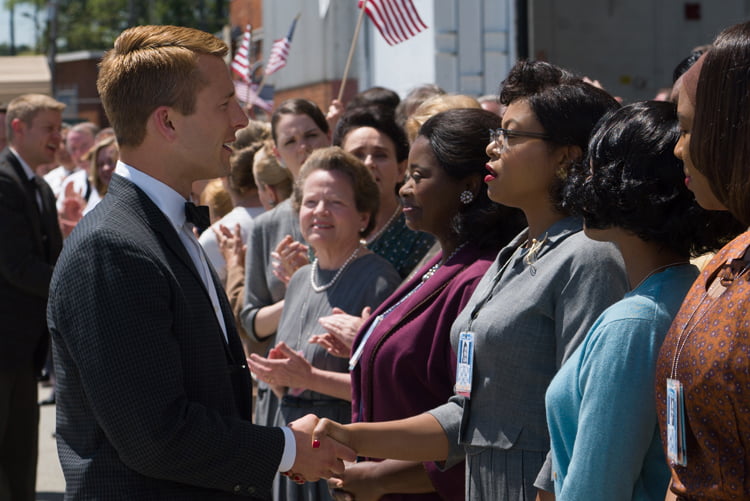 It’s also kind of unnerving that the only real villains here are “society at large,” a white woman, whoever built the coloured restrooms in an inconvenient location, and Parson’s inconsistently written nerd, and that Costner’s commander comes across as one of the most level headed people to ever live. Despite pointedly critiquing American racism in the 1960s, Hidden Figures seems curiously blunted; like it’s letting a lot of people off the hook in an effort to bring in the widest audience possible. It’s a film about revolutionary feats that’s not particularly revolutionary in execution. There isn’t a truly daring bone in this film’s construction. It’s played as safely as one can play a film about racism. I was truly left wondering what a female – or more importantly a black female – director could have done with this material and what it would have felt like.

The one thing that Melfi captures perfectly here is a sense of America’s war between two fears at a historically fascinating and troublesome point in the history of the country. What is the average American more afraid of: black people getting equal rights or a Communist invasion? This question is consistently on the periphery of the film, and it subtly informs how the characters interact with one another. It’s the one thing in the film that’s perfectly drawn out without being explicitly referenced by anyone.

Also, outside of the great work being put in by the cast, I find it really hard to hate on any film that wants to encourage women and people of colour into taking up science and math. It’s harder and harder to get young people excited about sciences these days, and Hidden Figures captures a time when the contributions of individuals really mattered. It might be playing fast and loose with specifics and an overall timeline of events, but Hidden Figures wants to encourage, not discourage. As such, I feel obliged to follow its lead on this one. I have problems with the execution, but I would like to encourage more people to try their hand at things that scare them or they feel inadequate doing. The days of a single person making a difference hasn’t passed us by, and Hidden Figures could serve as a nice reminder of a nice sentiment.

Hidden Figures opens exclusively in Toronto at Cineplex Varsity and VIP Cinemas on Sunday, December 25. It expands to other cities nationwide on Friday, January 6.

Check out the trailer for Hidden Figures: