Review: ‘The Bye Bye Man,’ a film by Stacy Title

Hi. If you’re reading this it means you’re at least giving this review of The Bye Bye Man some sort of cursory glance for actual content, and you didn’t just give it a quick scan to see how many stars it got before navigating away from the page. While I have you here, dear reader, please indulge me for just a few moments longer.

Let me explain to you all that The Bye Bye Man is not an excellent movie. It’s not even a good one. It’s part of a dying breed of B-movie that doesn’t get made anymore. Director Stacy Title (best known for the 1995 cult classic The Last Supper) and screenwriter/frequent collaborator Jonathan Penner have made a movie gleefully out of step with current convention, and something that’s fully commits to a goofy premise. I can’t remember the last time I saw a film like this try to set up a slasher movie franchise in such a way (and the Saw films really don’t count), and while I could pick the film apart for a plethora of plot holes, cheesy jump scares, and a lot of developments that don’t make a lick of logical sense, I don’t really want to.

The three star rating that you see here is the result of a film that I would give six stars if I could based on sheer, visceral entertainment value, but only two stars in terms of actual filmmaking quality. I pretty sure that Title and Penner know exactly the kind of film that they were making, and might even be flattered by such a statement once I start explaining what I mean by that. This is the first film since the early 90s that I can say approximated the feeling of hanging out with a bunch of my (then teenage) friends in someone’s basement and watching a silly, but effective enough horror flick from the 80s on VHS. I mean that as an earnest compliment.

While I was only spooked part of the time (mostly during the film’s climax), my heart actually filled up while watching The Bye Bye Man instead of sinking when I watch so many of today’s more sadistic, callous, and empty commercialized horror films. I laughed quite heartily at The Bye Bye Man, and I feel like a great deal of it was intentionally planned that way. I have no idea if there’s even an audience for this kind of horror movie anymore, but it feels like it was made to appeal to my own weird kind of sensibilities and almost no one else. At any rate, good or bad, I had more fun at The Bye Bye Man than I did watching at least half a dozen other films that I had to watch this week with more reputable pedigrees.

The Bye Bye Man leaves no cliché unturned in its purposefully simplistic narrative. Three university roommates in Wisconsin – Elliot (Douglas Smith), his girlfriend Sasha (Cressida Bonas), and his lifelong best friend John (Lucien Laviscount) – want to leave the dorm life behind and decide to pool their money together and rent a fixer upper property with a hidden past. One night, Elliot discovers that a nightstand left behind by the previous owners of the home contains a secret, crazy looking message inside. It turns out that their home used to belong to a newspaper reporter (Leigh Wannell) who went crazy in the 1960s investigating murders that people tried pinning on the titular boogeyman. If you don’t speak, write, or think about this ghoul’s name, he can’t hurt you, but since Elliot opened the door for his return, things start to get very bad for the trio of friends and their psychic acquaintance, Kim (Jenna Kanell). The Bye Bye Man (played by Doug Jones) and his trusty hell-hound start playing mind games with the three of them. Elliot gets paranoid. Sasha gets sick. John gets aggressive. It’s all in a bid to get them to say his name to someone else and pass it along to new victims. I think. Probably. 90% sure that’s the point of this.

The playfulness of this overstuffed narrative homage is played straight, but also dances on the fine lines of satire and parody. Title and Penner are dropping so many clues and red herrings about the origins and inner workings of the trenchcoat wearing spectre that it’s impossible even know to discern which are important and which aren’t. It would all be rather confusing if Title didn’t make the correct decision to start the movie off cranked to eleven, excise anything that felt like it would slow the movie down, and never looked back. If nothing else, The Bye Bye Man is more stylish than any of the films it wants to emulate or subvert, and there’s never a dull moment. Something is always happening in every scene. As a haunted house styled thrill ride, it delivers in every respect. There’s literally no time to be confused by any of this. 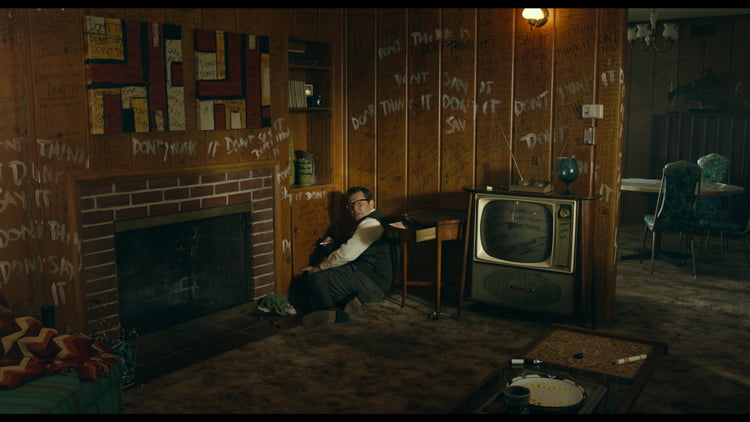 It’s also overqualified in every respect. In addition to Whannell hamming it up in flashbacks, the cast knows exactly the kind of film they signed up for. Smith particularly seems to be giving everything he has to his bug eyed, sleep deprived main character. The supporting cast includes a game Carrie Anne Moss channelling John Saxon as a detective who seems to hate teenagers, and Faye Dunaway (!) as the gun toting, doom saying widow of Whannell’s journalist. The cinematography from James Kneist is polished. The musical score from The Newton Brothers matches the film’s manic energy perfectly.

Of course, none of this is particularly original or novel. The Bye Bye Man comes cobbled together out of the spare parts of A Nightmare on Elm Street, It Follows, Pontypool, The Ring, The Grudge, Terror Train, The Blair Witch Project, and even the Harry Potter franchise, but it’s done out of love and without any degree of guile, cynicism, or callousness. It’s not a “nice” movie, and the conclusion is pretty dour in tone, but I feel like this was constructed with genuine aims to see if anyone would be interested in a new B-grade slasher franchise in this current cinematic economy. Considering that the Reagan era was a heyday for this sort of filmmaking, it should stand to reason that it could make a comeback in the days of a Trump presidency. Some might think of it as a step back, but to some degree I think such films are a reflection of the climate they’ve been made in; offering a strange kind of catharsis and a mirror to hold up to society.

It’s also a film that includes a jump scare where someone throws a Nerf football at an oncoming windshield, a bunch of things about gold coins and trains that killed a family that are never explained, a sassy black librarian (wonderfully and warmly played by Cleo King), a really left field reference to All That Jazz that actually works, a concerned older brother character (Michael Trucco) with a small, potentially endangered daughter (Erica Tremblay, little sister of Jacob) who seems on hand only for a sequel, a cameo from Penner as a mysterious florist (!!!) whose name is literally Mr. Daizy, and some of the most (unintentionally?) amusing hallucination sequences since the Nightmare on Elm Street sequels.

The Bye Bye Man is not a film to be taken too seriously, and I’m not even sure I want to see another one of these. I almost don’t want any of what’s left dangling here explained to me. They don’t make them like this anymore, and there are plenty of reasons as to why that is. Still, as a brief return to this kind of craziness, I’ll take it. The Bye Bye Man is a work of schlock that knows it’s a work of schlock, and in its own choppy way, it’s admirably seamless. It’s not a good or even fully coherent film. It’s certainly not an unwatchable film. It did have me smiling from ear to ear, though. I never expected to see a movie like this again in my lifetime, and I truly thank Title and Penner for making it happen. Your enjoyment of it might vary based on your taste in horror movies, but for me, The Bye Bye Man hit a sweet spot that I never expected would be hit again.

The Bye Bye Man is now in theatres everywhere.

Check out the trailer for The Bye Bye Man: