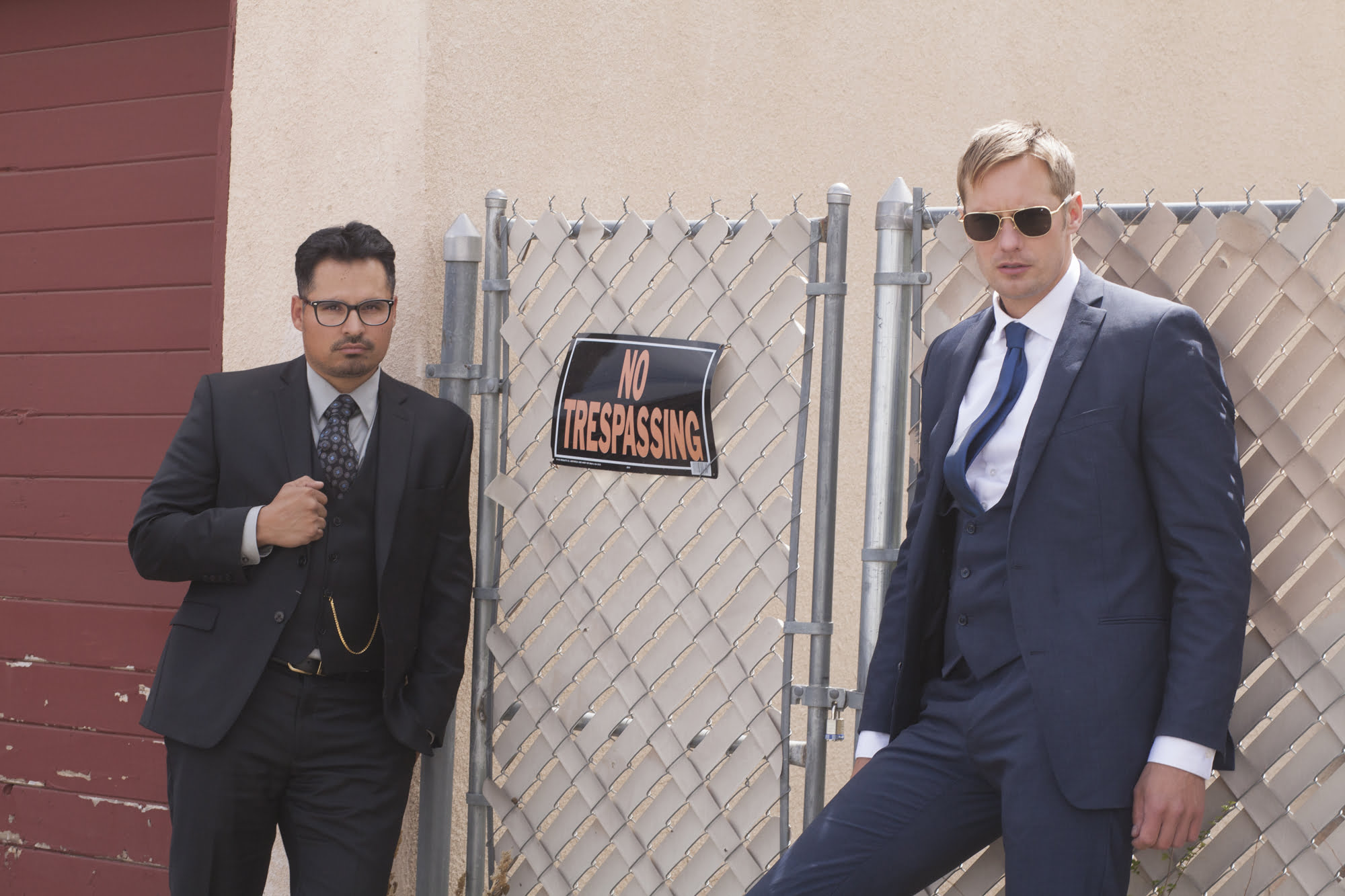 Rooting for the bad guys in a film isn’t a new idea, but filmmaker John Michael McDonagh takes that sentiment to new heights with his latest dark comedy War on Everyone, available on iTunes and select VOD providers today after screening at the Toronto After Dark Film Festival last fall. The critically acclaimed writer-director, who previously delivered The Guard (the highest grossing independently produced film in Ireland) and Calvary, spins a tale of a couple of amoral cops who stumble upon an evil plot constructed by two even more abhorrently evil bad guys.

The “heroes” of the film are the imposing, hard drinking, in-your-face, loner of few words Terry (played by Alexander Skarsgård, getting a chance to put his underused comedic chops to the ultimate test) and testy family man Bob (Michael Peña, who has a talent for comedy that’s perpetually underrated). They’re renegade cops and partners in New Mexico who continually cause their boss (Paul Reiser) no shortage of headaches and grief, and between their drug and alcohol fuelled outbursts, they attempt to get involved with a million dollar heist. Things get complicated when some bodies turn up (that they didn’t create because they’ll gleefully administer brutal beatings, but never kill people) and their inside snitch (Malcolm Barrett) skips town. It turns out that they’ve been double crossed by a dandy British criminal mastermind (Theo James, brilliantly working against type) and his Bowie-like, strip club owning, porn producing right-hand-man (Caleb Landry Jones, stealing every scene in a film full of scene stealers).

War on Everyone is a highly entertaining, gleefully offensive and subversive comedy that blends the best of McDonagh’s dark sensibilities with classic American cop movie tropes. We chatted with McDonagh via email about the film’s unique sense of humour, why he doesn’t allow anyone to censor him, the chemistry between his stars, and why it’s important to create original action sequences.

War on Everyone isn’t the first film that you’ve written and directed that has a less than straight-laced police officer at the centre of the film, but unlike The Guard this film has a uniquely North American sort of sensibility. The sense of humour in War on Everyone taps into a kind of American boorishness that feels different from your previous films, and you pull it off wonderfully. Was it a conscious decision to create an American story with this one or did it come about gradually throughout the process?

John Michael McDonagh: It was a gradual process. Originally, the story was set in London, but it never felt right. It was only when I reworked it for New Mexico that the narrative started to slot into place. As regards “American boorishness”, I find that to be in the DNA of so many US cop films and TV shows, without that boorishness ever being recognised as such by the writers and directors. With War on Everyone it’s right up front.

When we think about the “crooked American cop” stereotype that’s been depicted on screen hundreds of times before, I don’t think people necessarily think of characters like Terry and Bob. We first see them as gleefully amoral people, but they’re always guided by their conscience throughout and even at their worst. Even in the ways that they carry themselves – with Terry often acting without any sort of filter and Bob balancing his vices with his status as a family man – these aren’t characters that you expect to get from a film like War on Everyone. I know that you like to work independently on your films and without studio involvement, but was there ever a time or a fear where you thought these characters would be in danger of becoming compromised in the hands of the wrong producers? How protective of Bob and Terry were you?

John Michael McDonagh: No, the financiers and the producers were very hands-off. I was basically allowed to run amok. I wasn’t censored in any way, nor would I have allowed myself to be. As for Terry and Bob, these are two very bad men who ultimately do one good thing. They’re still bad men, though, and it feels like a number of critics have misunderstood this, as if I am somehow implying that they have become saintly heroes by the end of the film. 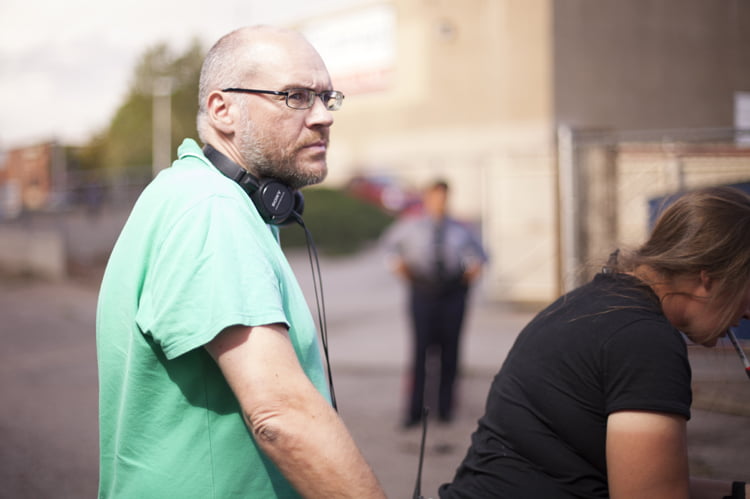 The chemistry between Alexander and Michael is outstanding. Did each of them come to the project with their own ideas on how to portray Terry and Bob or did they hone their comedic timing with one another as they started to get comfortable with one another? And did they bring traits and tics to the characters that weren’t originally in the script?

John Michael McDonagh: We had a few days of rehearsal before shooting where Alexander and Michael got to know each other and became comfortable with each other. The great chemistry they have on screen is a result of that, I guess, but a lot of it is pure luck.

Alexander brought to the table Terry’s unique physicality where he’s almost hunched over in many of the scenes. Michael was more interested in Bob’s appearance – his glasses, his suit, his fob-watch, his kimono. He said he studied me a lot, too, but I don’t see it.

I’ve known for quite some time that Michael is exceptionally underrated as a comedic talent (especially in something like Observe and Report, which I think is one of the best black comedies of the century so far), but not many people look to Alexander as a comedic talent, and yet, he’s also a perfect fit for a slightly off, strong/silent type. What was it about his screen presence that made you want to cast him in such a different role than audiences are used to seeing him in?

John Michael McDonagh: I agree with you about Observe and Report – it was Michael’s performance in that film that made me want to work with him, rather than his more dramatic roles. He’s also very funny in Eastbound and Down. I wanted Alexander as much for his physicality as anything else – he looks like he can actually beat the shit out of you, and I needed that for Terry otherwise his and Bob’s intimidation tactics wouldn’t be believable.

Sort of building off that question, it’s great to see Theo James (someone with a great, dry sense of humour in the few times I have met him) be able to sink his teeth into a villainous role. What I love about James Mangan and Caleb Landry Jones’ Birdwell is that they’re villains that are even more amoral than the already dodgy heroes are. Usually in films like this, dodgy heroes are set against villains that live by some sort of code or have more refined motivations. Was it important for you to break the mold that most crooked cop films have been built from by making the bad guys infinitely more loathsome than the leads?

John Michael McDonagh: Yeah it had to be that way to give Terry and Bob any kind of moral imperative for the final shootout. I was taking a big risk with revealing just how loathsome Mangan and Birdwell actually are – for some people it’s a beat too far, but I just didn’t give a fuck about playing it safe on this movie. Theo is great. There’s a tendency among actors to try to match another actor who’s being completely wild (and Caleb is wild), but Theo has the confidence to underplay, which I found really interesting. He also had no qualms about playing someone who is unrelentingly evil, and not in a comic book way.

The action beats in War on Everyone also have a lot of detail to them, and I always love to see that in a film because it makes the excitement feel earned and purposeful instead of tossed off. There’s not a ton of huge action scenes in War on Everyone, but the ones that happen here count. For you, when you’re staging an action sequence or a fight or a shootout, how do you balance the moving parts of pulling off the scene on a technical level with balancing what you know you want the story to tell?

John Michael McDonagh: The main thing for me was to try to keep those sequences as original as possible: to smash the car straight into the strip-club before the audience even has enough time to realise what’s about to happen; to break up a foot chase with a Mariachi band who don’t even react as the bullets are flying around them; [SPOILER ALERT] to have Bob and Terry shoot first in the final confrontation and then finish off the villains in cold blood.

Technically, with those action beats, you’re only as good as your preparation (I storyboarded everything) and the team you’ve assembled, and on War on Everyone I had a great stunt supervisor, Josh Kemble, and his stunt team, and the terrific Bobby Bukowski as cinematographer.  Have to admit, though, that shot that begins the attack at the strip club, where the camera flips upside-down, we stole from Hawaii Five-O.

War on Everyone is now available on iTunes and select VOD providers.