The Great Wall is the most expensive Chinese produced motion picture ever made, and at least half the time that budget shows. The other half is a less than seamless special effects extravaganza that can’t keep any plot elements straight for more than ten minutes at a time. On the whole, it’s a relatively amiable bit of entertainment that’s probably about as good as the core B-movie premise will allow, but with that low of a bar it’s hard to justify anyone spending this much money to make the thing with an A-list international cast and one of the world’s greatest and most mythologized man made landmarks as a focal point.

Set at some indeterminate point in Chinese “history,” The Great Wall follows William (Matt Damon) and Tovar (Pedro Pascal), leaders of a band of multinational western mercenaries travelling to China in search of gunpowder. They don’t find gunpowder, but they do have a run in with an unknown monstrous, violent creature. Interested in finding out what it was they just killed/what just tried to kill them, William and Tovar’s journey leads them to the base of the Great Wall of China, where the decorated and esteemed Soldiers of the Nameless Order – protectors of the wall and the rest of China – see the mercenaries as unwanted nuisances who can’t be released from custody in a bid to protect the secret reasons why the wall exists. William learns that the troops, led by the fearless and strong willed Commander Lin Mae (Tian Jing),General Shao (Hanyu Zhang), and Strategist Wang (a thoroughly misused Andy Lau), are gearing up to fend off a siege of hiveminded monsters known as the Tao Tei. These beasts, which are guided by their queen and voracious greed, are apparently blinded by a magnetic rock that William and Tovar had in their possession. William finds himself intrigued and invested in the fight of the Chinese people, learning to fight alongside Lin Mae. Tovar, on the other hand, remains firmly focused on finding out where the troops have stashed the gunpowder and escaping to riches with Ballard (Willem Dafoe, reduced to the level of a walking plot device), a fellow western mercenary who has been a captive of the Order for twenty-five years.

I can’t confirm if this is true or not and my research as of press time hit a bit of a dead end, but it feels like the North American version of The Great Wall has been tweaked to better suit the tastes of Western audiences, which is funny if true because it’s a Chinese produced film resolutely made for Western audiences. The running time of what I saw tonight was considerably shorter than I was led to believe it was going in (listed at 103 minutes, but clocking in at just barely 90) so it wouldn’t surprise me if, like many films of this nature, there’s a different cut that can be viewed in China than there is in North America. With a star like Damon at the head of the cast, I guess that makes sense, but the final results of what I saw are choppy in ways that seem almost illogical to me. Some scenes would start and end seemingly at random (a friendship between William and a lowly, but brave cook starts to take shape, but never gets developed beyond a couple of lines of mostly meaningless dialogue), while bits involving Ballard and Tovar seem to have been shoehorned in as concessions to western audiences that might be getting antsy watching Asian people. Some scenes don’t need to be there, and others (even some action sequences) could do with more explain. One scene where Lau’s strategist tells a room full of people how the monsters have been breeching the wall involves Dafoe talking over all the characters and translating into English so subtitles aren’t necessary, when clearly this scene should have just been handled by the perfectly capable Lau. It feels like an alternate version of a perfectly workable scene that’s in there so North Americans don’t have to read too many subtitles. 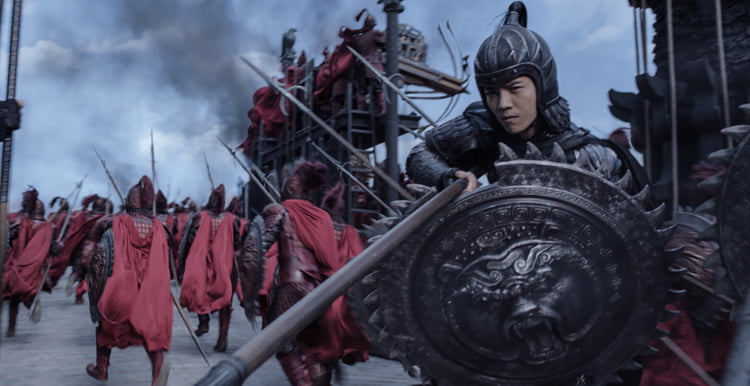 At least the claims levied against The Great Wall that it somehow whitewashes history aren’t particularly well founded. It’s certainly an often groan-worthy white saviour narrative, but it’s not rewriting history and it certainly isn’t a dangerous or reckless film. It’s fairly stupid, half-baked fantasy fodder, and it isn’t a story about the building of one of China’s greatest landmarks. Also, Damon’s character (who speaks with an ill advised Gaelic accent that comes and goes) isn’t made out to be Chinese. In no way is The Great Wall true to any sort of history or pre-existing myth, so it just ends up being an unfortunate example of a callous blockbuster with international crossover appeal at the box office. With the exception of Damon’s curious soul who learns every noble thought he has from Chinese people, the rest of the non-Asians are thoroughly loathsome human beings, and in a bit of propaganda that the modern Chinese government will be proud of, the villainous hordes symbolically represent almost every other kind of outside interest. It’s a mixed metaphor, to be clear, but it’s not a whitewashed one. It’s also so concerned with being called “whitewashed” that it has calculatingly included a Hispanic sidekick for William’s suddenly woke hero, as if including a different minority would somehow equate to a missing part for another Asian actor and an even bigger global box office take.

While The Great Wall hasn’t had the entirety of its A-list Asian cast shifted to the side, the story has been crafted to appeal to as wide a swath of humanity as possible. A good reason for this would be because the six writers on the project (three who get screenplay credit, three who get story credit) are all non-Asian writers, including frequent Jason Bourne adaptor Tony Gilroy, World War Z novelist Max Brooks, renowned director Edward Zwick, and frequent Zwick collaborator Marshall Herskovitz. So any real claims to a uniquely Asian identity went out the window before a second of footage had even been shot, and The Great Wall certainly feels every bit the same kind of spectacle heavy, substance light Americanized blockbuster ever made. It’s also often as threadbare and jumpy as a story made by six cooks working independently in the same kitchen would come across.

At least the director of the project is Chinese and a good filmmaker to boot. Zhang Yimou is the auteur responsible for such memorable blends of action, myth, and light history as Hero and House of Flying Daggers. The Great Wall isn’t nearly up to the level of his Chinese output, but Yimou knows how to competently make this scattershot, hodgepodge script work. The quality of the action sequence range from dazzling (especially the climax, which includes a battle atop a kaleidoscopic tower) to piss poor (the opening skirmish, marred by horrid editing), but in terms of production design, cinematography, and overall pacing, Yimou has done a fine job. For someone normally seen as an honest artist, Yimou’s involvement with such a cash grab could be seen as selling out, but I can’t knock him for it. The product being delivered is wonky to begin with, but Yimou has found a way to suitably elevate it almost to a point of respectability.

The best thing that I can say about The Great Wall is that it’s watchable in the moment, and the worst is that it’s completely forgettable. It’s competently made, but also made by people who have memorized a playbook to a point where the whole thing feels like an epic produced on autopilot. It isn’t challenging, but it’s fun. It’s problematic, but in ways one might not have expected going in. It’s better than most critics would have expected following the almost outright drubbing it received upon release in China late last year, but nowhere near as a good as a film with this much talent in front of and behind the camera should be. It’s a film that’s more interesting to talk about than it is to watch, but even then the conversations around it can only go so far before they get boring. It’s as epic of a shrug-worthy film as we’re likely to get this year.

The Great Wall opens in theatres everywhere on Friday, February 17.

Check out the trailer for The Great Wall: