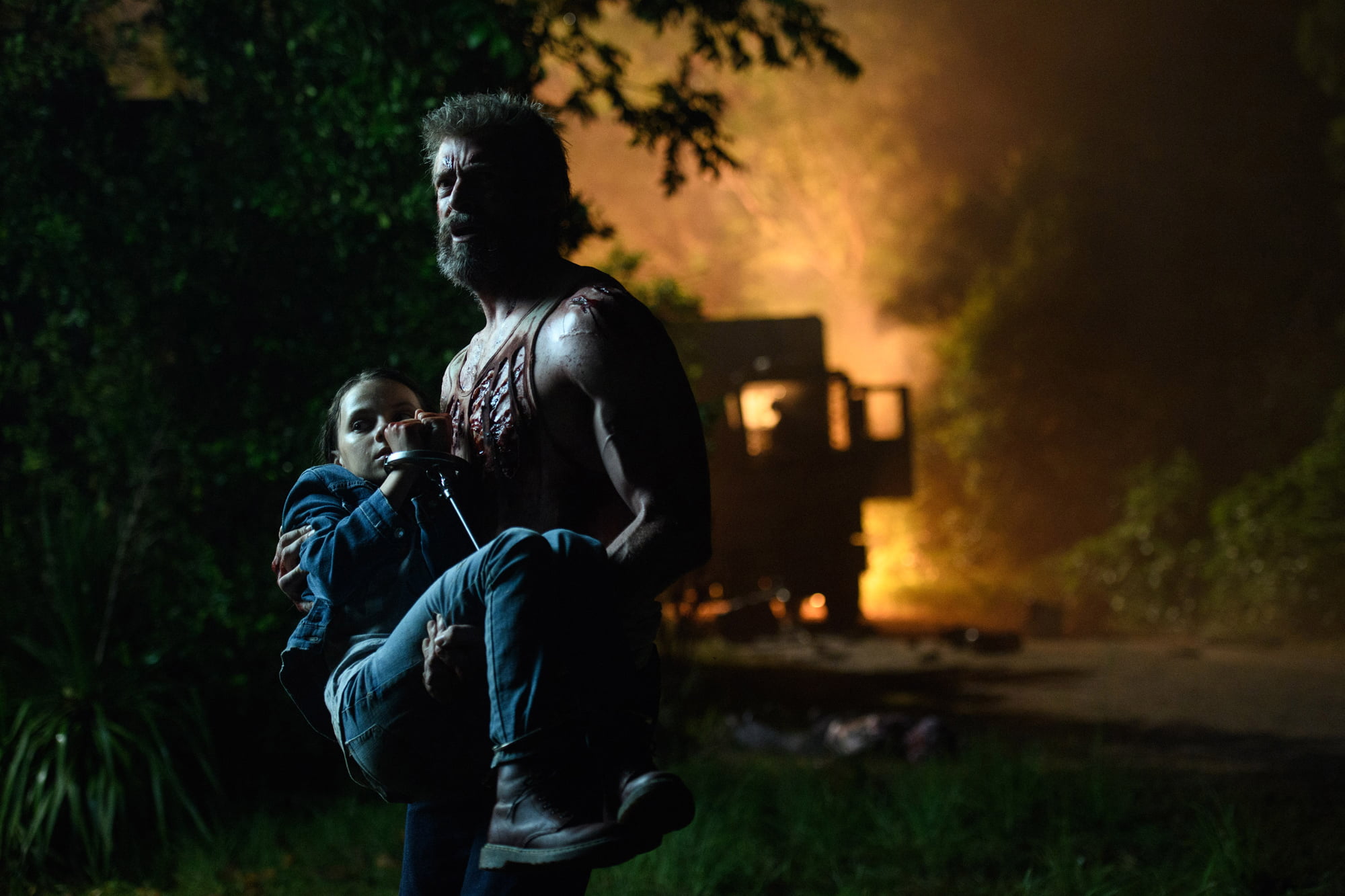 An ultraviolent, but suitable presumed send-off for Hugh Jackman’s portrayal of Wolverine, Logan tries to once again differentiate itself from the franchise it spawned from and similarly ends up with mixed results. It’s a purposefully bleak, borderline unentertaining motion picture where there’s likely more to say about the gore and political leanings of the material than there is about the actual story. It has a lot of good ideas, but no concrete plans on how they’re all supposed to be used. It’s sloppy, but watchable, so it’s basically in line with about 80% of the films to have sprung from X-Men characters.

Logan is set in the semi-futuristic world of 2029; about a decade after almost all traces of mutants have been wiped from the United States thanks to a shadowy Homeland Security like government organization. As far as anyone knows, no mutants have been born in over twenty-five years. Logan (Hugh Jackman) has left his Wolverine days far behind him, and he’s as cantankerous and moody as ever.  He’s hiding out in El Paso, Texas as a limo driver, barely keeping his alcoholism in check and suffering from the effects of some unseen degenerative disease that has made him rusty when it comes to defending himself. He’s also hiding and caring for senile and feeble nonagenarian Charles Xavier (Patrick Stewart). Charles now spends his days locked away in a giant metal tank somewhere in Mexico because he barely remembers anything about his past life (or has been repressing some big mistakes), and he has seizures so severe that they cause his powerful brain to overreact and nearly kill everyone around him. To say that these characters have seen better days would be an understatement, and Logan has never been the best at caring for others. Thankfully, they’re assisted by Caliban (Stephen Merchant), an albino mutant and former government snitch with mutant tracking abilities that’s also keen on staying out of the public eye.

The story gets off to a pretty quick start. Director and co-writer James Mangold (Walk the Line, The Wolverine, 3:10 to Yuma) doesn’t recap anything for the uninitiated or try to explain the intervening years for Logan. The setup gives a hint of the relentlessly sombre and depressing tone to follow, and after an opening scene where Logan gruesomely slices and dices his way through a bunch of car thieves, Mangold lets it be known that anything resembling a sanitization of a character with razor sharp claws has been thrown out the window, which is great since the only thing that hampered Jackman and Mangold’s previous franchise partnership on The Wolverine (which is still superior to Logan in many ways) suffered from a sense of people being told to hold back. In the early going, Logan creates a unique and contemplative vibe that shows some promise, but unfortunately doesn’t last very long. The reflective angst doesn’t stick around, but the depressing tone will definitely persist.

From there, Logan is drawn back into his more heroic ways because Charles insists he has been getting visions of a new mutant for the first time in years, and a mysterious woman (Elizabeth Rodriguez) has been tracking Logan and offering large sums of money to help protect her daughter, Laura (Dafne Keen). A group of bounty hunters – led by the bionic armed Pierce (Boyd Holbrook) – working on behalf of a nefarious multinational corporation headed up by the evil Dr. Rice (Richard E. Grant) want to take Laura for reasons that should be obvious to everyone, but Logan doesn’t want to believe. Eventually, Logan is more or less forced into protecting Laura and they’re forced to go on the run with Charles in tow, looking for a sanctuary along the Canadian border that might not be real.

There aren’t a ton of action beats along Logan’s road trip, but the handful that do happen are brutal, shocking, and often heart-sinkingly depressing. There are lots of people getting sliced, diced, decapitated, skull crushed, and eviscerated, but little of it is shot by Mangold in such a way that it looks like giddy fun. In these violent moments, Logan proves to be a film that wants to have its cake and eat it, too; almost as if it has been written by a reasonably smart 16 year old who still finds a false equivalency between cartoonishly horrific violence and maturity, and one is not a signifier of the other. The only truly “adult” thing about this comic book film aimed at an older crowd are some bloody outbursts, a lot of shoehorned curse words, and one of the most gratuitous and unnecessary bits of female nudity in recent memory. To think that this is any way an “adult” film is somewhat delusional. It’s assuredly aimed at teens with parents willing to take them to R-Rated fare.

Another impediment to taking Logan seriously is a batch of sometimes laughably comedic contrivances designed to move the plot along. All of Laura’s backstory is filled in via a filmmaking trick so hackneyed that it begs to be retired: the “if you’re watching this, I must be dead” video that’s housed on a cell phone, yet seems to have been shot with several different cameras (within a facility that can’t logically explain how someone can sneak a camera in) and edited to perfectly to fill in any and all story gaps. Then there’s the matter of Charles’ senility, which gets turned on and off whenever the screenwriters and Mangold feel there hasn’t been an action sequence in a while or whenever they write themselves into a corner and they suddenly need the old man to get them out of a jam. And this says nothing about a plot that relies on suggesting that these characters metatextually live in a world where X-Men comics exist without questioning how this is possible, how it came about, or how the unseen comic scribes are connected to the former heroes. If a film is going to stake their intellectual claims on a bunch of plot points that are patently stupid to think about, I’m not going to take it as seriously as the filmmakers clearly want me to. 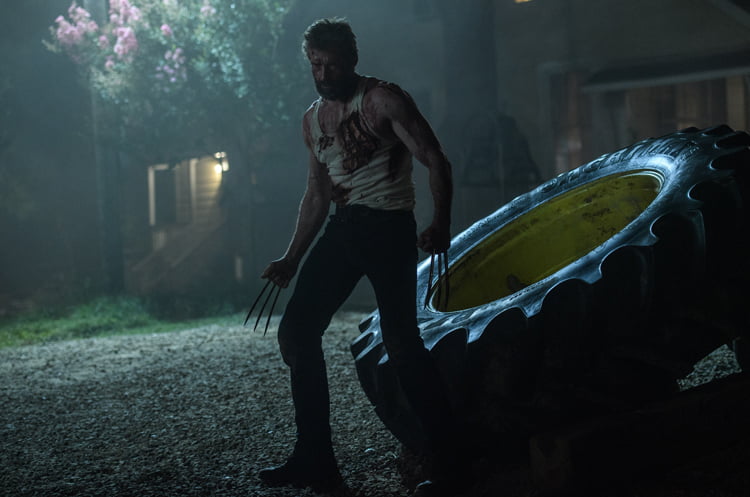 But while I don’t take Logan as seriously as some seem to be, I can say that I found myself reasonably engaged by what unfolds. Jackman gives his best, most nuanced performance as Logan, and that it’s hard not to be drawn into his work. There’s an energy to Jackman here that suggest this is exactly how he hoped for the character to go out, and he can claim more authorial credit here than anyone behind the camera can. And while I can’t say that I find the idea of Logan protecting a feral child (another cinematic cliché that I can’t take seriously as it’s presented to me thanks to inconsistencies and conveniences within that character), the crises faced by Jackman, Stewart (also great at delivering his swan song here), and Merchant can be quite moving thanks to the actors imbuing their characters with unenviable sadness and pathos. These are men who know they’re living on borrowed time already, and none seem too keen on prolonging their suffering much further, at times almost existentially questioning why they don’t just end it all for themselves. Outside of the slick visuals, well rendered effects, and a stunt team that’s earning every cent of their paycheques, the cast emerges as the biggest reason to see Logan.

It’s also interesting to note that while Logan was in production long before Donald Trump was elected president of the United States, the film unconsciously boasts a strong bias against the current administration that the material lends itself quite naturally to. While the actual plot is underwhelming, the details of the storyline that centre around a government that relies heavily on corporations and big business to do their dirty work for them are the only truly frightening moments of the film that aren’t played for shock value. There’s a lot to be said here about immigration, racial profiling, the repression of the honest working class, and why young people are more and more choosing to leave America once their schooling has completed. The societal messages contained within Logan are never preachy or harped upon, but subtly important to consider when looking at the film as a whole. I wish these messages were in service of an overall more tightly constructed film, but the fact that anyone here is thinking about anything deeper is worth commending.

Logan feels like a film that always takes two steps forward and one step back from start to finish. Such math rightfully suggests, however, that ultimately Logan comes out ahead in the end. By the end of the brutal climax (meant to emulate beloved gunslinger oater Shane, which is referenced throughout), it feels like a story arc decades in the making has finally reached a natural end point. It’s a bittersweet and hopeful point that sends the film out on a graceful note that make Logan worth sitting through. Still, I can’t shake this feeling that I should have felt more at the end of this instead of a somewhat apathetic feeling that I saw a decent movie that I doubt I would want to sit through a second time. Not every last ride for a character in what’s ostensibly a western has to come to a crowd pleasing conclusion, but it also shouldn’t feel entirely inevitable. I can still recommend it, but I would tell people to temper their anticipation for Logan with more reasonable expectations.

Check out the trailer for Logan: