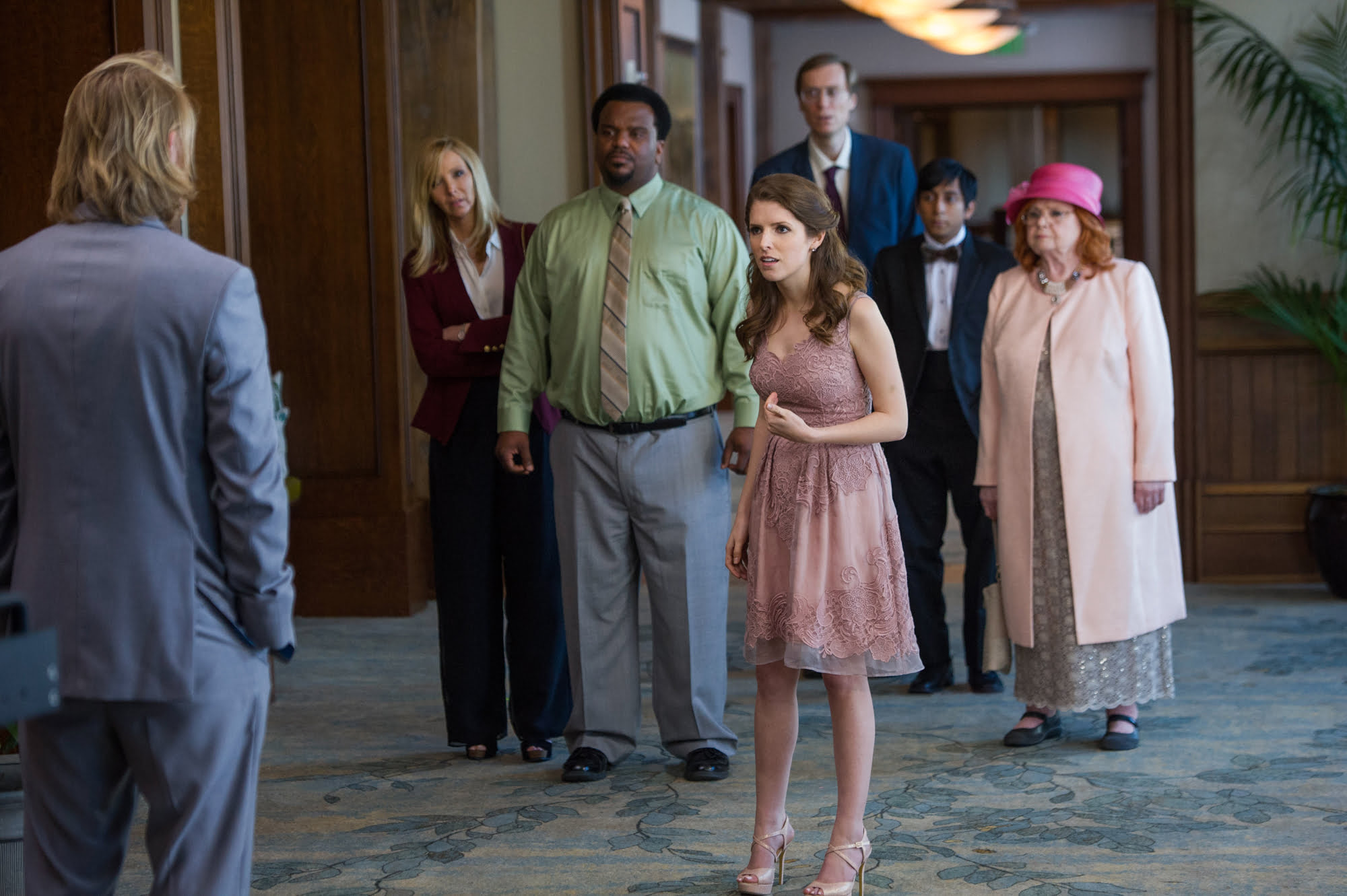 I’m sure at one point the well cast ensemble comedy Table 19 showed a lot more potential on the page than the final results suggest. It’s the kind of film where immediately one can tell there’s a disconnect between the script, the performances, and the direction, suggesting that while the results are entertaining at times, no one was on the same page.

It’s a great set-up for a low key ensemble comedy. After going back and forth in her mind about going to the wedding of her ex-boyfriend’s sister – where she was once intended to be the Maid of Honor – Eloise (Anna Kendrick) finally decides to RSVP as attending. She was dumped by the bride’s brother (Wyatt Russell) two months prior via text message for reasons neither of them seem to keen about coming clear on, both to each other and to their mutual friends. Having lost her position of status at the reception, Eloise gets relegated to a fate worse than the singles’ table. She’s sat with “the people who should have known to RSVP with regards, but showed up anyway.” This motley crew includes a bickering pair of married diner owners (Craig Robinson and Lisa Kudrow), the bride’s former nanny (June Squibb), a horny young man (Tony Revolori) egged on by his mom to go to the wedding so he can get laid, and a creepy, lanky, awkward man (Stephen Merchant) who unbeknownst to everyone else at the table has just been released from prison.

Table 19 has a premise that sounds more like the foundation for an acting class improv game than a feature film, but the script comes written in part by mumblecore veterans Jay and Mark Duplass (Cyrus, Jeff, Who Lives at Home), who excel at creating nuanced, low key, character based comedies and dramas from similarly simplistic premises. For the longest time during the production of Table 19, they were credited as the screenwriters, but in the credits of the finished film, they have curiously had their titles bumped down to story credit only. The cast of capable, recognizable performers is made up mostly of people who understand and excel at precisely those kinds of comedies. Unfortunately, I get the feeling that at some point Table 19 was given to some executives who wanted to turn it all into a less subtle, more crowd pleasing comedy with tearjerking undertones. Everything that works about Table 19 feels natural and like it could happen in real life, but those moments are often running aground of ludicrously contrived beats that feel tacked on and make little sense.

Director and the now sole credited screenwriter Jeffery Blitz (Spellbound, Rocket Science) doesn’t seem to share the same restrained sensibilities as the writers given story credits, and it seems like he’s the problem here. Instead of placing the focus on how these people deal with being unwanted guests at a joyous occasion, Blitz can’t resist the temptation to go bigger, grander, and more manipulative without being any more funny or moving. Instead of things naturally progressing, each escalating sequence of Table 19 reeks of effort, not on the part of the cast, but on the part of a now overwritten and overwrought script trying to contain everything. I’m just speculating that this is what happened with Table 19, and maybe the Duplass Brothers turned in a bad script that needed some work, but anyone familiar with their work (as the cast clearly is) can almost pinpoint where their sensibilities and ways with characters end and someone else’s ideas take over. 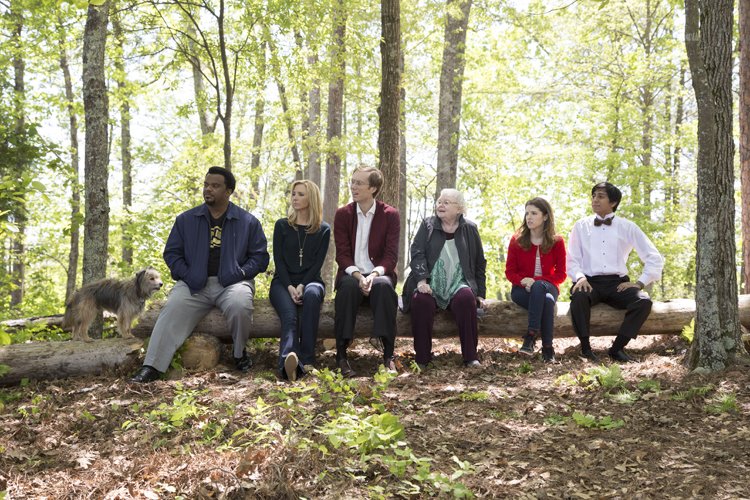 Kendrick, Robinson, Kudrow, and Russell are more or less playing characters I would expect to see in a Duplass film. While I don’t think that Robinson, Kudrow, and Russell really had their roles messed with – all of them emerging as the best things about the film – Kendrick struggles by having to be the anchor for every subplot that feels tacked on. She has to start a brief flirtation with a mysterious wedding guest she’s never met (Thomas Cocquerel, playing a character so thin it exists only for a twist so obvious it might as well have a neon sign hanging over him) and she has to bond with Squibb’s tragic, world weary, pot smoking nanny. The best thing I can say about Kendrick’s performance and the way the character is written is that she has great chemistry with Russell, and both of them are made to look like jerks in equal measure. The film’s refusal to choose a side between the ex-lovers is its only truly solid grace note.

Squibb is also good, and considering that there’s a scene where the members of the misfit table abscond to her room to smoke her weed stash, I’m guessing she was probably in the original version since such a sequence where people just blaze and bullshit is firmly in the Duplass wheelhouse, but eventually the role was rewritten to have a sort of fairy-godmother/doomed authority figure arc from any number of hack rom-coms.

I can’t quite pin down what Merchant is doing or what brought him to the production, but that actually fits the character nicely, and the man can simply get a laugh out of me by walking down a corridor wearing women’s pants that are too short for his enormous frame. The mysterious wedding guest adds nothing, but Revolori adds even less. It’s not his fault his character sucks, but it feels like he was trucked in from a John Hughes film circa 1985. This character has so little bearing on anything that happens that some scenes involving everyone at the table find ways to actively place him elsewhere. That’s how little the filmmakers know about what to do with him.

Blitz, who hasn’t delivered a feature film since 2007, relies heavily on his sitcom background here, showing no discernible sense of style or pacing. The emphasis isn’t place on quiet character moments or letting the actors develop their performances naturally – save for one tender moment between Kudrow and Robinson that’s one of the high points – but instead on pratfalls, slapstick, and salty jokes that would barely register at a comedy club amateur night. Again, I have no idea what went wrong behind the scenes while constructing this, but Blitz’s inability to competently keep his film under control certainly doesn’t help matters.

You might ask why I am theorizing at great length about the kind of film Table 19 could have been, and the answer is simple. Wondering what could have been and what could have gone so disastrously wrong with such a chip-shot premise was the only thing getting me through the film other than my good will towards the cast. It’s a sloppy mess of a film with a handful of chuckles and some good performances, but nothing that can remotely be recommended about it on the whole. You can almost see what would draw so many talented people to the material, and all you can do is wonder how it went astray.

Check out the trailer for Table 19: