Review: ‘The Fate of the Furious,’ starring Vin Diesel and Dwayne Johnson

I quite like almost all of the other films in the meatheaded Fast and the Furious franchise, but it pains me to say that for the first time since the fourth entry in the series tried to take things in a new direction, the series eight installment, The Fate of the Furious, left me completely bored throughout much of its running time. It also left me baffled and more than a little upset that such a fun and goofy series about the “importance of family” and “living life a quarter mile at a time” would suddenly forget everything that made these likably silly bits of entertaining in the first place and instead doubles down on the kind of nasty disaster porn and sadism that’s more evocative of a Transformers film than a Fast and the Furious film. It’s one of only two films in the franchise that I had precious little enjoyment watching, and overall the entry that made me feel the least amount of good will towards it. Considering that the franchise is coming of a string of three exceptionally entertaining entries that helped make it the biggest non-superhero franchise in the world, that marked drop in quality equates to driving off a cliff at full speed.

Expert street-racer and master criminal Dominic Toretto (Vin Diesel) has been keeping a secret that he never knew he was keeping from his merry band of world saving crooks, and it’s about to come back and bite him in the ass. A mysterious, deranged cyberterrorist, Cipher (Charlize Theron), exposes this secret and uses it as leverage to get Dom to turn his back on those he loves and help her steal weaponry that would allow her to essentially start World War III (as though aren’t there already). Cop turned accomplice Hobbs (Dwayne Johnson), gadget guru Tej (Ludacris), motormouth Roman (Tyrese Gibson), computer mastermind Ramsey (Nathalie Emmanuel), and the love of Dom’s life, Letty (Michelle Rodriguez), not only have to try and stop Dom from helping to destroy the world, but figure out why he would betray them in the first place. Their only chance of stopping their former family member: to team up with the only person other than Hobbs to successfully track Dom down, the nefarious Deckard Shaw (Jason Statham).

It’s not the overall plot or concept of The Fate of the Furious that’s the problem here. It’s a suitably goofy jumping off point for frequent series scribe Chris Morgan to jump off from. It’s not that new franchise director F. Gary Gray (Friday, The Negotiator, Straight Outta Compton) doesn’t know his way around a dazzling large scale action sequence, but he also certainly doesn’t clear the high bars set by Justin Lin and James Wan in the previous installments. The problem here is that for the first time, there’s a Fast and the Furious film that doesn’t know if it wants to be taken seriously or not, idling in neutral at top speed through tonal shifts and twists that feel poorly thought out instead of properly executed.

Although the recent Fast and the Furious films have been elaborate affairs in terms of how the ludicrous action sequences are created, what made them so enjoyable were even simpler pleasures. It was a story of people who looked like they had fun being around each other even in the toughest of times and despite personality clashes. They would chat with hardboiled, overwritten dialogue where they spell out their feelings. The stunts themselves could defy any number of scientific laws and principals, but they came at such a relentless pace and with reckless abandon to a point where they made viewers feel exhausted in a good way. There was always a sense that the franchise couldn’t top itself, and somehow against all odds the cast and filmmakers usually found a way.

Such a pace brings unreasonable expectations and a low degree of sustainability over time, and Morgan’s tank seems to have officially run dry when it comes to stories for these characters. Gray, a fine director on most days, also feels too conventional of a choice for a franchise built on lunacy. With the exception of the film’s final twenty minutes (most of which is the centrepiece of the film’s trailer, ruining any sense of surprise), a prison fight where Statham and Johnson have to battle their way out of maximum security, and a head scratching bit involving the hacking of self driving cars in New York City that make no sense at all, Gray seems disinterested in the theatricality of the franchise, and shows reverence for Morgan’s words instead. This is a massive miscalculation. 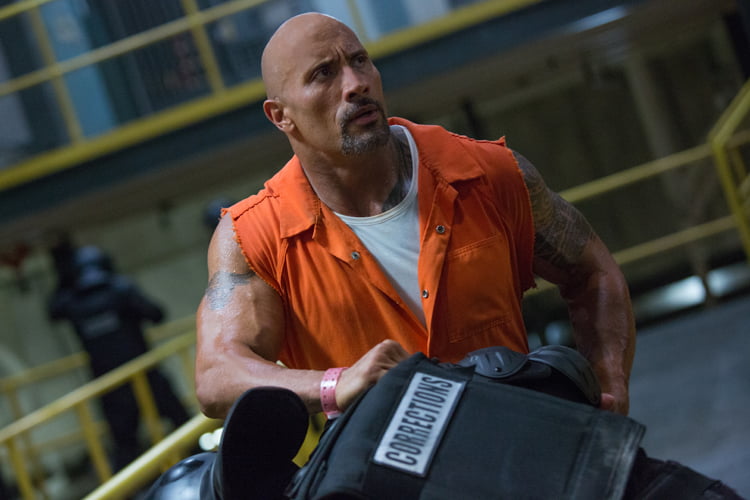 The Fate of the Furious is the worst kind of potboiler. It’s a goofy movie with a villain too sadistic to feel fun. Even worse, Cipher is the one thing most screenwriting professors would tell you not to write as your sadistic villain: a computer hacker that almost never leaves their bunker or gets involved with the action. Theron is terrible here, but it’s not her fault. It’s entirely in how her character is depicted by Morgan. She’s forced into playing a stock villain who speaks in nothing but whisper-shouted philosophical riddles, and looks and moves almost exactly like Angeline Jolie in Hackers. At times she’s depicted as a greedy genius, others as a goof who can’t realize her plan sucks, and sometimes as an outright Hannibal Lecter type. It’s no wonder she can’t get a handle on this role and settles for doing a poor Angelina Jolie impersonation.

Worst of all, Cipher is a villain that spends 90% of the film behind a headset and computer. You know what I DON’T want to see in a film about supped-up super-cars saving the world? Endless scenes of people typing on keyboards and explaining to me what they’re doing. It’s one of the dullest things in any film, but for The Fate of the Furious to waste so much energy on such lame sequences feels like a baffling misunderstanding of why people watch these films in the first place.

Well, that any having Cipher brutally murder a major character in a nasty way and then barely making anything of it, with Gray quickly cutting to a minute of goofy levity from Tyrese that makes an impactful moment hit with the power of a wet fart in a pool. In a franchise that recently suffered the tragic loss of one of its major stars, the big death in this film (and indeed why it happens in the first place) feels careless, cynical, and tossed off. There are many things I could call these films, but cynical wasn’t a word I would use until now. There are only fleeting moments here and there that feel like a Fast and the Furious film at their best. It mostly feels like a Michael Bay film instead of a self-aware bit of fun, and Gray is no Michael Bay.

Also, everyone, with the exception of Statham who rises above everything with charm, wit, and physicality, seems misused. Johnson has a few moments where he gets to showcase his charisma, but unless he’s acting opposite Statham or Kurt Russell (returning as a government spook, and reduced here to only popping up when exposition is needed), he seems checked out. Diesel tries to look tortured, and instead looks constipated. Everyone else is pretty much lost amid a sea of computer keyboard clacking and occasional car crashes.

The Fate of the Furious is a mess, but ultimately nothing the franchise can’t come back from. Far too often I was questioning why this film wasn’t fun in comparison to the three previous entries, ad ultimately why I was watching this entry and not re-watching one of the better films in the series. It was a bummer, but not an irredeemable bummer. The final twenty minutes and Statham’s stealing of the entire show are almost worth the price of admission alone, but the rest of the film is something most of the other Fast and the Furious films are not: an underbaked slog.

The Fate of the Furious opens in theatres everywhere on Friday, April 14, 2017.

Check out the trailer for The Fate of the Furious: