Review: ‘Boston,’ a documentary about the Boston Marathon

Filmmaker Jon Dunham’s Boston takes a warm and comprehensive look at the history of the most prestigious marathon race in the world. For over a whopping 120 years now, the Boston Marathon, conceived by the Boston Athletic Association, has become the most important, prestigious, and recognized distance running event in the sporting world, and Dunham gives the race its proper, respectful cinematic due. It’s a classical kind of talking heads documentary that traces the Boston Marathon’s past and present, but most importantly it should appeal well beyond a core demographic of running enthusiasts.

Documentarian and cinematographer Dunham is himself a 25 time marathon finisher, and Boston marks his third and final film in a trilogy of works about famous running competitions around the world (Chicago and Rome being the other two previously covered). With Boston, he has a lot more to work with and a lot more to chew on. He joins the fabled marathon in 2014, one year after the tragic finish line bombing caused the race to be cut short for thousands of runners, and as fears started to build about the future of the yearly Patriot’s Day event. He could have made a film simply around the marathon committee’s struggles to soldier on after such an unimaginable incident, but he instead cuts back and forth between preparations for the 2014 race and an overarching view of other high and low points in the history of the race.

The history of Boston, as narrated throughout by one of Massachusetts’ favourite native sons, Matt Damon, begins long before the 26.2 mile course began running through 8 cities and towns. Dunham goes back to the very early beginnings in 1897, where fifteen men ran on dirty, muddy tracks in the days before proper running shoes were invented. Dunham looks at how Boston not only became a local institution, but also a challenging course that made the best runners in the world come back year after year and as long as they physically could. There’s talk of some of the race’s most storied runners, like the prolific Johnny Kelley, the first true female runner in Boston Marathon history, Katherine Switzer, and Ibrahim Hussein, the runner who kicked off an era of Kenyan and Ethiopian dominance on the male side of the marathon. And yes, there’s an entire section about the infamous, still baffling 1980 Rosie Ruiz scandal, which remains one of the most infamous cases of cheating in sports history. 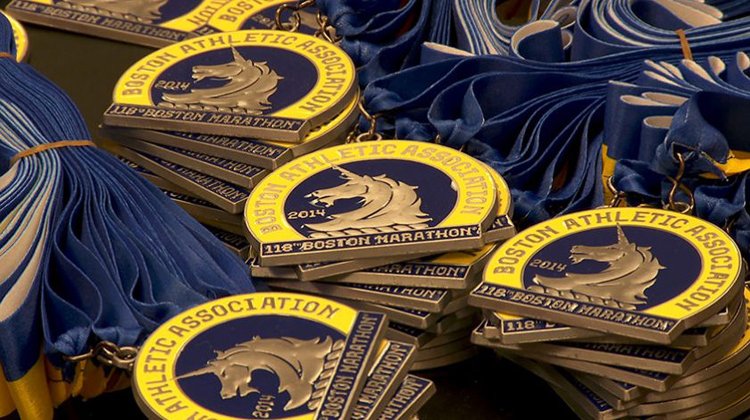 Dunham looks back at every aspect of the race’s history, no matter how briefly, making sure to include everything he possibly can to make Boston more than a film about a race that’s trying to overcome the biggest tragedy in its century long lifespan. It’s never in doubt that the film is building towards what we already know was a triumphant year for the marathon (and the first race since 1983 to have an American winner), but Dunham merely uses the 2014 running as a backdrop for a greater sense of history.

In terms of style, it’s effective and down to Earth. Outside of Damon’s narration – which is used sparingly but to great effect when needed – Dunham lets those who know the marathon the best tell their own stories. Boston contains recent interviews from anyone notable involved with the marathon’s past and is willing to talk on camera about it. In doing so, Dunham reminds viewers that the Boston Marathon has always been about the people and always will be about the people.

Boston screens at select Cineplex theatres on Monday, May 15 and Sunday, May 21st.

Check out the trailer for Boston: