Actor and filmmaker Vincent Perez’s third directorial feature Alone in Berlin boasts heavyweight performers Emma Thompson, Brendan Gleeson, and Daniel Brühl in starring roles that on paper seem worthy of their immense talents, but instead saddles them in an underwhelming, competently mounted reflection on loss and grief during wartime. Alone in Berlin could have been an impassioned drama, but instead errs on the side of curious stoicism, and ends up coming across at best as a decent episode of Masterpiece Theatre.

That last bit is a shame because Perez has some great material with Alone in Berlin. Adapted from a 1947 novel by Hans Fallada that was originally based on a true story, Perez’s film casts Thompson and Gleeson as Anna and Otto Quangel, a working class married couple in early 1940s Berlin. The film joins them shortly after the Nazis have claimed victory over the French, and the Quangels have learned that their only son has been killed in battle. Otto, an already skeptical factory foreman, begins handwriting postcard sized screeds of anti-fascist propaganda for unsuspecting citizens to discover. Anna, an equally skeptical member of the Nazi Women’s League, acts as his accomplice. The SS gets wind of the Quangel’s treasonous leaflets and force a put-upon, bullied police inspector (Brühl) on the case.

Perez’s extensive performing background means he trusts in his actors to make the right decisions, and his screenplay, co-written by collaborators Achim and Bettine von Borries, is about as straightforward as these kinds of sombre, old school epics come. Alone in Berlin takes a restrained look at a quiet, personal form of social activism, and war as something that takes more than it gives. War strips away humanity, reason, charity, and compassion and takes with it sons, limbs, money, and comfort. As unassuming and standardized as Alone in Berlin ultimately is, Perez should be commended for never losing this thread throughout. 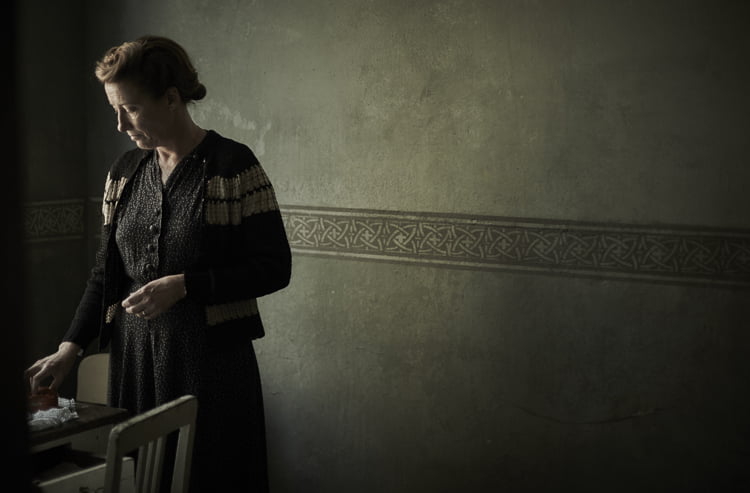 Despite a certain level of artistic focus, Alone in Berlin has nothing new or original to add to this specific genre of human drama. It’s the kind of film where every location looks like a freshly painted studio back-lot or soundstage. It takes place in Berlin, and yet everyone speaks perfect English, but at least here most non-German members of the cast are attempting a credible accent. Composer Alexandre Deplat delivers exactly the kind of musical score that’s typical of much of his work these days. Most scenes run less than a minute long either out of a misguided sense of pacing or a need to keep the production moving along due to budgetary constraints. Something this tragic shouldn’t look this polished and neatly wrapped, but this kind of filmmaking has been employed for years, and Perez can’t entirely be faulted for falling back on conventions if that’s the style he’s most comfortable with. He’s not doing anything wrong as a filmmaker on a technical level, but the approach feels workman-like in its execution.

The film also doesn’t give Thompson and Gleeson much to work with. Otto and Anna are humble people of few words and subtle emotions, and while Thompson gets allowed a few moments to raise her voice in frustration, Gleeson remains stoic throughout. The passion of their endeavours never fully grips the viewer, not only because these characters hold their feelings necessarily close to their chests, but because the audience doesn’t know these people outside of their grief. If we don’t see them in happier times or at least have anecdotes where people are allowed to crack a smile, the suffering of the Quangels seems too all encompassing to register. The dial is turned so far back on these characters in the miserable direction that only the nobility of their acts can garner any true empathy for them. Thompson and Gleeson remain two of the most watchable performers on the planet throughout Alone in Berlin, but not even they can make these characters roar to necessary life with what they’ve been given.

Alone in Berlin is appropriately dour, but never poetic and always straightforward. It’s like someone adapted the British wartime philosophy of keeping a stiff upper lip and adapted that for Nazi run Germany. Given the actions of the Quangels and their obviously emotional motivations, that strikes as an oddly off-putting choice. These curiously polished choices make one wish Perez’s film turned out better than it ultimately did.

Alone in Berlin opens at Cineplex Varsity Cinemas in Toronto, Mayfair Theatre in Ottawa, and The Vic in Victoria, B.C. on Friday, May 12, 2017.

Check out the trailer for Alone in Berlin: