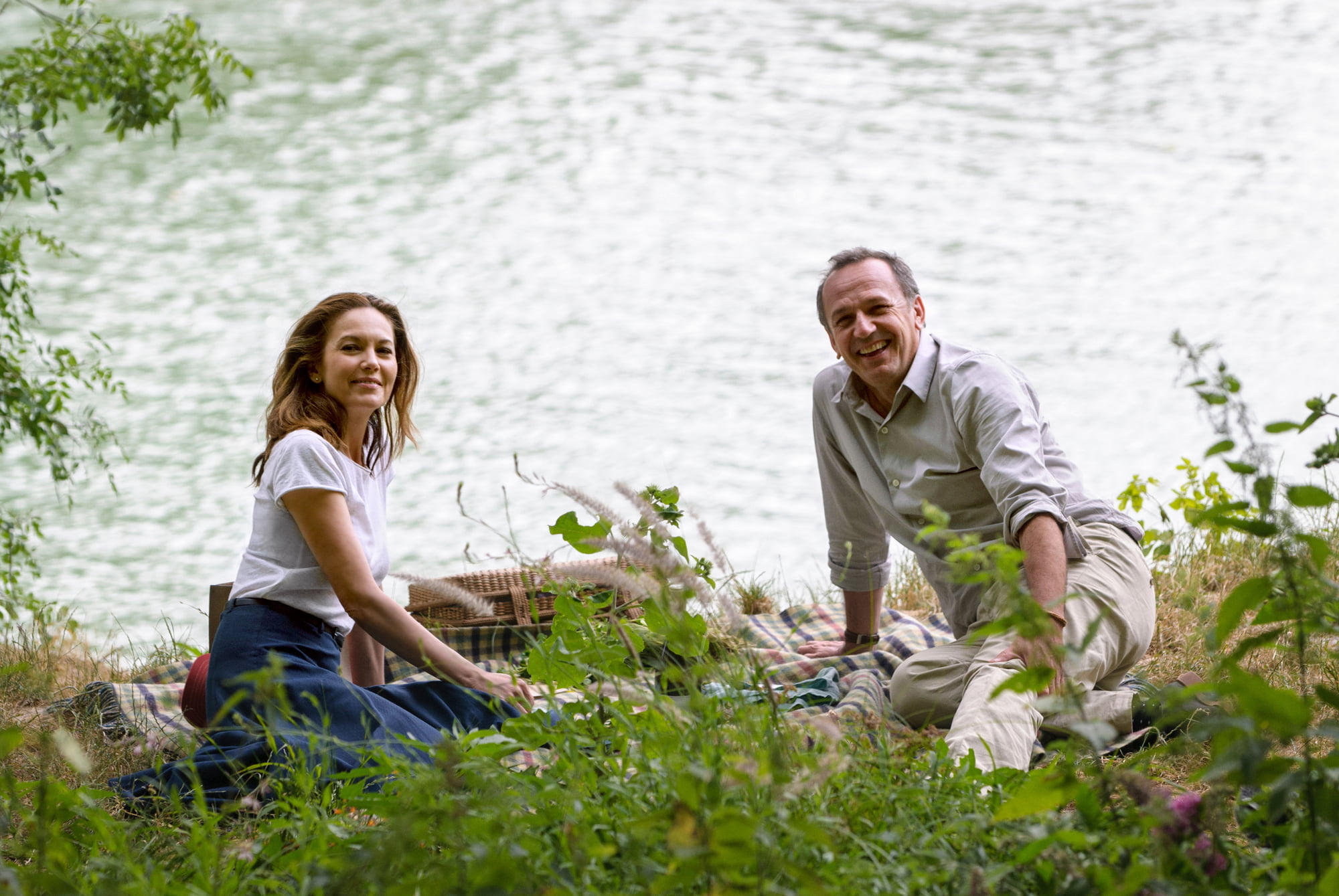 At the age of 81, Eleanor Coppola, wife of Francis Ford and mother of Sofia and Roman, has delivered her first fictional big screen feature as a writer and director, Paris Can Wait, a lightweight, unforced comedic travelogue across France. It’s not the kind of film that comes with a high degree of filmmaking difficulty, nor does it have to. It’s an old school, chaste, “will they or won’t they” romance blended together with a celebration of literally stopping to smell the roses every once in a while. It won’t launch the elder Coppola to the same heights as her noteworthy fellow family members, but as an early summer cinematic confection it hits a sweet spot before petering out in its later moments.

Former dress shop owner Anne (Diane Lane) and her husband, film producer Michael Lockwood (Alec Baldwin), are in Cannes for the annual film festival. He’s trying to make some deals, and she’s trying to keep herself amused. Michael gets called away to Budapest to put out some fires on a troubled film set, but due to an inner ear problem, Anne decides not to fly there with him. Instead, she hatches a plan to meet Michael in Paris once his work duties have wrapped up, hitching a ride with the producer’s French business associate, Jacques (Arnaud Viard). Anne wants to go straight to Paris, but Jacques, possibly being flirty or possibly just being French, makes what should have been a trip of only several hours into a two day sojourn through various charming French communities.

Paris Can Wait takes less than ten minutes to set up in full, and the road trip begins without the viewer knowing a heck of a lot about Anne and Jacques outside of the obvious. Anne’s happy enough on the outside, but clearly repressing her unhappiness about how far her husband has drifted emotionally. Jacques is a blustery, fun loving person keen on impressing everyone he meets. She, like her husband, is goal oriented and business-like. He can’t go more than an hour driving his cramped, aging Peugeot without needing to stop to stretch his legs and fire up a smoke. She still takes photos with a digital camera instead of her phone. He has a voracious appetite, has never married, and always makes up excuses as to why he can’t pay for anything.

None of these traits are true signs of depth, but that’s of no consequence to Coppola. The purpose of Paris Can Wait is simple: to illustrate how well-to-do Americans are unable to relax themselves enough to enjoy the benefits of their privilege. It’s not a slapstick kind of road movie, or even that much of a throwback to the mismatched traveller pictures from the 1930s and 40s. It’s barely even romantic. It’s more of a loose travelogue in the vein of Michael Winterbottom’s The Trip series where the bulk of what goes on involves Anne and Jacques bantering back and forth over enormous spreads of cheese, bottle after bottle of wine, and multi-course meals. 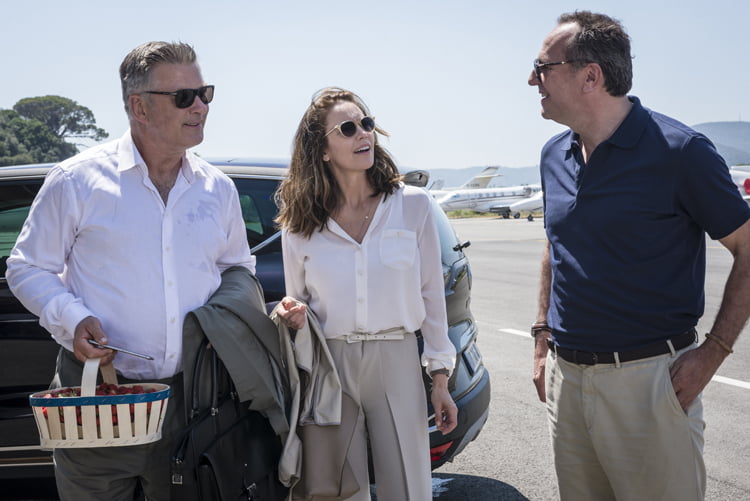 Outside of watching Lane and Virad acting effortlessly charming for ninety minutes, what makes Paris Can Wait so nice is its steadfast desire to take things easy. In her direction, Coppola strives for functionality over style, and in her writing she prefers anecdotes to exposition. While I don’t believe for a single second that someone as aloof as Jacques could ever be a serious business partner for someone as tightly wound as Michael, I do believe that this is the first time the Frenchman and the American women have spent more than a handful of minutes alone together. It’s also nice that Lane’s character isn’t a stereotypical ball of stress all the time, and her consternation with Jacques’ stalling never rises above being slightly miffed and perplexed. Lane and Virad go with Coppola’s flow, never questioning where she plans on taking the performers, and the film falls in line with the relaxed nature of the leads.

It’s nice for a change to watch a film that thumbs its nose at storytelling conventions that insist that the characters, style, or plot of a film have to be complicated or deep to succeed. We don’t know much about Anne and Jacques, and that’s fine. We don’t need to know who they are on a deeper level for us to understand the dynamic and to hope that they get something missing from their lives as a result of this ramble through the city streets and back roads of France. It’s a film that’s slow and feels longer than it is by design. Coppola wants her viewers to get antsy waiting for Anne to make it to her final destination because it will prove her point that American’s can’t enjoy life and their surroundings as much as their European counterparts.

Yes, Paris Can Wait comes from a resolutely privileged perspective, and I have argued for decades now that the one kind of film we need less of are ones where wealthy white folks act depressed about how boring their lives have become, but for the first two acts of her film, Coppola never calls attention to this point of view. We’re just supposed to slow down, enjoy the scenery, and wonder if Anne and Jacques are going to hook up by the end of the picture.

Then the final act hits, and wholly unnecessary bits of ancient backstory are brought up from the lives of Anne and Jacques. It’s hard not to wish that Coppola left these bits out, as they feel out of place with the rest of the film. They don’t function as sudden twists or change what we think of either character. Even if these revelations were introduced earlier in the film, they still wouldn’t have changed the dynamic between Anne and Jacques in the slightest. These well intentioned, but superfluous character traits only serve to bring and already rambling film to a slower crawl. The first hour of Paris Can Wait feels lengthy, but inviting. After that hour, it begins to feel like Coppola has intentionally tied an anchor to her film that the characters are then forced to drag along when they could just as easily cut the cord and keep enjoying life. It sours things, but doesn’t entirely kill any sense of good will the film has earned.

Paris Can Wait wouldn’t be that noteworthy of a debut feature if anyone other than a member of a family packed with filmmaking royalty had made it, but it does show that Coppola knows a thing or two about storytelling. I’m not sure if the octogenarian will ever make another film, but she has done so much for her family and worked on so many other projects that she doesn’t need a lengthy C.V. at this point to be remembered by history. Paris Can Wait is a nice enough film, and it’s hard not to be happy for Coppola’s success in getting this one out of her system.

Paris Can Wait opens at Cineplex Varsity in Toronto and Fifth Avenue Cinemas in Vancouver on Friday, May 26, 2017, on June 2 in Montreal, and in various Canadian cities throughout the summer.

Check out the trailer for Paris Can Wait: