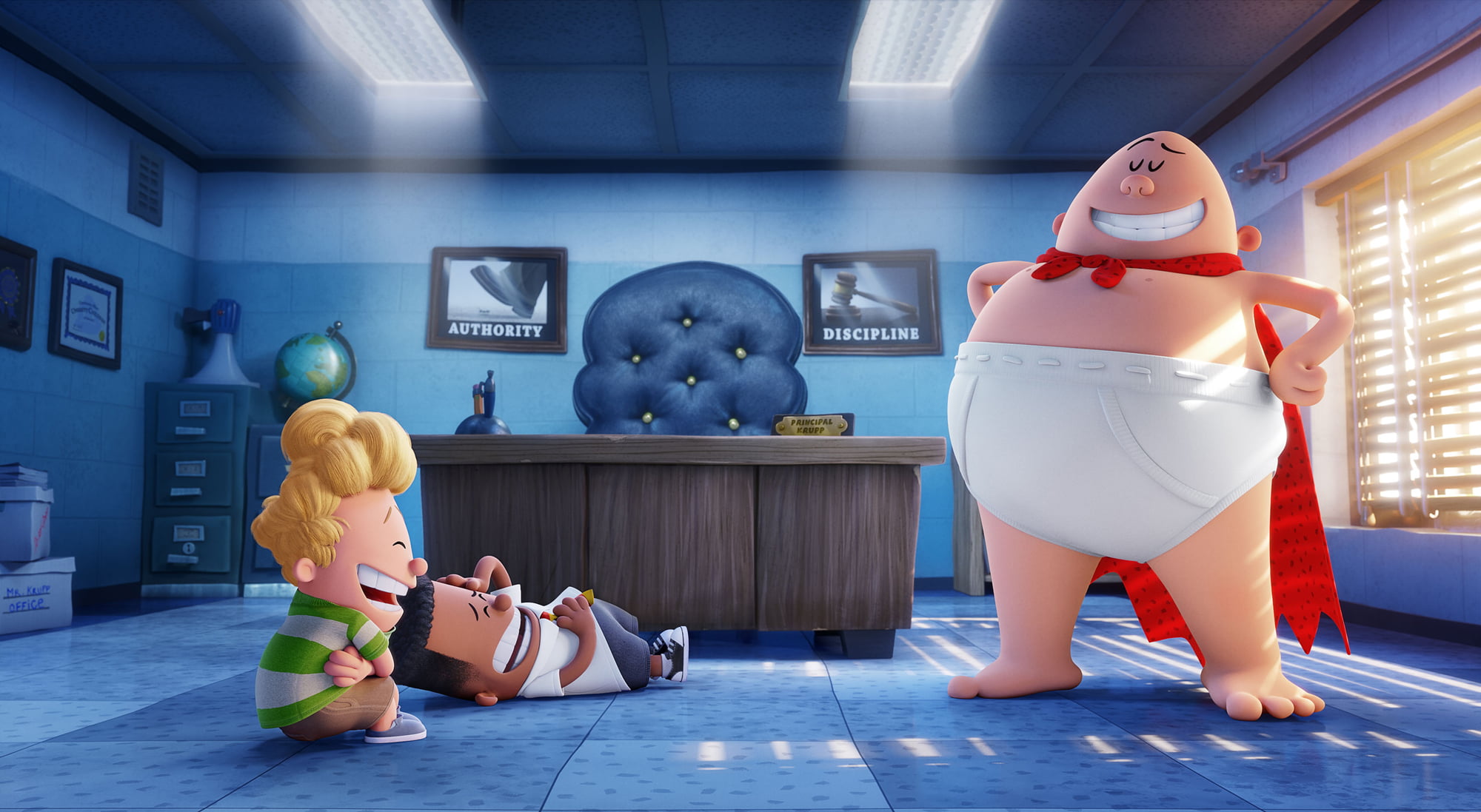 Much like the legions of fans who fell in love with writer Dav Pilkey’s silly, potty humour packed, and wildly inventive series of bestsellers, Canadian raised filmmaker and animator David Soren was an admirer going all the way back to the launch of the Captain Underpants line in 1997, making him kind of a perfect choice to helm DreamWorks’ Captain Underpants: The First Epic Movie (in theatres everywhere this weekend).

Before a hometown screening of the film in Toronto last month, Toronto native and Sheridan College graduate Soren told the audience that he remembered being in a California bookstore just after Pilkey’s first Captain Underpants saga had come out. He noticed the unusual looking pre-teen volume and after leafing through it he wished he had come up with the idea himself.

Not that Soren had any shortage of ideas or work during that time. He’s a veteran talent over at DreamWorks, having worked in various artistic capacities on The Road to El Dorado, Shark Tale, and Over the Hedge. Most recently, he made his debut as a feature director with the animation studio’s film Turbo. Captain Underpants was never initially on his radar of things to do until the adaptation of Pilkey’s series ended up at DreamWorks, but given his initial reactions to the source material all those years ago, getting involved was a no-brainer.

In the animated celebration of childish humour and creativity (written by The Muppets and Get Him to the Greek writer Nicholas Stoller), Kevin Hart and Thomas Middleditch voice George and Harold, a pair of grade school best friends who love hanging out in their treehouse, drawing up their own comics, and playing endless pranks on their overly serious principal, Mr. Krupp (voiced by Ed Helms). After they get caught pulling off one of their carefully orchestrated, often bizarrely specific and elaborate pranks, Krupp wants to split the boys up and ruin their friendship. Thinking quickly, George tries hypnotizing their principal with a swirly-looking ring he got out of a cereal box. Much to their surprise it works, and the BFFs discover that they can control Krupp with a simple snap of their fingers. While under hypnosis, George and Harold convince Mr. Krupp that he’s one of their greatest comic book creations: the pants-less, naive superhero Captain Underpants. For a while, George and Harold think this is the greatest prank they’ve ever pulled, until a real life supervillain by the name of Professor Poopypants (Nick Kroll) and a humourless classmate (Jordan Peele) team up in a bid to rid everyone in their world of their sense of humour.

Captain Underpants: The First Epic Movie, which condenses elements from the first four volumes of Pilkey’s books into one movie, features plenty of blink-and-you’ll-miss-them references to the cherished stories, and retains many of the series more beloved stylistic tropes, characters, and aspects. It also has sock puppets, awkward lunch ladies, plenty of fourth-wall breaking, potty humour, and a literal killer potty.

We caught up with Soren in Toronto the day after the finished film’s first ever public screening to talk about what it’s like to be an adult and make such a gleefully childish movie.

David Soren: It’s funny because it really does have this special place in the memories people have of their childhood, and if you take into consideration how much some people read as kids, that’s no small accomplishment to remain in there in be symbolic of those years. 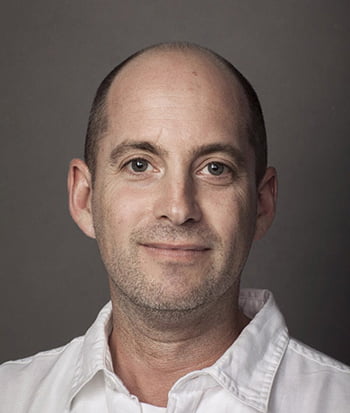 Which makes it kind of great that you can date your own love of the series back to when you first noticed the first book in the series even as an adult. How long had you been a part of the filmmaking process leading up to getting to make this adaptation?

David Soren: I came on the movie two years ago, so not too long actually. It all moved very quickly, and it was a fast production in terms of my involvement. The producers acquired the rights to the books a few years before I came on, and then they started developing, and then Nicholas Stoller came on to work on the script, and by the time everybody felt like the script was in a place where they could start production, then they approached me, and I said, “Sign me up! I’m there!”

A project like this is interesting because you have a story that at its heart is about celebrating creative freedom, so is it interesting try to find a balance between using your own creative freedom while remaining true to these stories that people have such fond feelings of?

David Soren: Fortunately, Dav Pilkey made that very easy for us. He met with me about a month into my tenure on the movie, and I walked him through all of the artwork and talked to him about all of the changes that we were thinking about making, and he was totally in. He was very sure that we were capturing the spirit of what he had created. It was also very clear that he didn’t like word-for-word adaptations of books to movies. He thought they were boring, bland, and offered nothing new that you couldn’t already get from the book. He always thought those kinds of movies were inevitably disappointing, so he wanted to be surprised by what we did. He enabled and trusted us to make the best possible version of Captain Underpants that we could. That took all the burden and pressure off in terms of being overly faithful to the material, but it also gave us enough support from the creator of these characters to know where to push and pull. Trusting us was the best possible compliment, and he even said he was kind of envious that he hadn’t thought of some of the things we were doing with the art. 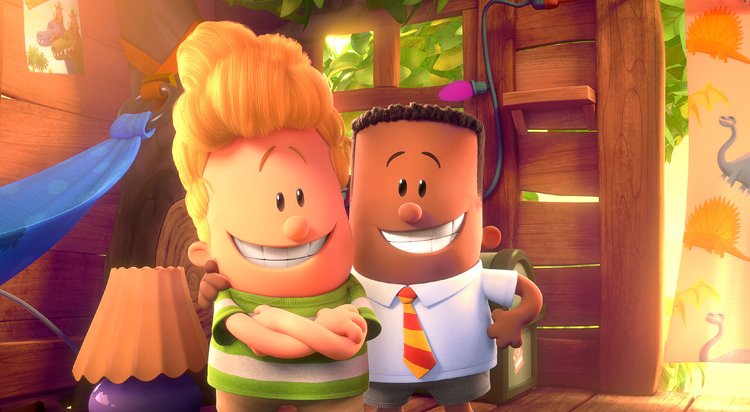 Within all of this, you also have an entire sequence of the film done very memorably and with a lot of in-jokes that fans of the books will get, done entirely with George and Harold as older, sock puppet versions of themselves. How did you guys do that and how did you get away with putting it in an animated film?

David Soren: Oh my gosh, that was great! It was the first sequence we storyboarded when I got on the movie, and I was always excited to work on that. Nick Stoller wrote a great, almost post-apocalyptic vision of George and Harold watching their friendship dissolving in the future, and I was trying to figure out how to visualize what was written. We had this scene in a treehouse that was coming right before it, and they’re dealing with this terrible, traumatic news that they’re going to be put in separate classes, and it was pouring outside, so I thought, “What if they take their socks off and Harold just puts the socks on his hands” and we go into this fantasy. I brought up that idea, and the storyboard artists just looked at me for a long moment and asked “Can we even do that?” (laughs) I said, “Why not?” It was one of those things that’s so crazy that you want to throw it together, and you’re kinda sure it won’t make it through the upper echelon decision makers, but sure enough everybody after our first cut of the film was pointing it out as one of their favourite things. They actually gave us the go-ahead to go back and do even MORE unconventional things throughout the movie based largely on that scene.

One of the more stylistic things that you retain from the books that I think fans aren’t expecting to translate to film is the inclusion of a Flip-o-Rama sequence, and that’s destined to get the biggest reaction from people who love the source material. What’s it like being able to include that in the final film?

David Soren: Well, we KNEW we needed a Flip-o-Rama in the movie. (laughs) We would have betrayed every single fan of the book if we didn’t do that, and in a way every animated movie is a long, super expensive, extended Flip-O-Rama. (laughs) It was just tricky to figure out how far we should take it and how low tech we should make it, and the decision was made to go REALLY low-tech and celebrate how simple those Flip-O-Rama’s are. We also knew this was the place to continue the running gag about how Harold tries to keep putting dolphins into everything he creates. 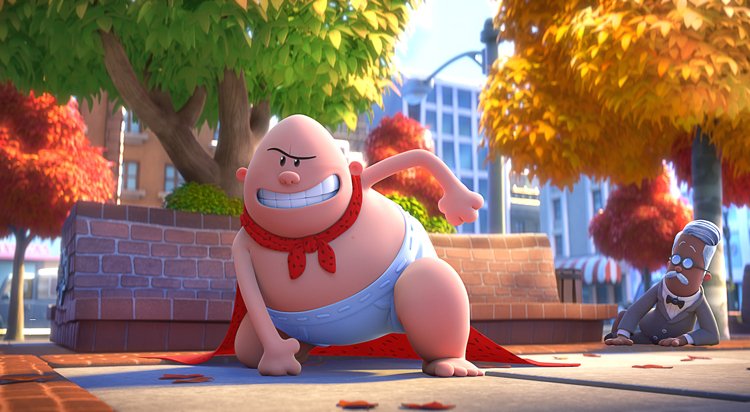 We all know that making movies is a lot of hard work for a lot of people, but it has to be somewhat comforting to be working on a film where you go into work every day to discuss the inner workings of giant toilets and villains named Professor Poopypants.

David Soren: The first couple of weeks that I was on the movie, we had some intense conversations about the Turbo Toilet 2000, and what it should look like and how it behaves, and I kept kind of popping out of the moment and realizing that I am making A LOT of directorial choices about a giant toilet robot. The funny thing is that after a month, I was completely numb to how weird that was and even the most surreal of conversations just became another work day for me. (laughs)