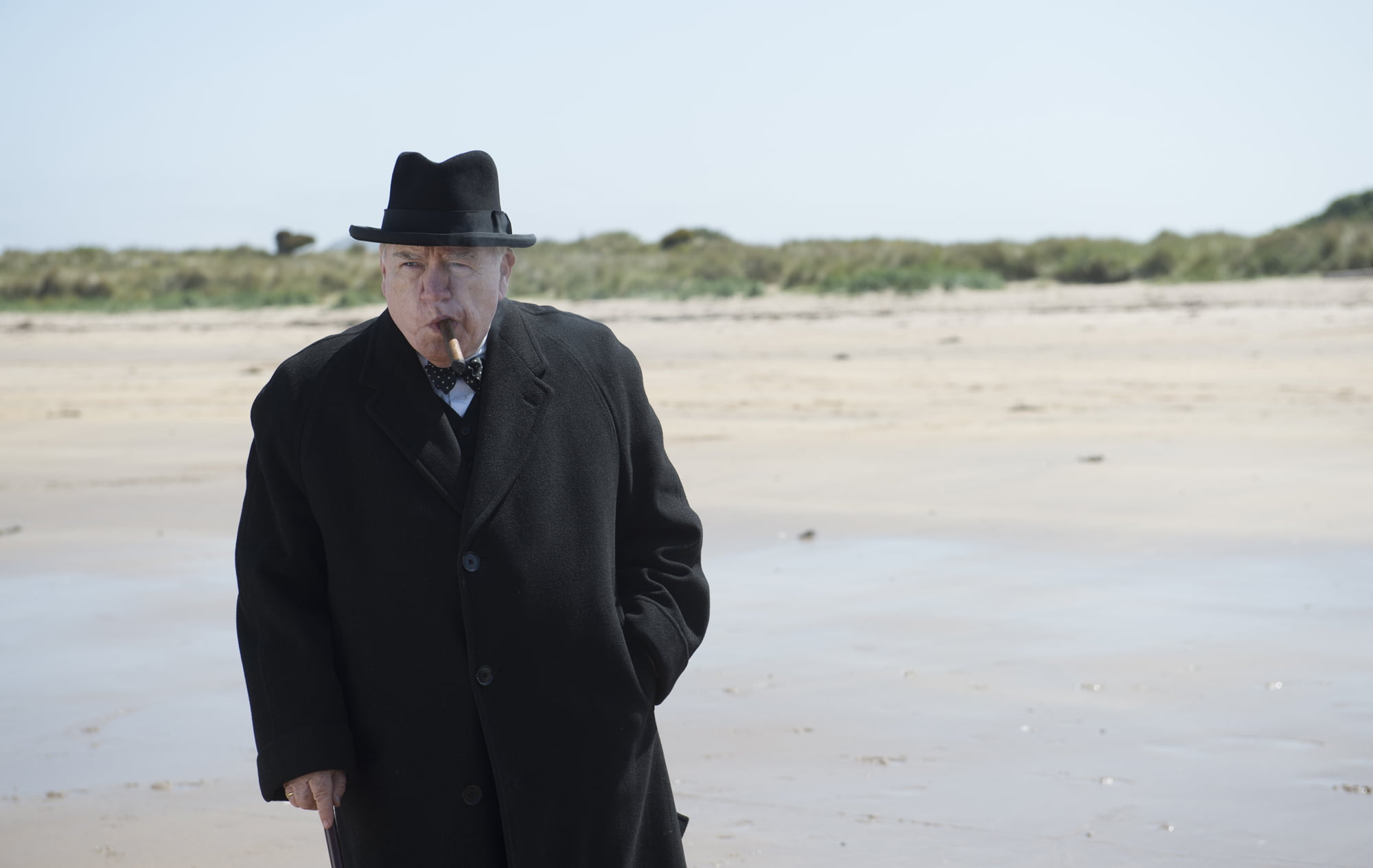 More of a historical drama than a straightforward biopic about its titular figure, Churchill looks at a defining moment in the career of Britain’s most famous Prime Minister with mixed, but sometimes commendable results. Substantively, Jonathan Teplitzky’s look at the lead-up to Operation Overlord in June of 1944 is rather threadbare and features a lot of great actors shouting overwritten lines of dialogue importantly at each other, but a strong central performance by Brian Cox as Winston Churchill and a distinct sense of momentum make it almost worthwhile.

Churchill takes place over 96 hours as Cox’s Winston wrestles with the idea of the impending Allied storming of the beaches at Normandy. Skeptical and wanting to avoid a repeat of the similarly minded Gallipoli Campaign from World War I, Churchill begs Dwight D. Eisenhower (John Slattery) to reconsider the offensive in favour of splitting up the troops. Irked by Churchill’s proposal because the plans for D-Day have been in place for over a month and, Eisenhower dismisses Winston as a worrisome relic, and pretty much everyone except the Prime Minister’s inner circle stops listening to his doomsaying. Once Eisenhower begins the offensive, Churchill agonizes over the decision and waffles when trying to come up with a speech to address his country on the ongoing war effort.

Some clunky, out of place expositional dialogue from Alex von Tunzelman’s screenplay aside, Churchill wisely focuses on its figurehead at a fixed moment in time rather than trying to deliver an all encompassing history. It’s a gambit that mostly pays off as Cox and Teplitzky (The Railway Man) can easily hone in on the emotion of the situation at hand. Churchill casts its sometimes hard-to-like protagonist as a man haunted by the past to a point close to brokenness. Churchill wants to make damn sure that everyone around him learns from past mistakes, but he’s so fixated on the negative that he can’t account for anyone else’s competence or advancements in modern warfare. It’s noble that he understands the pain and suffering war can bring, but he allows that pain to be all consuming to a point where one wonders why he keeps fighting in the first place.

Cox intelligently doesn’t aim for a straight-on impersonation of Winston Churchill, preferring to adhere to cadences and gestures instead of slathered on prosthetics and poor annunciation. Cox captures the fire, strength, and turmoil of Churchill, playing him almost like a Shakespearian patriarch instead of a political and military hero. It’s the Prime Minister as King Lear. Here’s a man who agonizes and rehearses almost every major thought he wants to deliver before speaking them, and when he’s caught unawares and has to think off the cuff, he becomes flustered, boorish, and irritable. Part of his performance’s theatricality might also be because Tunzelman’s screenplay sounds like it was written to be shouted loudly so the folks in the cheap seats could hear it as easily as the front row. It’s not a performance where Cox has the luxury of constant subtlety, but within the parameters that he has been afforded as an actor, he’s quite good. Cox’s portrayal of Churchill is one of great confidence, swagger, and sometimes even petulance; with just a dash of humility should the occasion call for it. 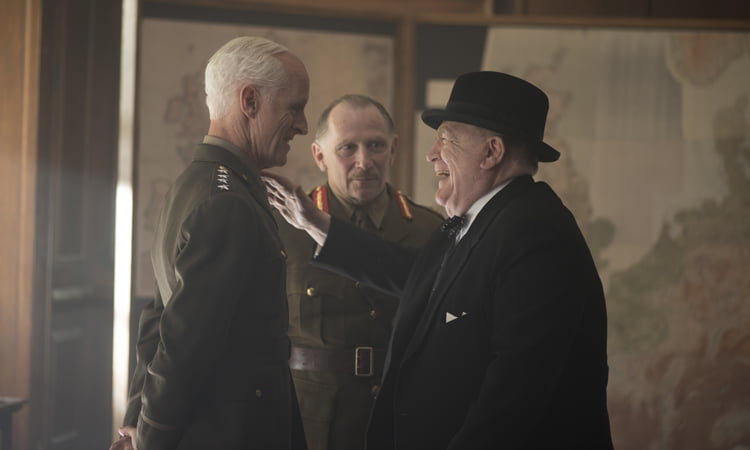 Similarly, Teplitzky directs with a keen knowledge of the script’s stagey feeling. Saddled with a script that features reams of dialogue that sound like recitations of political history lectures filtered through the mind of a hipster professor, Teplitzky makes sure that Churchill never loses momentum. Even in lengthy scenes of dialogue, Teplitzky makes sure that cinematographer David Higgs provides an exceptionally lensed establishing shot and the start of every scene. The camera keeps moving fluidly most of the time, even in close-ups, and some of the film’s most innocuous moments are punctuated nicely by Lorne Balfe’s percussive musical score. It’s these small stylistic touches that make Teplitizky’s work less stodgy and static than the screenplay has been written to be performed.

It’s just a shame that the first half of the film that shows Churchill going toe-to-toe with his American counterpart vastly outshines the film’s plodding, borderline monotonous second half, where Winston commiserates at length about being shut out of the military campaign he helped to start. Everything starts to feel like a chamber drama, and there’s no amount of acting or stylistic tricks that Cox or Teplitzky can attempt to mask how dull things get. We don’t need several scenes of Winston angrily chastising his kindly secretary (Ella Purnell), turning to his closest advisor (Richard Durden) for guidance, or seeking validation from his tolerant wife (Miranda Richardson), but without these asides, Churchill would have ended after only an hour. The titular character sits on the sidelines of one of the greatest military events of all time for so long that the audience gets stuck waiting with him until history catches up to the story being written. It didn’t have to be this way, as I’m sure something great could have been made with a story where Churchill existentially questions how D-Day will impact his legacy, but this film wants to staunchly rely on facts and create overly flowery dialogue without taking the risk of portraying such a man as more of a flawed figure than the filmmakers already have.

Churchill isn’t a great film, and I would stop short of saying it’s good. It’s almost good. That being said, Churchill is a tough character to play without devolving into caricature, and Cox and Teplitzky should be gently commended on delivering a level of restraint that the screenplay they’re working from is lacking. Those who hate scenes where people shout monologues at each other will probably be irked by Churchill’s tone, but these kinds of historical epics have been done far worse.

Churchill opens on June 9 in at Cineplex Varsity in Toronto and International Village in Vancouver, and on June 16 in Montreal.

Check out the trailer for Churchill: