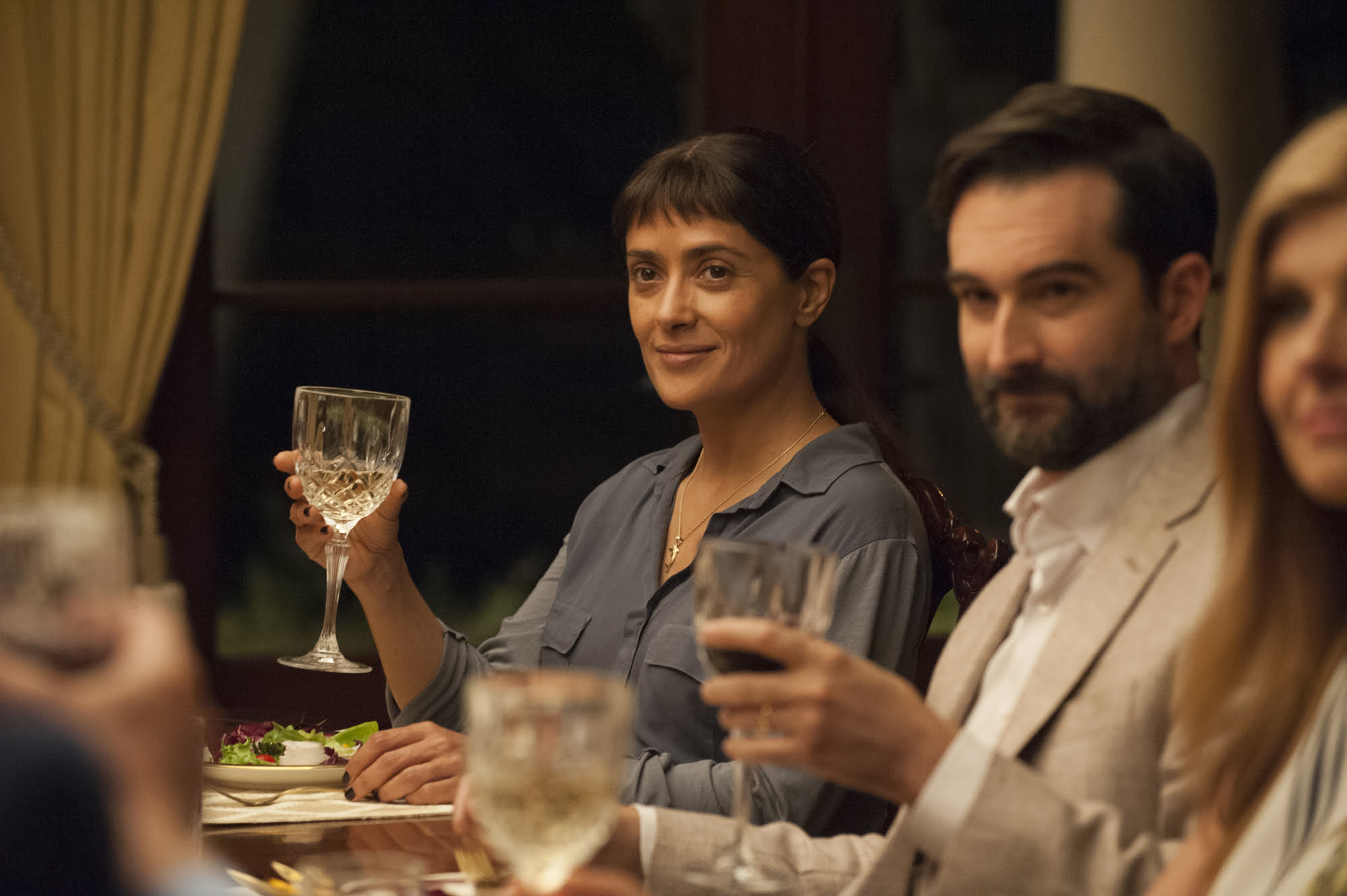 Given its timely release, the deadpan, coal black comedy Beatriz at Dinner could easily be read as a trenchant metaphor for American political and social values under the Donald Trump regime, but it really gets to the icy heart of problems that have plagued America for longer than the orange tinted leader of the free world has been in power. The third collaboration between director Miguel Arteta and writer Mike White (following Chuck & Buck and The Good Girl) is a balanced human drama so painfully close to the bone that the only option to avoid crying about the situation at hand is to uncomfortably laugh at it.

Beatriz (Salma Hayek) is a massage therapist and holistic healer who primarily works out of a California cancer centre. Her work and personal life have been taking a toll on her. She’s an animal lover with murderous neighbours who hate her pets. She’s learned that one of her youngest patients is about to die, and she feels helpless to stop the inevitable. She drifts through most of her days in a lonely haze. Her problems are compounded when her car breaks down at the home of a wealthy client she visits for extra cash on the side. Unable to have her friend come and pick up the car until the following morning, Beatriz is asked by her wealthy socialite client, Cathy (Connie Britton), to hang out at their palatial estate for a party being thrown later that evening. The dinner party is being hosted for business reasons by Cathy’s openly curmudgeonly land developer husband (David Warshofsky) to honour a major deal brokered by a young colleague (Jay Duplass) and a billionaire hotel mogul (John Lithgow). Beatriz, often mistaken by Lithgow’s leering, arrogant Doug Strutt to be a waitress or illegal worker of some kind, observes from the sideline, interjecting more and more as the lightweight masseuse becomes heavily intoxicated. Doug’s presence triggers traumatic feelings for Beatriz, and the evening’s festivities are about to become messy and deeply personal.

At first, Beatriz at Dinner scans like another stage-y, culture clash dramedy about a left leaning working class type running afoul of the capitalist, conservative, bourgeois establishment that seeks to keep people like her down. It certainly starts off that way. Beatriz finds it difficult inserting herself into the vapid conversations rattling off around her. Like a good party guest not wanting to insult a hostess that she feels something for (having helped Cathy’s teenage daughter through cancer treatments), Beatriz attempts to engage in conversation by bringing things back to her own comfortable areas of professional and spiritual expertise, but the fellow revelers merely nod, chuckle, and dismiss Beatriz’s thoughtful and genuine responses as quaint and trite. Beatriz, who’s trying desperately to maintain a positive attitude in an increasingly harsh, uncaring society, has found herself in a world where everything gets nitpicked and analyzed in the bluntest, least constructive ways possible. Everyone at the party, except for Beatriz, is in it for themselves without expressly saying so, and nothing big or small passes by without comment.

Even on a visual level, Arteta finds clever ways of making the film’s audience surrogate feel even more out of place. Using forced perspective to great effect, Beatriz always seems small in comparison to the world around her. There’s a distinct sense that although Cathy values Beatriz’s worth in the world, she also values this woman as much as she values her end tables and patio furniture. In a scene where the women of the party (including Chloë Sevigny and Amy Landecker as the spouses of Duplass and Lithgow, respectively) are walking and talking along the edge of Cathy’s pool, Beatriz seems dwarfed, mainly because she’s the only person in the conversation wearing flats and not seven inch stilettos. In every other visual respect, Arteta wisely keeps the opulence of the setting in check and films things for what they are instead of what they could metaphorically represent, and such a decision allows White’s whip-smart screenplay and the cast’s game performances to elevate the film above its modest premise.

White has long been one of America’s most underrated humorists and humanists. Even with scripts for mainstream fare like Orange County and School of Rock, White has displayed keen senses of character and dramatic escalation borne from plotlines that are so simple they can be summed up in a handful of words. While Arteta (Youth in Revolt, Cedar Rapids) has been one of White’s most invaluable collaborators over the years, the screenwriter’s films have always been about people and how complications arise from feelings and gut reactions rather than contrivances. White makes movies about passionate people – both noble and misguided – and gleefully watches as they crash into each other like trucks at a demolition derby. 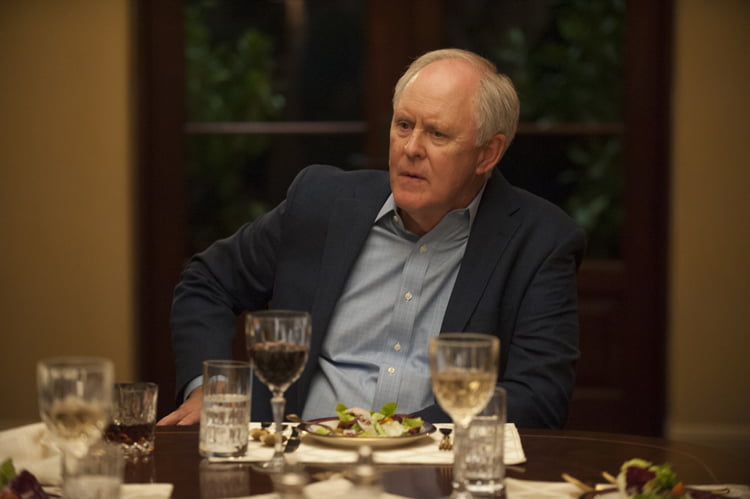 One of White’s better scripts in the hands of top calibre actors is always a joy to behold, and Beatriz at Dinner is no exception, with Arteta wisely deferring to the words on the page and the talents before him. While Sevigny, Landecker, Warshofsky, and Duplass are all  sideline characters capable of interjecting their banal thoughts at any moment, they still get a chance to showcase why they’re all underrated comedic and dramatic talents. Britton has a bit more to do, as the woman of privilege who’s sympathetic to Beatriz’s emotional unravelling. She portrays Cathy as the only person at the party still clinging desperately to some sense of personal morality to keep herself grounded. She’s still as complacent as the rest of them, but Britton makes one feel like Cathy might still be redeemable, whereas her party counterparts are beyond intervention.

Unsurprisingly, it’s the interplay between the person at the party with the greatest wealth and the person at the party with the least societal value that provides White and Arteta with most of their dramatic tension. Hayek, foregoing anything remotely glamorous in her appearance and tone, and Lithgow, preening like a coked-up peacock with an MBA, make for exceptional foils. These are characters more than willing to call each other out on their hypocrisies, but only one Doug can handle criticism and let things slide. Beatriz is an empath who feels everything around her deeply. She cares too much about everything around her. Doug cares deeply, but only about the things that allow him to become wealthier. It would be easy to suggest that the moral battles that play out between Doug and Beatriz as a metaphor for what’s currently going on between Donald Trump and the marginalized, minority working poor in America, but about halfway through the film, White takes things in a different, and even darker direction.

Beatriz at Dinner pushes a lot of its social, political, and economic subtext into the background to tell a more personal story. Beatriz’s increasingly combative and subversive behaviour at the party isn’t only spawned by a hatred and mistrust of those around her, but because she has become burnt out by life. Beatriz gets drunker and sadder as the night goes on, and she becomes the thing everyone at the party secretly wants to write her off as: a whining liberal and Latina stereotype who’s jealous of their success and ability to play the system to their advantage. The biggest parallel between Beatriz at Dinner and Trump’s America isn’t in how Beatriz is placed in opposition to a billionaire blowhard, but in how someone like her can be broken down to the same moral level as those she seeks to oppose. It’s a film about unwittingly becoming what you hate because you think there are no further options. Hayek, in her best performance in quite some time, displays this moral and emotional descent with heartbreaking accuracy.

It all builds to a climax that probably ends later than it should, and it’s one that will surely divide audiences and leave them talking long after they leave the theatre, both positively and negatively. While I understand what White and Arteta are trying to say with the end of the film, I’m not entirely sure they went about it in the best way. It’s a purposefully nihilistic ending, but considering that the material posits several other nihilistic conclusions, I’m not sure the one they went with was the best decision. There’s some thoughtfulness to it, but the final scene of Beatriz at Dinner is also the only one that feels forced and inorganic.

That final scene still doesn’t dampen the impact of everything that came before it. Beatriz at Dinner is both hilarious and gutting, leaving viewers with plenty to think about after it ends. It’s an intelligent treatise on why some people abstain from any and all political arguments in an era where nuance has been replaced by bluster, sarcasm, and snap judgments. For people like Beatriz, the world is a painful, unfair place no matter what they do, and White, Hayek, and Arteta doe a fine job addressing why those with rosy lives should at the very least acknowledge that the American ideal is a dream for some and a nightmare for others.

Beatriz at Dinner opens at Cineplex Varsity and VIP in Toronto and Fifth Avenue Cinemas in Vancouver, on Friday, June 16, 2017. It expands to other markets throughout the summer.

Check out the trailer for Beatriz at Dinner: