On the surface, the open water thriller 47 Meters Down sounds like just another jump scare laden fright-fest where unsuspecting vacationers have a run in with some aggressive man eating sharks. The synopsis alone reads like something that’s indistinguishable from the thousands of films, TV shows, and books with similar aims. It is all of those things (well, maybe scaled back on the jump scares in favour of subtler impending dread), but director and co-writer Johannes Roberts’ work here is stylish, quick paced, and enjoyable enough to distinguish itself from an overcrowded pack.

Kate (Claire Holt) and Lisa (Mandy Moore) are sisters vacationing together somewhere along the Mexican coastline. Lisa has recently gone through a torturous break-up, and Kate is her replacement travel buddy. Kate tries to bring Lisa out of her depressive shell by coaxing her into going on a deep sea adventure in a diving cage, despite Lisa having no diving experience and a constant anxiety about everything that could go wrong. They tag along with a couple of dudes they barely know (Yani Gellman, Santiago Segura), and set out on the rust-bucket ship of Captain Taylor (Matthew Modine). After a jerky deck hand (Chris Johnson) makes the unwise and illegal decision of chumming the water to attract sharks, the girls go into the cage, and – wouldn’t you know it? – something goes horribly wrong. The winch holding the cage in place snaps, and Kate and Lisa are sent hurtling to the ocean floor with large, hungry, irritable sharks swimming around them. Out of radio range to reach the boat, unable to leave the cage for too long because of the sharks, and so far down that they can’t swim to the surface quickly without getting the bends and dying, the sisters have to get creative and work together if they want to survive.

47 Meters Down boast an unpretentious, well worn premise, but Roberts (faring much better here than he did with last year’s The Other Side of the Door) doesn’t waste any time getting to the exciting part of the story, while knowing exactly how long he can get away with his premise. Once Kate and Lisa are put in harm’s way, Roberts and co-writer Ernest Riera unfold things more or less with a sense of real time. It seems like these women are going through a lot, and they’re forced into working quickly in a situation where doing so without panicking is near impossible. Roberts and Riera always come up with logical, if sometimes convenient ways to keep their story going, but they do so without overstaying their welcome. 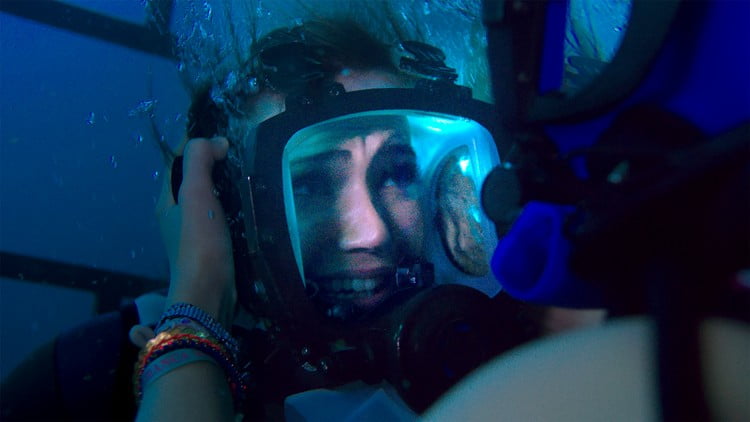 The CGI sharks on display are wisely kept out of sight in the murky ocean depths for two reasons: both to build tension and because they look cheap and crappy. There’s a sense that Roberts knows that the sharks – much like in Jaws, which is forever the gold standard for these kinds of movies – aren’t the sole attraction here. 47 Meters Down gets more mileage out of the claustrophobia of the area around the diving cage and the limited visibility of the setting than it does out of its slow moving predators. First time feature cinematographer Mark Silk assists nicely by making the ocean seem contained instead of sprawling, and an appropriately tense musical score from tomandandy only gets trotted out when it can be used for maximum effect. Moore and Holt also make for likable protagonists who can scream well and have just enough character development to hold them together.

The best thing that can be said about the mostly standard, but enjoyable 47 Meters Down is that Roberts knows audience are conditioned to expect jump scares at the most cynically mandated of times, and as a filmmaker he goes out of his way to make sure expectations are being subverted. Every time Kate and List go to do something dangerous, Roberts allows things to go eerily quiet, as if something major is going to happen. Most of the time, our heroines succeed where they might have failed in lesser movies. And here, if they fail, the outcome is usually unexpected. Sure, there are gauges counting down the amount of oxygen they have in their tanks, and we all know that they will come down to the wire with this, but everything else in 47 Meters Down feels like a fresh take on something familiar.

Check out the trailer for 47 Meters Down: