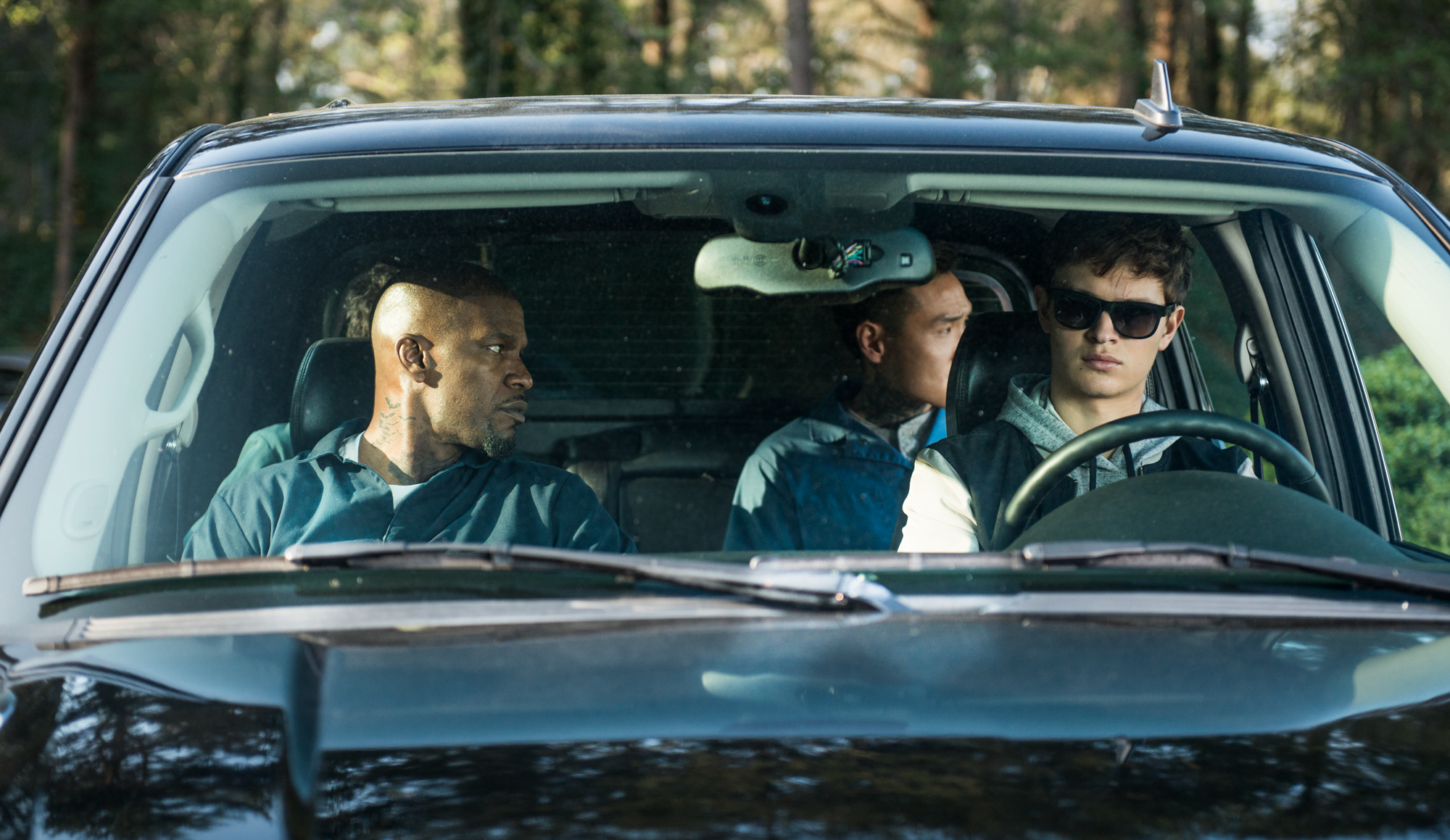 British filmmaker Edgar Wright has always imbued his films with specific, idiosyncratic, and florid sensibilities, but his latest effort – the action comedy Baby Driver – is his most assured and intricately constructed work to date. A passion project for the filmmaker over the past decade, there aren’t any details – large or small – that haven’t been lovingly thought out and executed. It’s a masterful bit of storytelling and direction. Every inch of every frame and every seemingly inconsequential sound effect or character foible get delivered with relentless, accurate vigour. It’s writer-director Wright’s most perfect film, and it’s doubtful that any other studio films released this summed could hope to clear Baby Driver’s ludicrously high set bar.

Talented getaway driver Baby (Ansel Elgort) is in debt to a shadowy, powerful Atlanta crime boss known only as Doc (Kevin Spacey) for a lot of money following a youthful indiscretion. Their relationship is a tenuous, but warm and cautiously respectful one. Doc respects Baby for his abilities and unorthodox methods of driving – constantly wearing earbuds to listen to tunes in an effort to block out a case of tinnitus brought on by a childhood accident – even when other members of his inner circle of thugs and crooks treat the wheelman as a potential liability. Doc also sees Baby as his lucky charm, making him the only member of his syndicate to act as a common player in all of his heists. Baby gets to the point where he has squared the debt with Doc, and he wants to run away and forge a relationship with Debora (Lily James), a waitress that he’s sweet on. Doc both threatens and coaxes the young man to come back into the fold for a Post Office robbery that goes horribly awry, putting Baby and everyone he loves in grave danger.

One of the things that eagled eyed viewers will notice in the opening credits of Baby Driver – which take place over Baby making an elaborate, long take coffee run that gives the opening of La La Land a run for its money – is that Wright has employed the services of a choreographer (Ryan Heffington) to help construct some of the film’s more elaborate movements. Calling Baby Driver’s numerous visual and aural flourishes and action sequences movements is appropriate, since it functions first and foremost as a jukebox musical, secondarily as a character study, and the action and comedy are merely on hand as punctuation. It’s an elaborate dance film disguised as a violent, tough talking thrill ride, and absolutely no one has ever attempted anything quite like this. The hook is a classic pop culture ditty: “every time I try to get out, they pull me back in.” The execution is symphonic, sweeping, and so ambitious that I’m amazed anyone would be willing to give Wright enough time and patience to pull it all together.

We get glimpses as to why Baby has such an infatuation with music, but only just enough to know that his tunes – both the ones he listens to and the ones he creates in his spare time while living at home with his deaf foster father (CJ Jones) – are what keep him moving and functioning. To better understand Baby’s world, Wright immerses the viewer in the character’s perspective. Nothing gets started unless there’s a song on deck (courtesy of Wright’s eclectic soundtrack) and if no music is playing, there’s either a slight ring in the background of the well layered sound mix, an immediate sense of dread and unease, or a necessary moment of reckoning for someone that’s imminent. During every action sequence, the percussive bursts from firearms, explosions, and punches act like musical stings akin to a live band improvising their own notes over a pre-recorded track, with none of these beats feeling out of place. I would call it jazz-like in construction, but it’s so confidently stitched together that none of it could be improvised. Considering Baby’s talents behind the wheel, the film takes its cues from its main character and makes sure that everything unfolding does so with laser precision.

Unlike Wright’s past films, Baby Driver largely jettisons any sort of overarching social commentary and subtext in favour of something more psychological in nature, and the change of pace suits the filmmaker well. Wright’s work here is structured almost like a Rube Goldberg-ian machine, but each player within the machine has been structured and detailed with the utmost care. None of these characters are thin, and all are driven by hopes, dreams, or a concerted desire to thrive on chaos and mayhem. They compliment and clash with each other in seamless ways. 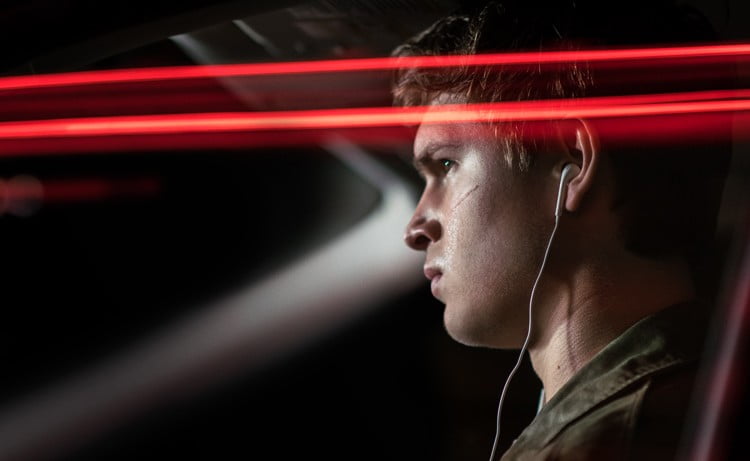 Elgort’s Baby is a lovable, peaceful goofball who bounces and bops his way through dangerous situations, but as the film progresses, the actor (in his best performance) makes sure that the weight of the character’s life choices come crashing down upon him in a hurry. James, at first meeting, seems like a flimsy love interest on hand only to save Baby from himself, but she addresses her suitor in such an open and honest fashion that she becomes the friendly audience surrogate when the sharpened claws of Wright’s narrative show themselves. Spacey plays his ambiguous heavy as an abusive, but potentially redeemable father figure that’s the polar opposite of the real father Baby knew as a child. Every member of Baby’s crew has their own peculiar hang-ups and buttons that can be pushed to make them go from charming and confident to sloppy and nuclear. Jamie Foxx and Jon Hamm, both getting the best big screen roles either has had in years, particularly shine as two vastly different and constantly warring psychotic personalities, with the former despising Baby’s work ethic and the latter trying to make a concerted effort to understand the young man.

These characters come together and blow apart in unpredictable ways. Wright knows the savvy viewer can figure out that this criminal partnership has reached a breaking point, but characters who seem sympathetic on the surface will end up shedding their skin to reveal their true nature, and those who seem particularly loathsome and oily might prove to be useful or useless in equal amount. Wright takes the “no honour among thieves” credo to its logical, lethal, and fatal extremes, and whenever Baby Driver needs to take a turn for the serious, no amount of fun, investment, or tension is lost because the characters are constantly moving and evolving throughout.

Wright has always been a practical and inventive stager of action and Keaton-esque slapstick, but the melodic construction of Baby Driver yields the most beautiful and singular images of his career. Once again teaming up with one of his best collaborators in cinematographer Bill Pope, Wright mounts an action picture that stays in fluid, brightly coloured motion instead of utilizing the murky tones, neon lights, and fast paced edits that have been all the rage since the late 90s. The automotive stunts are dazzling – particularly the auto crunching finale set in the confines of a car park – but the fleet footwork of Elgort and the supporting cast is just as impressive.

I could keep going on about the numerous technical and emotional virtues of Baby Driver, but Wright has once again constructed a film that’s designed to be watched multiple times; packed to the rafters with Easter Eggs, blink-and-you’ll-miss-‘em sight gags, and musical cues that will enhance rewatchablitly. Wright also does all of this without making a film that comes across as too exhausting to watch more than once. Baby Driver is a hyperactive and kinetic film that’s just enough and never too much. I’ve never seen anything like it, and the constantly reinventing Wright probably won’t make another film like this. That’s what makes Baby Driver so invaluable to a summer blockbuster season full of sequels and retreads. If you see the latest Transformers film, The Mummy, or most any other big Hollywood assembly line product this season instead of seeing Baby Driver, do us all a huge favour and stop going to the movies.

Check out the trailer for Baby Driver: