German artist and filmmaker Julian Rosefeldt’s Manifesto has a cheeky, intriguing, and playful idea at its heart: casting a performer to act out and monologue various scenarios where famously groundbreaking treatises on art, commerce, and society (written by the likes of Marx, Debord, Breton, and a cavalcade of other big thinkers) are delivered by fictional characters in everyday situations instead of the historical figureheads best known for penning or expressing such game-changing edicts and opinions. Thanks to Rosefeldt’s decision to cast a performer as versatile and magnetic as Cate Blanchett to act a conduit through which all of these varied and often overlapping ideals will pass, the artist’s experiment mostly works.

The caveat to the overall success of Manifesto is that it probably works better in parts than it does as a whole, which is partially a by-product of having so many warring ideologies on display and mostly because Rosefeldt never finds a coherent pace to link all of these threads together. The ideas are mingled together in ways that make an imperfect intellectual understanding quite easy for those well versed in philosophy, sociology, or any fine arts, but don’t add up to a satisfying cinematic experience. Without his own manifesto to explain why these particular manifestos were so groundbreaking or any other connective tissue, Rosefeldt attains an air of indecipherability that feels counter to what impassioned treatises should do. It’s a neat trick of form and performance, but it never stirs the blood when each part crashes into each other as they do here.

It’s unsurprising that Manifesto began its life as a multi-part installation for the Australian Centre of the Moving Image, and the material is better suited for such a location. It’s quite easy while watching Manifesto and Blanchett’s portrayals of characters as varied as stock brokers, conservative mothers, homeless men, puppeteers, and tattooed nihilists to envision a gallery patron walking between different rooms and being treated to these conflicting and important views on the nature of art in the world. The major difference is that such a unique setting allows for viewers to take in and absorb what’s being said, how it’s being performed, and what it all means in a meaningful way. There are moments where the person viewing these manifestos can take a breather and think. As a cinematic work linked all together, there’s no proper way in a theatre and a single sitting to take any of the style of substance in. In a gallery, this is a work that could speak to a viewer in parts with great power and accuracy. In a theatre, it’s stifling and overwhelming. There’s little room here for thought to be provoked on a case by case basis, and by the end of the film some of Blanchett and Rosefeldt’s best material has been left in the dust. 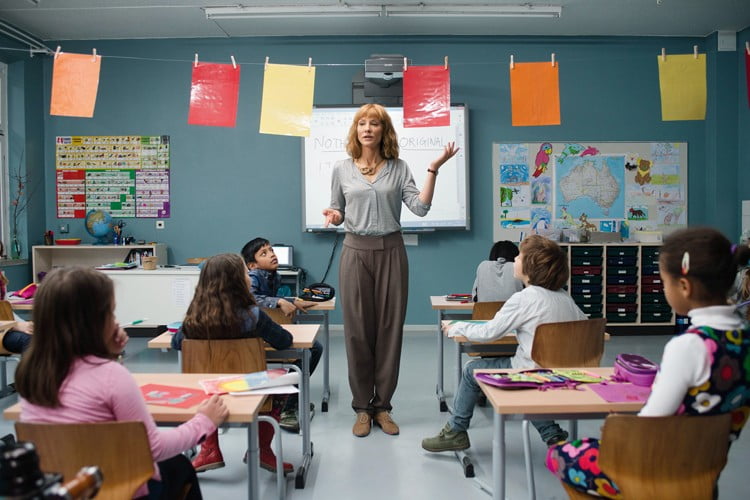 This stern sense of pacing makes the earlier portions of Manifesto hard to get in tune with, despite the best efforts of Blanchett to create characters and Rosefeldt’s inventive staging ideas. Once Manifesto settles into a groove, however, Blanchett and Rosefeldt start having a bit of fun with their stitched together monologues. Portraying a funeral attendee, Blanchett turns a segment on Dadaism into a scorching eulogy for the human race. Hilariously duelling Blanchetts play a news anchor and field reporter going back and forth on the tenets of conceptual art and minimalism. The collaborators arguably save the best (and most cinematically prudent) material for last as Blanchett’s kindly grade school teacher instructs a bunch of children to follow Lars Von Trier and Thomas Vinterberg’s Dogma 95 approach to filmmaking. These moments nicely convey the ideas contained within their individual sections, and Manifesto works best whenever it’s at its most playful and subversive.

There are plenty of existential questions that viewers will wrestle with throughout Manifesto’s various segments. What is art? Is art better expressed as an artist’s sincere look at the universe or as an egotistical reflection of the person making the art? Is art made from privilege and bias less worthy of distinction than inclusive art? Why do we keep looking to art for answers in our everyday lives? The answer to all of these weighty, unanswerable inquiries (which Rosefeldt wisely places on a level playing field) is that nothing is art, so therefore everything is art, and that the validity of the arguments and viewpoints on display are predominantly in the beholder. It’s a series tailor made for an art gallery, but I only wish I had experienced it as such. It’s the rare example of a philosophical work that speeds up whenever it needs to slow down.

Manifesto opens at The Hot Docs Ted Rogers Cinema on Friday, June 30, 2017.  It opens at Cinema du Parc in Montreal on July 7.

Check out the trailer for Manifesto: