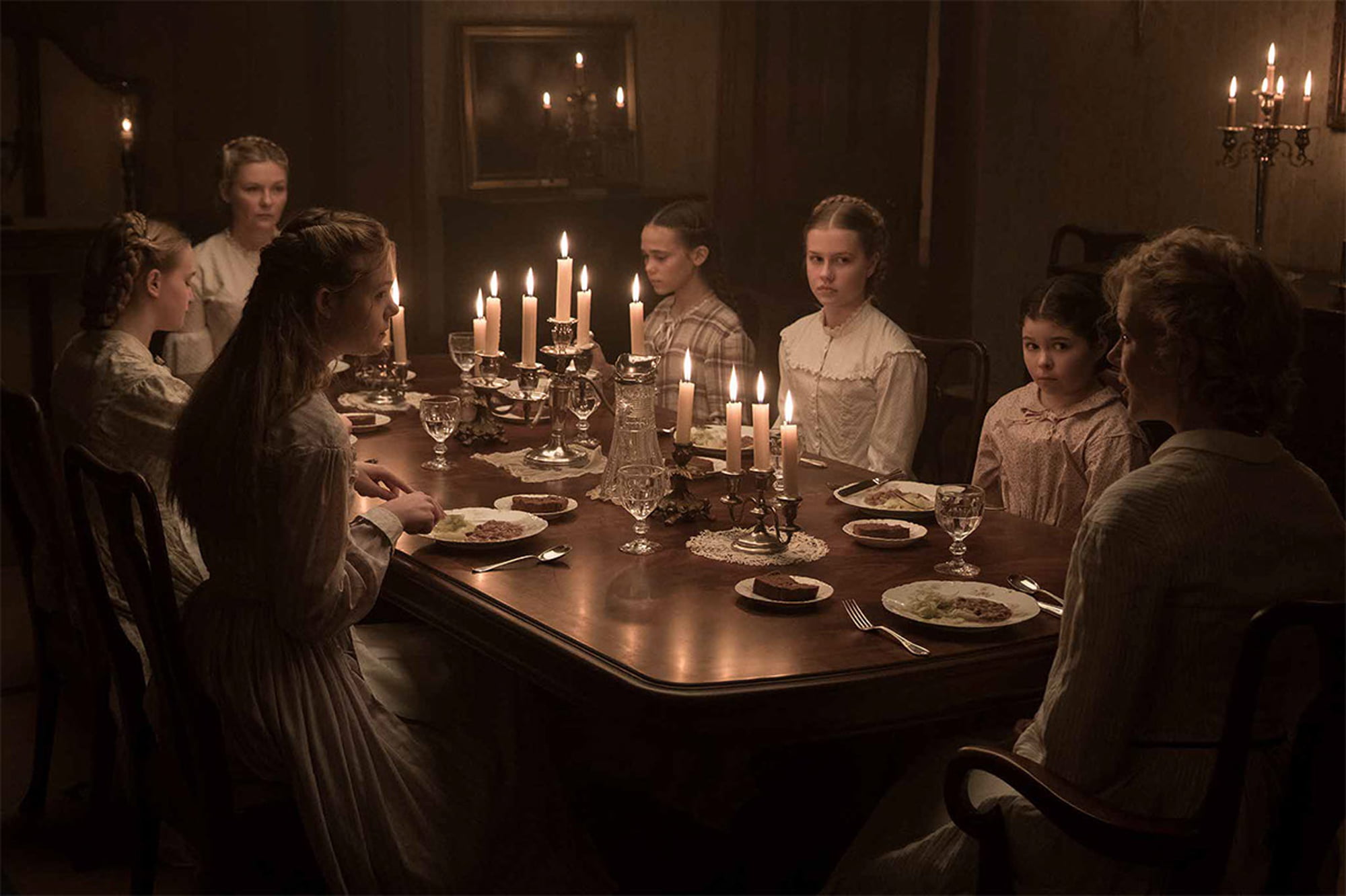 The Beguiled, the latest film from writer-director Sofia Coppola, might take place in Civil War era Virginia, but it’s a story (one twice told before) that could take place in present day with only minor cultural tweaks. Pivoting between a genteel drama and a potent two-way standoff thriller, The Beguiled effortlessly lives in two worlds at once: past and present and light and dark. It’s further proof that Coppola’s best (and often most underrated) works are the ones where she’s able to tap into primal feelings of rage, fear and privilege colliding with one another.

The year is 1864 and the American Civil War is in its final throes. One day, while on a trip through the woods, young Amy (Oona Laurence) comes across the hiding Corporal John McBurney (Colin Farrell), a hired mercenary from Dublin who made his way to America to fight for the Union army but has since deserted. He’s badly wounded, can barely walk, and will surely die in the woods if no one were to help him. Amy brings McBurney to the nearly deserted all-girls boarding school where she lives in hopes that the remaining staff will help the soldier. There are only five students remaining at the school, so headmistress Martha (Nicole Kidman) and primary teacher, Edwina (Kirsten Dunst), are understandably skeptical letting a man on the wrong side of the war into their home. Martha agrees to patch up McBurney’s wounds and let him stay long enough to walk out of there instead of immediately turning him over to the Confederate or Union troops that routinely pass by the front of their estate.

The early tone of The Beguiled – which takes more cues from Thomas Cullinan’s 1966 novel than Don Siegel’s sleazy 1971 exploitation picture starring Clint Eastwood, while still distancing itself from both works – is stately, restrained, and a bit predictable. Coppola revels in natural lighting, period appropriate sets, and smoky, dewy establishing shots of morning in wartime. It’s gorgeous to behold on a technical level, but hardly the main attraction that ropes the viewer in. Coppola’s adaptation errs more on the side of moral ambiguity than period trappings or visceral thrills. It’s a rigidly composed film on a technical and storytelling level, but also a work where Coppola allows her performers to dig deep into their darkly tinted roles.

The Beguiled continually strips away layers of gentility as it goes along. McBurney, on first glance, seems cowardly, but sympathetic, and Farrell turns on the charm and politeness as much as he possibly can to depict a gracious and thankful guest. Martha is understandably skeptical of their uninvited lodger, and Kidman does a fine job of conveying the inner conflict of a woman who doesn’t want to see anyone die, but also has a responsibility to maintain the safety of those under her wing. Edwina starts to have romantic eyes for McBurney, and Dunst nicely portrays the character as someone who strongly rebukes any notion of loving advances in public, but readily wants to succumb to them in private. Meanwhile, as this three way dance continues unspoken, one of the older students at the academy, Alicia, played with gleeful cattiness by Elle Fanning, more overtly lusts after the soldier.

These characters are obviously on a collision course with one another, and there’s always a sense that things will come to a violent head (especially if the viewer is familiar with the source material or Siegel’s previous film), but unlike other mountings of this story, Coppola’s The Beguiled maintains a consistently level head. Without spoiling too much (and too much of this film has already been spoiled by previous reviews and trailers), the romantic tension between McBurney, Edwina, and Alicia will come to a fiery explosion, marked with bad decisions and violent consequences for everyone at the school. McBurney will turn out to be less than honourable (in a major departure from Siegel’s vision of the story), and Martha will have to figure out a way of preserving the peace within her own home. 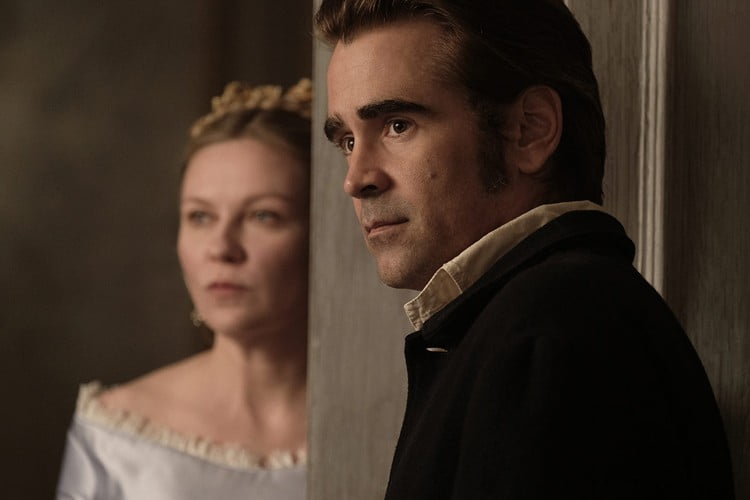 Much like she did in her most underrated and misunderstood films Marie Antoinette and The Bling Ring, Coppola creates a feminist parable on the nature of privilege and complacency in an unjust world. Coppola is at her best when working with characters forced into making major life changes because their current method of existing isn’t working out for them. She’s a filmmaker drawn to characters who will eventually do things that they don’t want to do, and in The Beguiled she finally has material that morally cuts both ways.

Delivering one of the best male performances of the year, Farrell portrays McBurney as someone who can be read in multiple ways by the end of the film, and Coppola gives his performance plenty of room to fester and breathe. The character could be seen as someone pushed too far, someone in a perpetual state of shock and PTSD, or as a coward that has always acted like a wolf in sheep’s clothing. At a certain point, McBurney will do something patently unforgivable (after other characters commit other distasteful actions that can also be read as potentially malicious), and he won’t be seen sympathetically anymore, but the moments that led him to his current state of being are worthy pondering long after the film ends. It might take place in the second half of the 19th century, but The Beguiled functions just as well as a resolutely modernist look at the state of “toxic masculinity” in present day. Farrell seizes upon Coppola’s intentions splendidly and gives one of his career best turns.

Similarly, the mindset of Kidman and Dunst’s caretakers are fascinating to ponder. Both actresses are tasked with subtly crafting characters who believe equally in charity and self-preservation. Each sees something different in McBurney, but Dunst’s teacher clearly sees more in a partnership with the soldier from the outset, whereas Kidman’s matronly figure has to be convinced that he has any social worth. Coppola stages the dance between Farrell, Kidman Dunst, and Fanning like four people playing a chaotic candlelit game of chess on the same board at the same time until one of the characters decides to flip the board out of frustration and anger before the game has reached an amicable conclusion.

The final act of The Beguiled takes a coal black turn towards the horrific, and what once was a refined drama about compassion and helping out in times of crisis immediately pivots into a survival thriller. It’s a credit to Coppola’s assured vision, storytelling chops, and casting choices that The Beguiled is able to pull this sharp turn successfully and effectively. The Beguiled could have felt like two different films stitched together at the kneecaps, but taken as a whole Coppola’s work feels like a tragedy that reaches a sad, inevitable conclusion that’s telegraphed almost from the outset. It’s a film that will leave everyone talking about it after it ends, which is the hallmark of any great work of cinema, and The Beguiled is one of Coppola’s finest and most captivating efforts to date.

The Beguiled opens in major cities across Canada on Friday, June 30, 2017.

Check out the trailer for The Beguiled: