The Big Sick could be identified on one level as a combined romantic comedy and family drama that’s just as rousing as its lower aiming, crowd pleasing counterparts, but that would be selling it short. Sure, it’s one of those “boy meets girl, boy loses girl, boy doesn’t know what he had till it’s gone” narratives mixed with a story about the trepidation one feels when meeting a significant other’s parents, but there’s a rawness and freshness to The Big Sick that can’t be denied, slighted, or overlooked.

Based somewhat on the true story of Pakistani-American stand-up comedian and actor Kumail Nanjiani and his real life wife and co-screenwriter Emily V. Gordon, The Big Sick feels right at home with super-producer Judd Apatow’s past efforts, but director (and gifted comic in his own right) Michael Showalter (Hello, My Name is Doris) finds ways of taking sometimes negative clichés present in Apatow’s work and turning them into overwhelming positives. The result is a film that looks and feels as familiar as a comfortable pair of slippers, but told with an immediacy and intelligence that punches well above its genre’s weight, earning every laugh and tear honestly and effectively.

Nanjiani basically plays himself, a one time struggling big city stand-up trying to grind his way through the nightclub circuit and land a big break. One night at a show, he strikes up a conversation with Emily (Zoe Kazan), and they begin flirting, hooking up, hanging out, and slowly start to become a serious item over several further dates. Kumail agonizes over their relationship, however, because his strict Muslim parents (Zenobia Shroff and Anupam Kher) will disown him if he doesn’t agree to enter into an arranged marriage with a nice Pakistani girl. A big blow up over Kumail’s refusal to introduce Emily to his parents leads to an uncomfortable break-up. Not long after their relationship has ended, Kumail gets word that Emily is gravely ill with a disease doctors are unable to identify. Being the only friend close enough in the city, Kumail is wrenchingly asked to sign paperwork placing Emily into a medically induced coma prior to the arrival of her parents – Terry (Ray Romano, in a warm, career redefining performance) and Beth (Holly Hunter, in her most perfect turn in years) – from the Carolinas. While the three of them continue to show support for Emily, they start an awkward process of getting to know each other that doesn’t go well at first, but eventually blossoms into a strong kinship.

The Big Sick could have easily become a project indistinguishable from any other Judd Apatow joint: a story of a naturally funny and charming dude who learns the power of love and responsibility in a time of crisis. It certainly scans that way on a surface read, but Nanjiani and Gordon have provided their producer with something Apatow’s previous films often lack: a sense of authenticity. Apatow was once described to me quite accurately by a colleague as someone with keen comedic sensibilities who’s incapable of making a film that isn’t told from an extremely privileged, lucky, or wealthy viewpoint. The shift in perspective here to people genuinely struggling with dead end jobs, racial biases, cultural traditions, and overall societal judgments makes what could have been just another story about a sad stand-up mourning a dying relationship into an emotional, but never manipulative gut punch.

I’m sure it helps immeasurably that Nanjiani more or less plays himself throughout The Big Sick, but it’s worth noting that for the first time in the performer’s still budding career that he isn’t playing a character that has been written with any stereotypes in mind. Nanjiani’s lead is the person being stereotyped by the outside world, but he remains his own person, confident in his own beliefs and convictions, but awkward when it comes to matters of the heart and tradition. The actor finds a perfect counterpoint in Kazan (who after The F Word and Ruby Sparks has proven that she has an ear for great romantic comedies), and the pairing make their characters feel like appropriate soulmates and adversaries across their on-screen relationship. 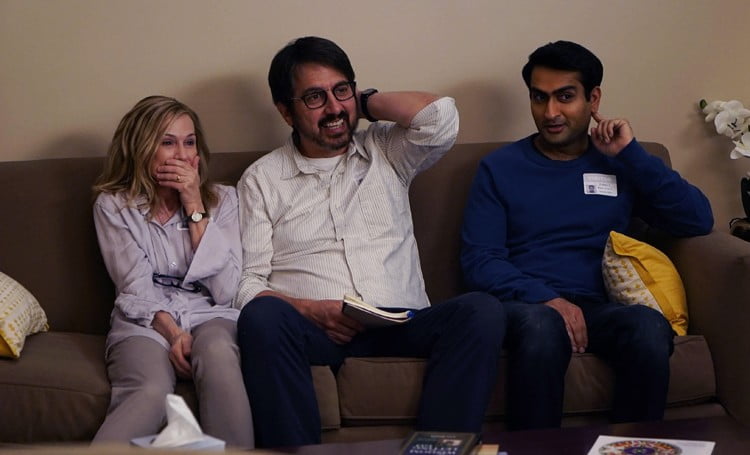 Nanjiani and Showalter have also created a portrait of a lost soul caught listlessly between three different families, none of which he feels particularly at home around. Kumail can’t figure out why his mother and father would have brought him to America if they didn’t want him to have an Americanize life, and as such has been growing apart from them longer than Emily has been in the picture. He wishes he could have parents as supportive as Terry and Beth, but their relationship has been on the rocks and Emily’s condition seems to be the only thing keeping them in each other’s orbit at the moment. The third family is his professional one, where his best friends and colleagues (Bo Burnham, Aidy Bryant, and Kurt Braunohler) try to give him positive reinforcement that he feels uncomfortable receiving and reciprocating.

Showalter knows precisely when to push the buttons of each of these dynamics for maximum effect and weaves them together with great dexterity and emotional awareness, always knowing when to leave well enough alone and refusing to let the film become maudlin or trite. Each of these partnerships comes with its own set of bittersweet ups and downs where Kumail will have to make sense of sometimes senseless twists and behaviours beyond his control, but such is the nature of life. The Big Sick comes with a high degree of ambiguity, so while the viewer wants to believe that everything will reach a tidy, happy outcome for all parties involved, there’s always a sinking feeling that things could fall apart for all of these mostly likable, but flawed people at any moment.

That tenuous, sinking feeling maintains throughout The Big Sick and leads to a conclusion that’s complex, yet satisfying on a deep level of human understanding. The sign of a decently resonant film is wanting to see good people succeed and bad people get their comeuppance. There are no bad people with major roles in The Big Sick, and we want these good people to succeed because we believe they could be real people. It’s a work of pure, unfiltered heart without a whiff of ego or cynicism. In terms of films that want to entertain and engage with wide audiences, The Big Sick stands as a sterling example of how to make a genre picture with heart, grace, and empathy. We need films like this one now more than ever, and every ounce of good will and praise being showered upon it is well deserved.

The Big Sick opens exclusively at Cineplex Varsity and VIP Cinemas in Toronto and Fifth Avenue Cinemas in Vancouver on Friday, June 30, 2017. It expands nationwide on Friday, July 7.

Check out the trailer for The Big Sick: