Review: ‘To the Bone,’ starring Lily Collins and Keanu Reeves 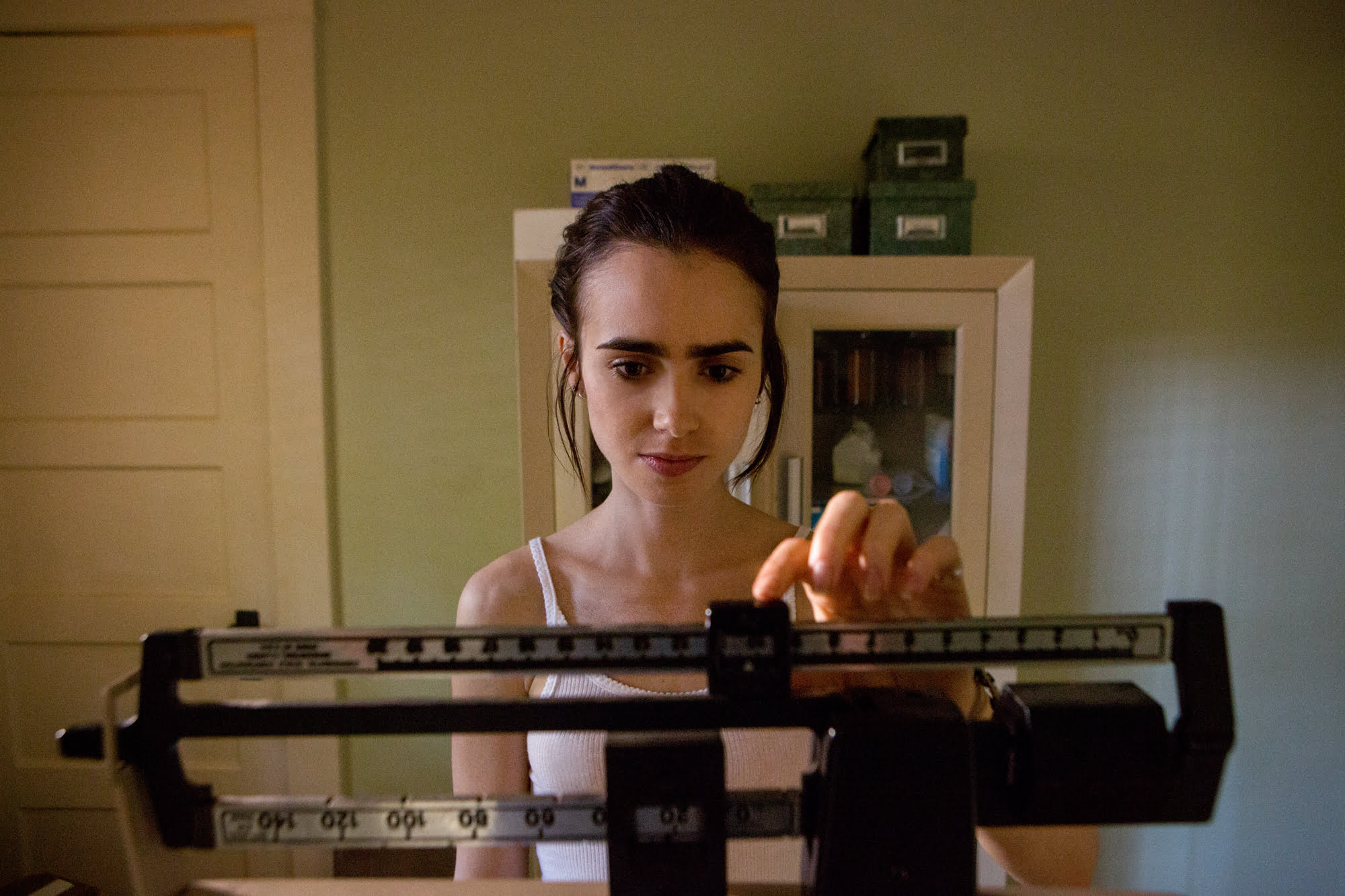 To the Bone wants to be two very different things at once: one of them noble and important and the other hackneyed and clichéd. The feature directorial debut of television veteran and screenwriter Marti Noxon – best known for I Am Number Four, the underrated remake of Fright Night, and the “Once More, With Feeling” episode of Buffy: The Vampire Slayer – To the Bone offers a deeply personal look at the struggles of anorexia through the lens of a filmmaker who once struggled with the disease herself. That aspect is the noble, well meaning, and imperfectly delivered one. It’s just unfortunate that about half of To the Bone is a turgid, chaste, thoroughly unconvincing teen romance that bogs down a lot of good and necessary conversations that could be had from the material.

Lily Collins stars as Ellen, a twenty year old college dropout from Los Angeles and visual artist who carries with her a certain bit of cultural infamy. Ellen has struggled with anorexia and her determination to stay thin at all costs. She’s constantly measuring her arms, relentlessly performing sit-ups until her spine bruises her back, and she can rattle off the calorie count of any meal put in front of her with frightening accuracy. Still far from hitting bottom, her scattered, dysfunctional family have become frustrated with Ellen’s rebellious attitude towards seeking treatment and help. After being kicked out of every hospital and in-patient treatment facility she has ever attended, Ellen is coaxed into seeing William Beckham (Keanu Reeves), a doctor with “unorthodox” methods of treatment. The rules and structures put in place by the doctor at his halfway house for young adults struggling with a variety of eating disorders initially cause Ellen to start lashing out in her old ways, but eventually the young woman begins to warm up to the therapeutic process.

Let’s start with the many things about Noxon’s To the Bone that actually work. First, and perhaps most importantly, Noxon has made a film about anorexia that neither glorifies the illness nor turns it into fodder for a moralizing after school special.  Noxon and Collins have both stated that they have struggled with eating disorders in the past, and the director and star are always careful to show the mindset of an anorexic without unwittingly signing off on the self-destructive often manipulative behaviour of the characters. The tone here is empathetic, but skeptical throughout, a great balance that allows the ravages and madness of such a disease come to the fore.

Collins commits fully to her leading role – including dropping a bunch of weight, which is problematic when you think about it – and Noxon doesn’t pull any punches when it comes to how her characters see their diseases as helping rather than hurting. Part of the treatment process is getting someone to realize that they have a problem, and while that takes a great amount of time, Noxon is more than willing to put in that effort and Collins expertly showcases Ellen’s illness as both a form of defiance and a result of insecurities. Most importantly, Collins and Noxon are willing to make their heroine seem unlikable and somewhat irredeemable, and a repressed secret about Ellen’s artistic past introduces a necessary conversation that needs to be had about the power social media can have on mental illness.

The depiction of Ellen’s family is also refreshingly three dimensional and adds another interesting dynamic whenever they pop up. Ellen’s dad is noticeable by his complete absence throughout most of the film, while her stepmother (Susan Preston) tries her flustered, but level best to help and understand a situation she’s ill equipped to deal with on her own. There’s a fascinating push and pull between Ellen, her semi-estranged mother (Lili Taylor), and her mother’s partner (Brooke Smith) that bristles with both love and tension. The heart of the film, and something I wish there were more of, is Ellen’s interactions with her concerned sister, played by a scene stealing Liana Liberato, a character who seems like the only member of their family to have learned from the dysfunction around her. While it’s impossible given everyone’s opposing viewpoints and obstinacies for Ellen’s doctor to conduct any sort of family group therapy, any time spent with those closest to the main character offers the most dramatic and emotional value.

From this sturdy narrative foundation and a wealth of heartfelt ideas, Noxon then creates a frustratingly uneven and unimaginative final product. Most of Ellen’s fellow patients and the facility’s nurses are two-dimensional and interchangeable, and their witty banter between one another comes straight out of any number of mental health or addiction narratives that take place in similar treatment facilities. Despite giving the supporting cast little to work with, Noxon does thoughtfully make sure that the patients have certain, specific psychological triggers for their diseases, which elegantly shows how no two forms of eating disorders are created equally or in a vacuum. Everyone talks tough and brave like they have all the answers to their illness figured out, and there’s very little obvious depression and suffering that’s allowed to creep through in an effort to keep things somewhat bright and cheerful. 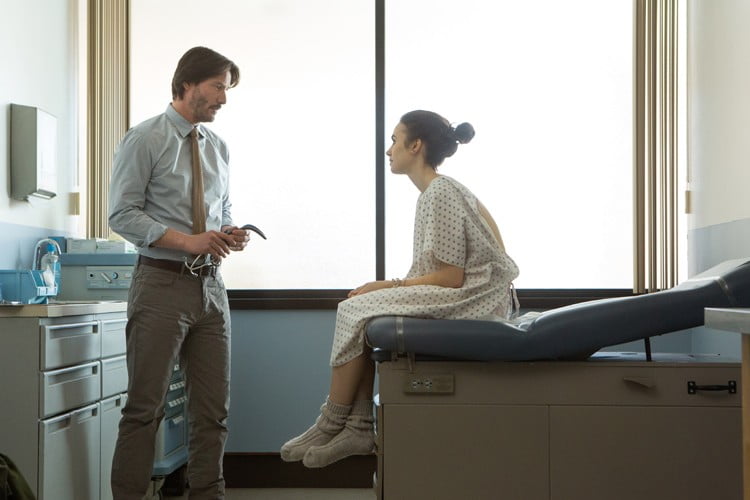 Reeves does a fine job in his likable supporting turn as Ellen’s doctor, but his character is just a pie-in-the-sky approximation of what a hip, perfect doctor would look and sound like to a teenager and not someone that anyone who has been through mental health trauma would ever recognize as being a real person. He’s the type of doctor who would organize a trip to an art museum just so his patients could experience the beauty of life, but more importantly so Noxon could stage a semi-inspirational sequence at the film’s midway point. To the Bone might not be glorifying the debilitating disease at its centre, but it’s assuredly glamorizing the recovery process, and that’s something that should be taken a lot more seriously than it is here.

Worse than the sunny nature of a therapeutic program designed to allow patients to hit rock bottom in a supportive medical environment is Noxon’s insistence that To the Bone have a heteronormative love story aspect. Almost as soon as Ellen arrives to the facility, she catches the eye of Luke (Alex Sharp), the facility’s lone male patient. Luke is a Brit who comes to California by way of New Jersey (wearing a pendant of the state around his neck in case we ever forget) and an anorexic ballet dancer trying to work through an injury brought on by his own gaunt frame. Luke loves to speak in riddles, rattle off his literary influences (specifically Raymond Chandler and food columnist Jonathan Gold), and he doesn’t seem to want to give Ellen a moment alone. They flirt, go out on dates, and Luke becomes pushier in his romantic advances while Ellen remains skeptical.

Noxon frames this toxic, ill advised romance as something cute and irreverent when in execution it’s annoying and distracting. Sharp’s performance is flamboyant, obnoxious, and over-the-top, but it’s hard to tell if he’s at fault or the character was genuinely written to be an irrepressible force of audience aggravation. Watching Collins try to carry her scenes alongside Sharp elicits as much sympathy for the actress as thinking about what she put herself through to play this part in the first place. Luke comes across more like a stalker and less like a genuine friend, and a scene where he tries to sexually seduce Ellen with a Goo Goo Cluster bar is beyond the pale of good taste, yet played for laughs. Noxon never wants to address how this potential partnership could ever be a bad thing for the both of them. It feels icky, hackneyed, and out of place in a film that already dances with cliché in a bid to never become too depressing to handle.

Noxon’s direction also suffers from a lot of first feature jitters, most notably in the film’s visual style, which is comprised of a lot of unnecessarily shaky handheld camera shots, which I’m sure is meant to convey a sense of intimacy, but instead make an already heavily polished story with few rough edges ring hollow. The introduction of the love story angle also leads to a work where the pacing and momentum of Ellen’s road to recover is constantly starting and stopping. Every time Luke and Ellen are having a date or a moment, it’s like time stops and the viewer has to wait for someone to come along and resuscitate that real dramatic meat of the film. I understand that the friendship and flirtation between these characters is meant to have a time stopping effect for the two of them, but it shouldn’t stop time for the audience for something less interesting than the film’s initial goals.

For depicting eating disorders as complex, hard to fight illnesses, Noxon and To the Bone deserve a certain degree of celebration, and hopefully the film’s more righteous aspects are what ultimately show through. There’s very little about To the Bone that couldn’t be forgiven or fixed by simply ditching the unnecessary and highly problematic love story angle. It doesn’t need to be there and it definitely cheapens what’s otherwise a perfectly find young adult drama.

Check out the trailer for To the Bone: