All the Rage documentary review

The health and wellness documentary All the Rage makes it known from the start that it’s kind of a mess, and such an earnest declaration up front goes a long way. A look at the work of revolutionary thinker and doctor John Sarno, the film by Michael Galinsky, his partner Suki Hawley, and their producer David Beilinson blends personal testimonies, complex human struggles, and scientific and psychological research into an ungainly, but likable and often uplifting final product.

Dr. Sarno, a former practitioner at the NYU School of Medicine who passed away this June at the age of 93, wrote a number of bestselling books about the link between chronic pain and underlying psychological factors. It was the belief of Dr. Sarno that not every chronic bodily pain should be cured via medication, surgery, intense physical therapy, or any number of other holistic treatments. Dr. Sarno wrote and lectured at great length about how anxiety, anger, and repressed feelings (some dating back to childhood) could manifest themselves as often debilitating physical aches and pains. Although he was shunned by many within the medical community (to a point where doctors in his own hospital refused to refer patients to him), Sarno never wavered in his belief that most chronic pain could go away if the patient in question simply treated themselves better on a psychological level and openly addressed long simmering feelings.

The personal aspect of All the Rage doesn’t come from Sarno’s struggle for legitimacy, but from director Galinsky’s own battles with horrific back pain. Shortly after trying to release his last documentary with Hawley (the wonderful Battle for Brooklyn, which played Hot Docs several years ago), Galinsky also wrestled with the death of his father, unresolved feelings towards his mother, a sense of professional inadequacy, and trying to raise his children in a comforting environment. Galinsky would often be confined to the floor of his office for days on end, unable to move. The majority of All the Rage chronicles Galinsky’s healing journey, which began all the way back in 2004 and became more intense in 2011.

Galinsky has a lot of gratitude towards Dr. Sarno, and the filmmaking bias never stays hidden here. No detractors of Dr. Sarno are ever talked to, which makes sense because he was a doctor that was constantly under ideological attack. The place of medical experts is taken up by candid celebrity testimonials from the likes of Howard Stern, Larry David, Andrew Weil, and John Stossel. Galinsky nicely documents that Dr. Sarno isn’t some new school healer, but rather an old school, conservative thinker in the vein of Freud or Descartes. The film also makes it known that Dr. Sarno really only treats patients who don’t have obvious injuries like tumours, muscle tears, fractures, or debilitating illnesses. He’ll only treat those who are face with a choice between restful mindfulness or having a portion of their spine shaved off via surgery or a lifetime of medication. All the Rage makes the case that despite having views that run counter to convention, John Sarno still exhibits all of the traits that a great doctor should possess. 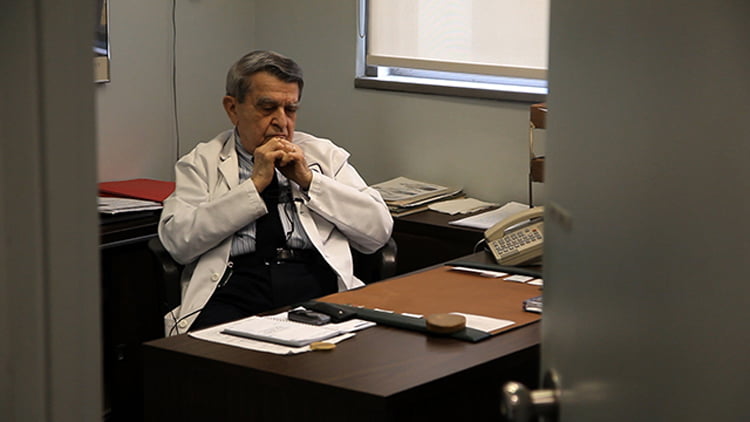 All the Rage has a lot of ground that it wants to cover, but the filmmaking team never nails down a comprehensive look at either of its main subjects. By bouncing back and forth between Sarno and Galinsky, gaps emerge in both narratives that frustratingly never get filled. Dr. Sarno’s approach to psychologically treating physicalized ailments is left almost purposefully vague in the same way a magician doesn’t want to give away the biggest parts of their tricks. If Galinsky and company were to do a deep dive into Sarno’s lectures and books, no one would pay money for the books or psychological treatments, leading to All the Rage having a commercially cagey sensibility to it that runs almost counter to the doctor’s core belief that anyone can heal themselves if they’re mindful and patient enough to try.

The decision to intercut the history of Dr. Sarno with Glainksy’s healing journey is also curious because the filmmaker’s road to recovery is long, setback plagued, and imperfect. As a testimonial for how well the doctor’s treatments work, Galinsky might not be the best case subject. Galinsky often has to supplement his recovery with trips to other doctors over the years, and there seems to be a lot of psychological anxieties and foibles that the filmmaker seems hesitant to acknowledge. This adds a rougher edge to All the Rage, and curiously despite Galinsky’s overall positive outlook it brings with it the film’s only touch of skepticism.

The holes that arise throughout All the Rage are hard to overlook. Dr. Sarno obstinately believes that he can’t engage in any arguments about his methods or treatments with most conventional doctors, so Galinsky follows suit and never presses to hard to find examples where his subject can be refuted or countered. While Galinsky pauses at one moment to rightfully discuss how poor people – those with the least access to health care and most likely to be stressed out and angry all the time – suffer the highest and most consistently growing rate of chronic pain, the filmmaker never addresses that going to Galinsky’s seminars and buying his books are also a form of privilege that the marginalized masses can’t afford in the same way they can’t afford medication or surgery. Furthermore, Dr. Sarno’s research and work becomes blurry when the filmmakers never find a way to differentiate between “residual child” psychological traumas and modern stressors. There’s clearly a line somewhere in Sarno’s work that never emerges because All the Rage staunchly resists the notion of lines altogether.

All the Rage is one of those documentaries that the majority of viewers will either love or hate. Dr. Sarno’s research is sure to ruffle some feathers, but it also offers a lot of food for thought should anyone want to look into his research. Galinsky and company’s patchwork approach is earnest and unabashed in its bias, which will make some balk at how recovery is presented, but I happen to find it refreshing and honest instead of forced and pedantic. If the film had a bit more focus and more detail, I might be convinced to look into Sarno more, but there’s too much missing from All the Rage to make me want to rush out and buy a book. Still, in an age where ill informed online diagnosing of ailments from migraines to cancer have made us a world of hypochondriacs, it might be wise to start listening to the late Dr. Sarno sooner rather than later.

Check out the trailer for All the Rage: