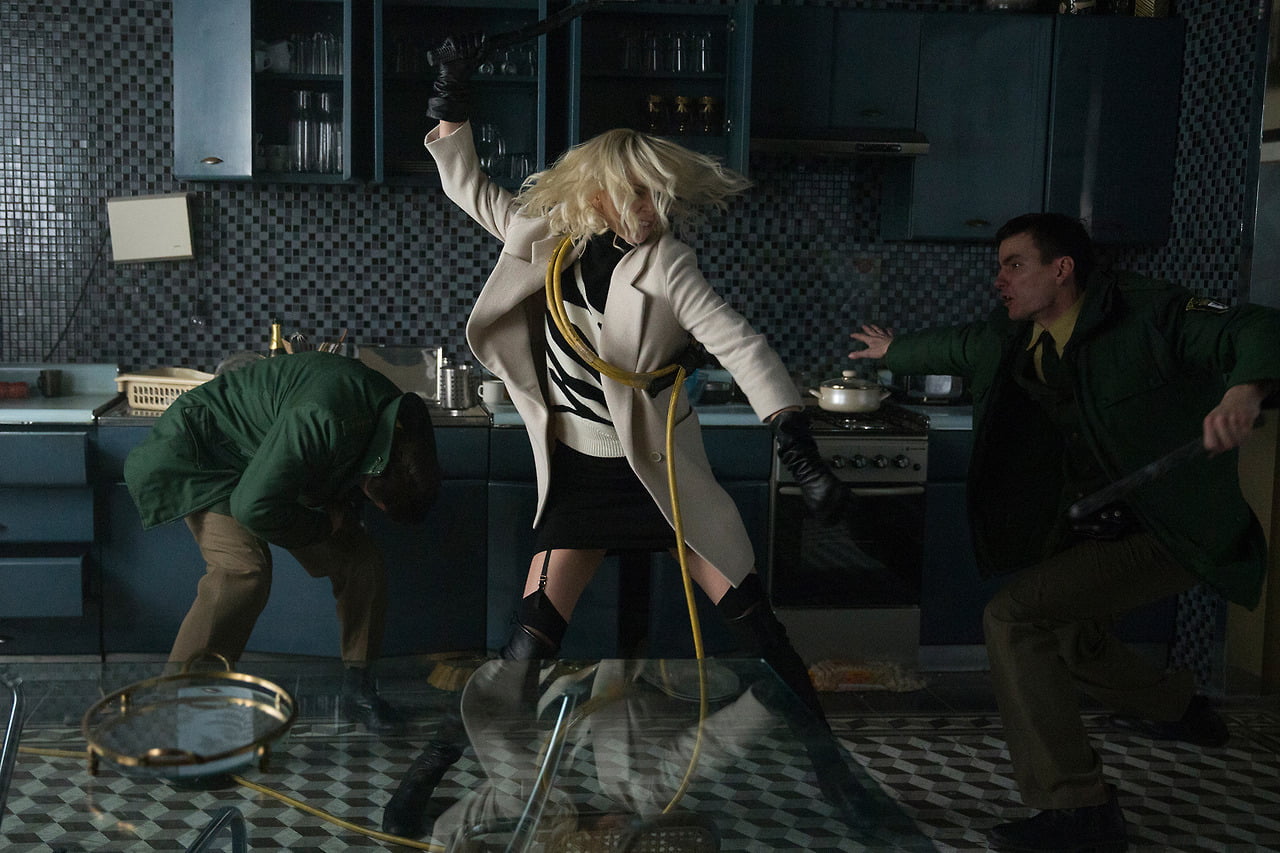 Comparisons between Atomic Blonde and John Wick are unavoidable. Both are films are about an unstoppable assassin who kicks things into high gear following a double cross and in the face of villains who threaten something the main character seems to love more than their own lives. The action sequences are hard hitting, elaborate, and heavily coreographed. Both films feature charismatic, strong, silent performers as their choice of leads while relegating character actors with familiar faces to key supporting roles. The most obvious differences here are gender swapped leads, a change in time periods, and less reliance on neon colours in favour of an emphasis on gunmetal grays. The biggest difference, however, is that while Atomic Blonde is a dutifully entertaining beat-em-up, it’s clear that Leitch is, for now, the less seasoned and artistic of the two filmmakers, and the fact that he’s working from a more inferior screenplay doesn’t help the cause.

Charlize Theron solidifies her status as her generation’s strongest and most charismatic female action hero with her turn as Lorraine Broughton, a banged up MI-6 agent brought in to answer to her superiors (Toby Jones, James Faulkner) and a CIA stooge (John Goodman) about a fouled up mission to retrieve sensitive information from a contact in Berlin mere days before the fall of the Berlin Wall. Through flashbacks we learn that Lorraine’s job was supposed to be simple: assist a highly decorated but boorish and burnt-out fellow agent (James McAvoy) in the protection of a former Stassi agent turned informant, codenamed Spyglass (Eddie Marsan), a nerdy and needy family man in possession of a list containing the secret identities of all allied spies operating in East Germany. Almost immediately upon arriving in Germany, Lorraine’s cover is blown and her simple mission becomes a fight for survival where she can’t trust anyone.

Atomic Blonde strives for the same effortless cool that John Wick attained, but falls short mostly because the adapted script by 300 and Act of Valor writer Kurt Johnstad doesn’t have nearly as much depth or detail. Whenever Theron isn’t laying waste to dozens of faceless and malicious grunts at a time, Atomic Blonde gets bogged down in convolution and an abundance of underdeveloped characters that serve only as cannon fodder for the film’s climax.

The historic wrinkle of Atomic Blonde taking place only days before the fall of Communism in Germany is initially nifty, and the idea of spies being forced to reconcile with their impending obsolescence could be intriguing. Instead, Johnstad’s scattershot story sets up too many foreign baddies and offers up a tacky, half-hearted, borderline exploitative lesbian romance for Lorraine (which does, admittedly, include some nice work from Sofia Boutella), with none of it developed enough to make the viewer care or make sense of what’s happening. There’s also a sort of mythical watchmaker-slash-black market secrets dealer (Til Schweiger) who hints at a Wick-ian sort of larger spy universe, but even that doesn’t get favourably followed through to any sort of conclusion or payoff. The film’s historical background also makes the story’s big reveal horrifically obvious if one were to even think about such things for a nanosecond. 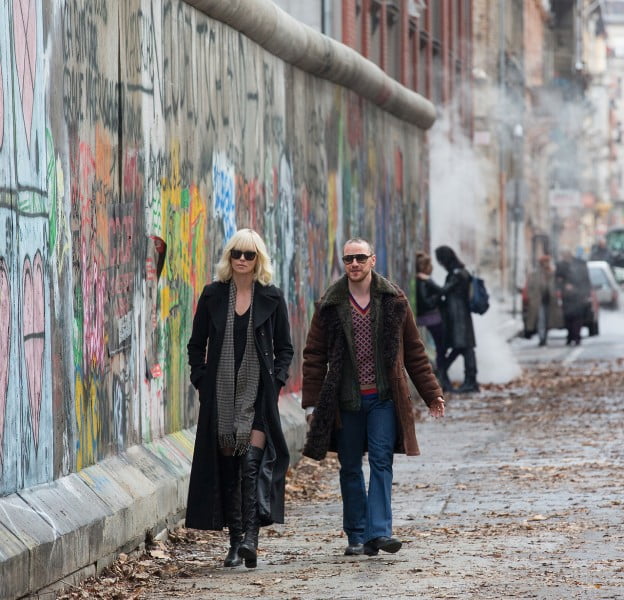 Atomic Blonde plays often to Leitch’s still growing strengths as a director and less to the talents of the cast, all of whom are fine but are taxed with doing more physical lifting, tossing, and grappling than emoting. Theron can seemingly do no wrong when it comes to these types of roles, and McAvoy’s contemptible partner fits in nicely with the actor’s current run of unlikable psychos. Everyone else is fine in their roles, but the film belongs solely to Theron and McAvoy. Even when these characters aren’t beating up on villains or on each other, they’re an enjoyable duo to watch butting heads.

Leitch’s direction is straightforward in terms of storytelling, but vacillates greatly between originality and hackneyed convention in terms of style. The fights are spectacular (included a much talked about battle between Lorraine and some baddies in a stairwell that’s worth the price of admission alone) and the car chases and crashes are impeccable. A cat and mouse chase occurring in an Alexanderplatz movie theatre showing Tarkovsky’s Stalker offers up a bit of knowing humour. It’s not so much the staging, locations, and content of these battles that are the problem, but rather how they’re being captured.

Atomic Blonde seems to exists in one of those bleak universes where everything looks muddy and no one turns a light on unless they’re outdoors, in a public building, something’s on fire, or a neon sign is present. John Wick cinematographer Jonathan Sela does what he can to capture Leitch’s chaotic action, but there’s only so many ways to shoot the same colours over and over again. The sound design is really pitchy and rough at times, and it isn’t helped by a soundtrack packed wall to wall with 80s Europop and electronica (and a strange propensity to play an instantly recognizable song, followed only minutes later by an inferior cover of the same track that was just used). Every punch, kick, stab, and gunshot lands effectively, but instead of looking grimy, Atomic Blonde looks and feels drab even by late 80s East German standards.

Atomic Blonde succeeds as a thrill ride and another triumph for Theron, but not much else. It’s enjoyable and often quite rousing, but the highs are fleeting and somewhat hollow. If it wasn’t so streamlined, I would have thought this was a test run for a much better film waiting to burst through at any moment. It’s fine as it stands, but Atomic Blonde also smacks of missed opportunities.

Check out the trailer for Atomic Blonde: