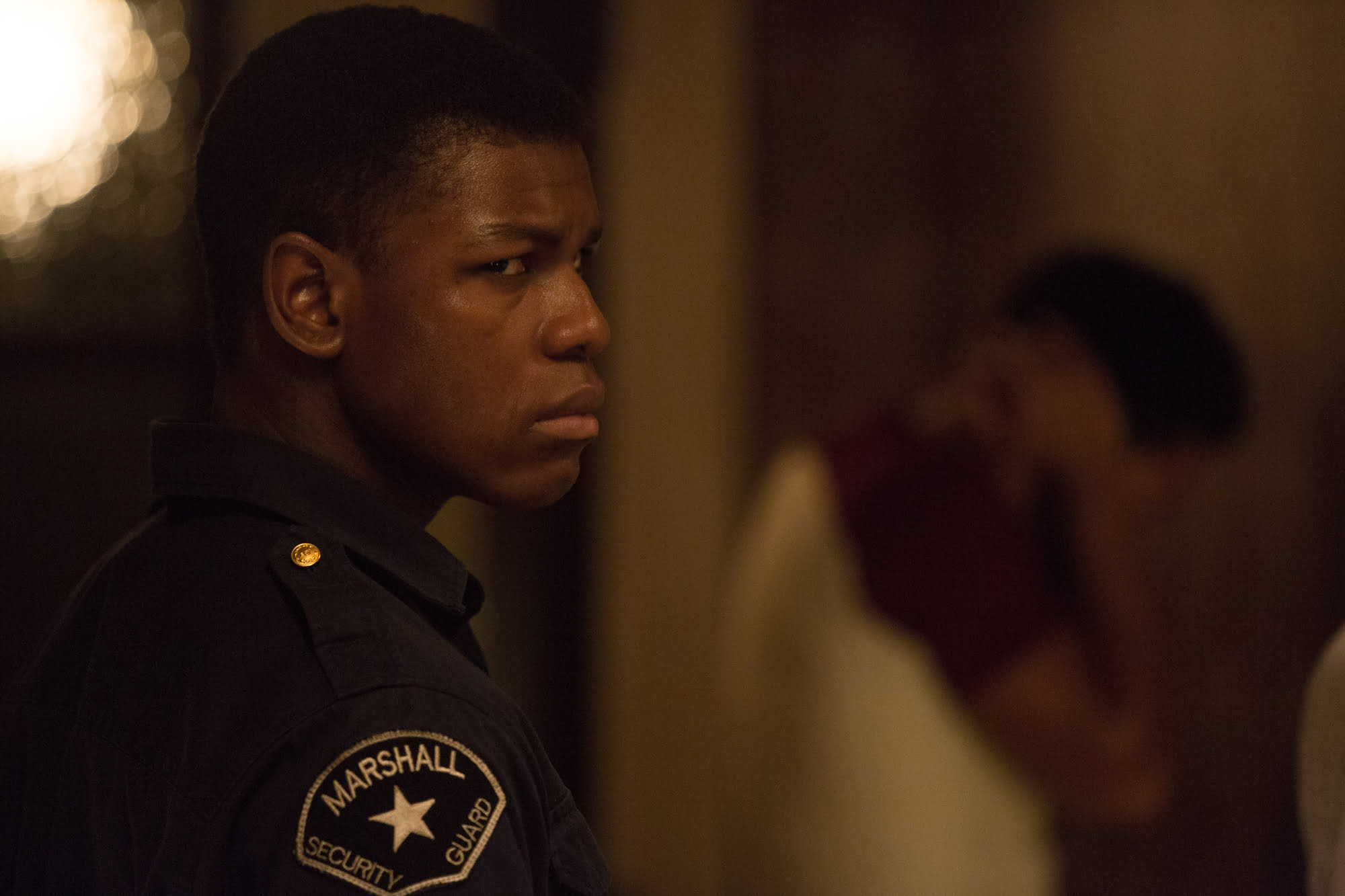 Oscar winning filmmaker Kathryn Bigelow has proven herself to be a master of suspense, with most of her films centering around characters trying desperately by any means necessary to survive another day. Her latest collaboration with The Hurt Locker and Zero Dark Thirty screenwriter Mark Boal, the historical period drama Detroit, is no exception. Built around a sustained sequence of unease, tension, and violence both psychological and physical that will stand as one of her finest filmmaking moments, Bigelow’s look back at rioting and racial injustice in Detroit during the summer of 1967 will haunt the memories of viewers for a long time.

Beginning on Sunday, July 23, 1967 a toxic mixture of police aggression and racial segregation came to a boiling point in the city of Detroit. Riots raged for days, and while Bigelow and Boal look briefly at the early days of protestors clashing with local patrolmen, state police, and the Army National Guard, it’s in service of telling a more intimately chilling narrative that could have easily gotten lost in the shuffle: the murder of three young black men at the hands of white Detroit police officers in the annex of the Algiers Motel on July 25th.

Although Detroit begins with political and social tensions already running at a fever pitch, Bigelow and Boal choose instead to show how life goes on for certain people regardless of what’s going on in the streets. Singer Larry Reed (Algee Smith), a member of the vocal group The Dramatics, sees his chances of landing a Motown contract go up in smoke when the band’s gig is cancelled moments before they’re due to take the stage. Frustrated and finding it hard to get back home amid the skirmishes in the streets, Larry makes his way to the Algiers with his best friend, Fred Temple (Jacob Latimore), to get a room for the night. While there, Fred and Larry begin flirting with a pair of white women staying at the hotel (Kaitlyn Dever and Hannah Murray). They have an intense encounter with Carl (Jason Mitchell), a tough, halfway joking hothead who decides it’s a good idea to rile up nearby troops and officers by firing off a starter’s pistol from the window of his room.

The call of shots being fired is answered by a trio of unethical, openly racist police officers (Will Poulter, Jack Reynor, and Ben O’Toole). Immediately taking control of the operation, the officers force everyone in the annex to line up against the wall – ten African-American males and two white women – and start demanding answers, not only about where the shots were coming from, but why two Caucasian females were spending so much time around black men. When threats, intimidation, and outright beatings don’t work, the ringleader of the officers starts pulling suspects into separate rooms to make the remaining hotel guests think they’re murdering people. The hopes are that these perceived murders – which turn very real – will get people to talk. The tactics of the officers are so extreme that many National Guard members and state police officers leave the scene because they want no connection to anything happening at the hotel.

Uneasily aiding the officers and silently questioning the ethics of the tactics being employed is overworked black security guard Melvin Dismukes (John Boyega). Tasked with protecting a grocery store across the street from the Algiers, Dismukes wants to play both sides, and his week of round the clock shifts has made him weary. He understands the frustration of rioters, but he also wants to uphold the law and deescalate potentially violent situations without force or arrests, something the police on the scene seem incapable of doing. By that same token, Dismukes makes for a somewhat cowardly and ineffective audience surrogate whose stiff upper lip speaks volumes. Boyega, a talent constantly on the verge of a major breakout, speaks with a conviction and cadence that calls to mind Denzel Washington, but it’s in the delicate service of a character that’s decidedly unheroic on basic levels. 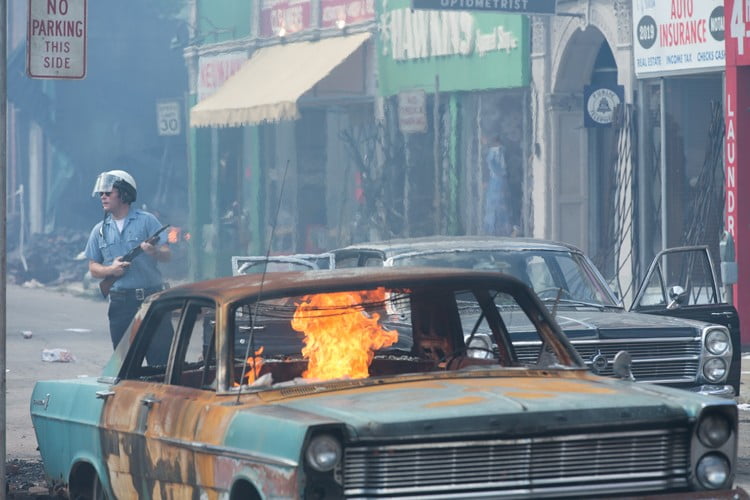 Detroit isn’t built so much around the actual riots, but more around this footnote and the people who lived and died during it. Once the shots ring out at the Algiers, Bigelow’s direction becomes as relentless and raw as an archival newsreel straight from the depths of hell. Almost half of Detroit’s running time feels like we’re watching helplessly as innocent men and women are subjected to unspeakable torture at the hands of those sworn to protect and serve. Bigelow and Boal sometimes awkwardly go out of their way to show that not all police and military members were racist, but the vile hatred exhibited by the filmmaker’s trio of villains is almost too potent for any good to overcome.

This sustained sense of unpredictability and tension is heightened because Bigelow has allowed the viewer to spend a good deal of time with these characters – both good and evil – before setting her tragic, gut churning scene. Smith and Latimore play sympathetic characters, laying bare all of their fears and will to live with a primal urgency. Anthony Mackie appears in a small role as a fellow hotel guest and former Airborne Ranger just back from Vietnam who finds himself targeted by the officers, and he makes the most out of a part that might feel slight in the hands of a lesser performer. Reynor and O’Toole are appropriately loathsome, but Poulter steals the show as the racist squad’s biggest instigator and mastermind, channeling a young Willem Dafoe for the most memorable turn of the young actor’s career.

Detroit doesn’t end with the Algiers incident, however. The trauma and pain is constantly relived through the film’s final third as the trio of officers are forced to stand trial for their actions. What should serve as a period of decompression and closure for the victims becomes another round of racially charged muckraking designed to make the Detroit P.D. look faultless. Bigelow and Boal have taken a look at a fixed point in America’s troubled racial history and appropriately turned a tale of gross misconduct and injustice into a poignant, depressing Möbius strip. The more things change, the more they stay the same, and it’s impossible to not read a deeper meaning into the narrative’s deeper historical significance, albeit one that builds to an unlikely grace note.

Detroit isn’t a perfect film. Bigelow, a white and relatively conservative leaning filmmaker, sometimes feels politically at odds with such left leaning material, and Boal’s screenplay struggles to match the intensity of her filmmaking rhythms once the Algiers tragedy starts unfolding. There are a few “all lives matter” moments that unnecessarily undercut the rage that has been simmering, and while it’s understandable that the most violent villains showcase unfounded racist tendencies, there seems to be an early wallowing in a form of racism that’s pretty self evident. Bigelow and Boal are also unsure of how they want to cast Boyega’s conflicted figurehead, so they ultimately don’t give the actor much to do. Perhaps most damningly, it’s easy to question what Bigelow and Boal actually want to say about systemic and institutionalized racism because they remain so resolutely focused on the nuts and bolts of one specific incident.

None of these criticisms ultimately detract too much from the power of what Bigelow has accomplished here. Detroit is one of the most harrowing and thoroughly depressing films of the year by design. It’s also a film that gives a voice to the voiceless and unjustly forgotten. One could talk about Bigelow’s bold visual style and narrative shortcomings for hours, but Detroit should ultimately praised for not losing sight of what it sets out to accomplish. The people in this specific moment in time are what matters most, and any other inferences are secondary. It’s uneasy ground to stand on, but Bigelow does so with characteristic confidence and conviction.

Detroit opens in cinemas across Canada on Friday, August 4, 2017.

Check out the trailer for Detroit: